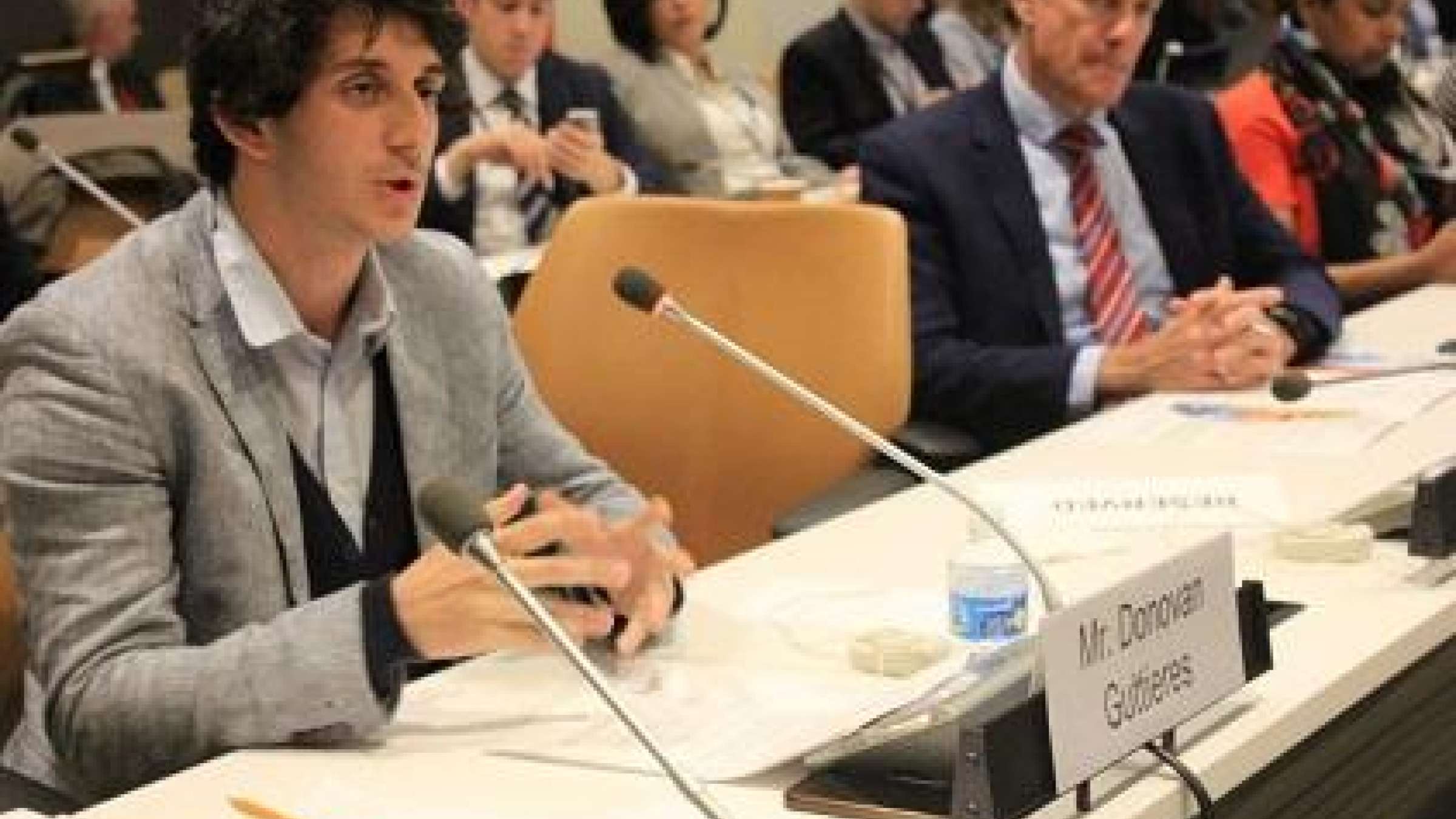 Mr. Donovan Guttieres, of the United Nations Major Group for Children and Youth, makes a point during the discussion on involving communities in reducing disaster mortality (Photo: UNISDR)

NEW YORK, 11 October 2016 - The risk of dying in a hurricane or flood is lower today than it was 20 years ago, in most parts of the world. In Haiti, however, the toll of Hurricane Matthew has already passed 1,000, according to media reports.

The issue of how to reach countries and communities left behind and struggling to reduce their disaster mortality rates was the focus of a meeting at United Nations Headquarters, held ahead of International Day for Disaster Reduction.

Co-hosted by Bangladesh and Switzerland, UNISDR and UNDP, the panel discussion reflected on the theme of this year’s edition of the 13 October annual celebration of successes in reducing disaster risk: “Live to Tell”. The theme raises awareness of actions to meet the Sendai Framework for Disaster Risk Reduction’s target of substantially reducing global disaster mortality by 2030.

“Live to Tell” is the first theme of the “Sendai Seven” campaign which will see each of the Sendai Framework targets – which also include reducing the numbers of affected people and the scale of economic losses -- featured during International Day for Disaster Risk Reduction over the next seven years.

In the discussion, some the world’s most disaster prone-countries shared their success stories. Thanks to investments in early warning and resilient infrastructure as well as public awareness and preparedness, lives can be saved even as urbanisation and climate change are rapidly increasing the number of people exposed to natural hazards.

In Bangladesh, a paradigm shift from the conventional response and relief approach to a comprehensive disaster risk management framework has saved thousands of lives, said Ambassador Masud Bin Momen, Permanent Representative of Bangladesh to the United Nations. In 1970 around 300,000 people were killed by cyclones alone in Bangladesh. By 2007, during heavy flooding, total disaster mortality was reduced to 557. The Government of Bangladesh credits this achievement to a holistic approach that mainstreams disaster risk reduction across national policies and promotes investment in early warning, while fully engaging local governments with defined roles and responsibilities and empowering communities to build resilience at the household-level.

The “Zero Casualty” policy in the Philippines was another successful example shared during the panel discussion. Rolled out nationally following the devastation of Typhoon Haiyan in 2013 – more than 6,000 people perished – the policy provides a comprehensive package of preparedness and awareness strategies, from risk-informed land use plans and relocation of vital infrastructure and commerce, to community-level early warning and evacuation planning and capacity building for local officials. It was put to the test with zero casualties reported when the powerful Typhoon Ferdie bore down on the country’s northern tip this September.

“Our best resources are people” said Ambassador Lourdes Yparraguirre, Permanent Representative of the Philippines to the United Nations.

In Jamaica where significant progress has been made in reducing disaster mortality, 60% of the country remains vulnerable, particularly to weather-related hazards. Ambassador Diedre Mills, Deputy Permanent Representative of Jamaica to the United Nations, advocated for concentrated action at the local level to better understand the needs of affected communities and develop solutions which can address the underlying drivers of their disaster risk.

Speaking on behalf of the United Nations Major Group for Children and Youth, Mr. Donovan Guttieres highlighted the invaluable contribution of young people in saving lives and helping their communities recover from disasters.

“Youth are often the first responders, ready to invest their efforts and risk their lives to help their communities recover from disasters or crisis. Engaging youth will lead to enhanced coordination, communication, participatory engagement, data collection, information dissemination, reporting, and contextualization of prevention, response, and recovery” said Mr. Guttieres.

While sustained international financial and technical partnership for disaster risk reduction is essential, strengthening national and local disaster risk governance and coordination across relevant institutions, combined with the full and meaningful participation of affected populations in designing and implementing disaster risk reduction strategies has proved successful in reducing disaster mortality. This resounding message from the panel discussion is a central tenet of the Sendai Framework.