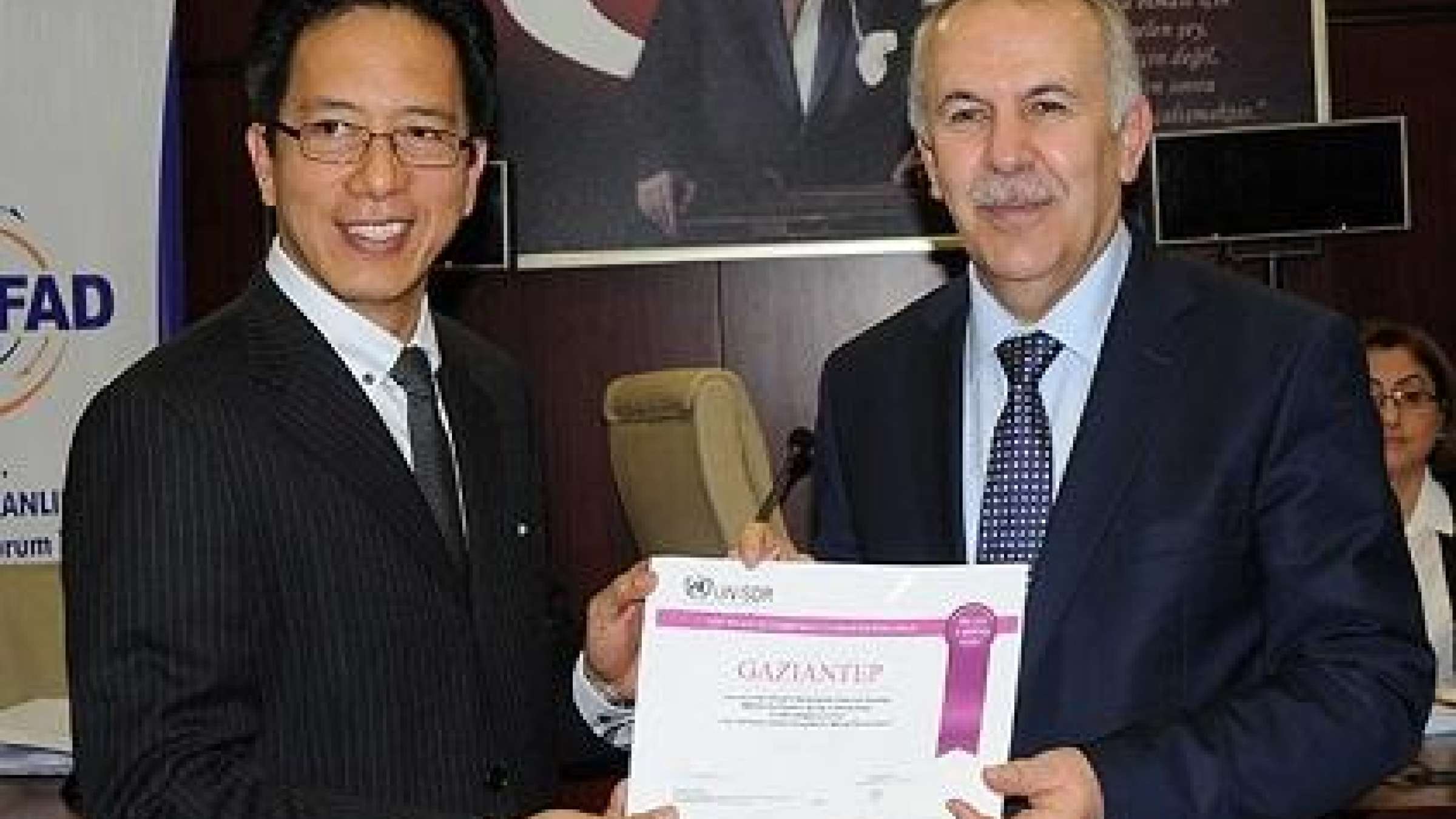 (l. to r.) UNISDR Director of Advocacy, Jerry Velasquez with the Governor of Gaziantep, Erdal Ata, at Gaziantep's joining of the MCR Campaign.

The expert meeting brought together over 70 representatives from local and national authorities involved in disaster risk reduction and celebrated Gaziantep’s achievements in increasing citizen awareness on the importance of disaster resilience.

AFAD Director General Dr. FuatOktay, said that “building disaster resilience at the local level is the backbone of [Turkey’s] sustainable development and the UNISDR Making Cities Resilient Campaign’s ‘10 Essentials’ are the key to building cities’ resilience to disasters.”

The Campaign’s Ten Essentials are a checklist for building resilience and include putting in place organization and coordination; assigning a budget for disaster risk reduction; urban planning based on risk assessments and assessing the safety of all schools and health facilities.

UNISDR’s Director of Advocacy, Jerry Velasquez, said: “Joining the UNISDR Making Cites Resilient campaign is a major step forward for Gaziantep in pro-actively building its present and future resilience and I look forward to seeing many other Turkish cites joining the campaign inspired by this event in Gaziantep.”

There is growing awareness across Turkey for the need for better preparedness. The country is especially prone to earthquakes and floods, and Gaziantep, with a population of almost 1.4 million, is no exception.  The Governor of Gaziantep, Erdal Ata, stressed the importance for the city to be part of the “Making City Resilient” Campaign along with over 1,760 other cities and towns around the world. Gaziantep is the fourth city in Turkey - after Antalya, Istanbul and Yalova - to officially join UNISDR’s Campaign.

The UNISDR Making Cities Resilient Campaign was launched in 2010. Grounded in the global agreement on disaster risk reduction, the Hyogo Framework for Action, the campaign aims at creating a global network of cities of different sizes, characteristics, risk profiles and locations. The campaign promotes media and public awareness activities, and facilitates access to existing knowledge, tools and experience.

The “10 Essentials”, developed for the Campaign, serve as the basis for the commitments towards its objectives. Local governments that sign up to the Campaign are requested to undertake a self-assessment exercise via the so-called Local Government Self-Assessment tool (LGSAT) that was developed by UNISDR in 2011 following a pilot with 23 cities in 16 countries.

More recently, UNISDR added the Disaster Resilience Scorecard for use by members of the Campaign to check their progress and identify gaps in their resilience. The scorecard was developed by IBM and AECOM and is available online, free to all.

In addition to promoting disaster risk reduction at the local level, Turkey has also been actively involved in building school safety and resilience. The country’s commitment to this topic will translate into raising its profile and highlighting it during the 2015 World Conference on Disaster Risk Reduction (WCDRR). In addition, a major upcoming event on the topic of earthquakes and Turkey is the Second European conference on earthquake engineering and seismology (2ECEES), 24-29 August 2014 in Istanbul.

The Gaziantep event was supported by the project “Building Resilience to Disasters in Western Balkans and Turkey” co-financed by the European Commission through the Instrument for Pre-accession Assistance and co-implemented by UNISDR together with the World Meteorological Organization (WMO).