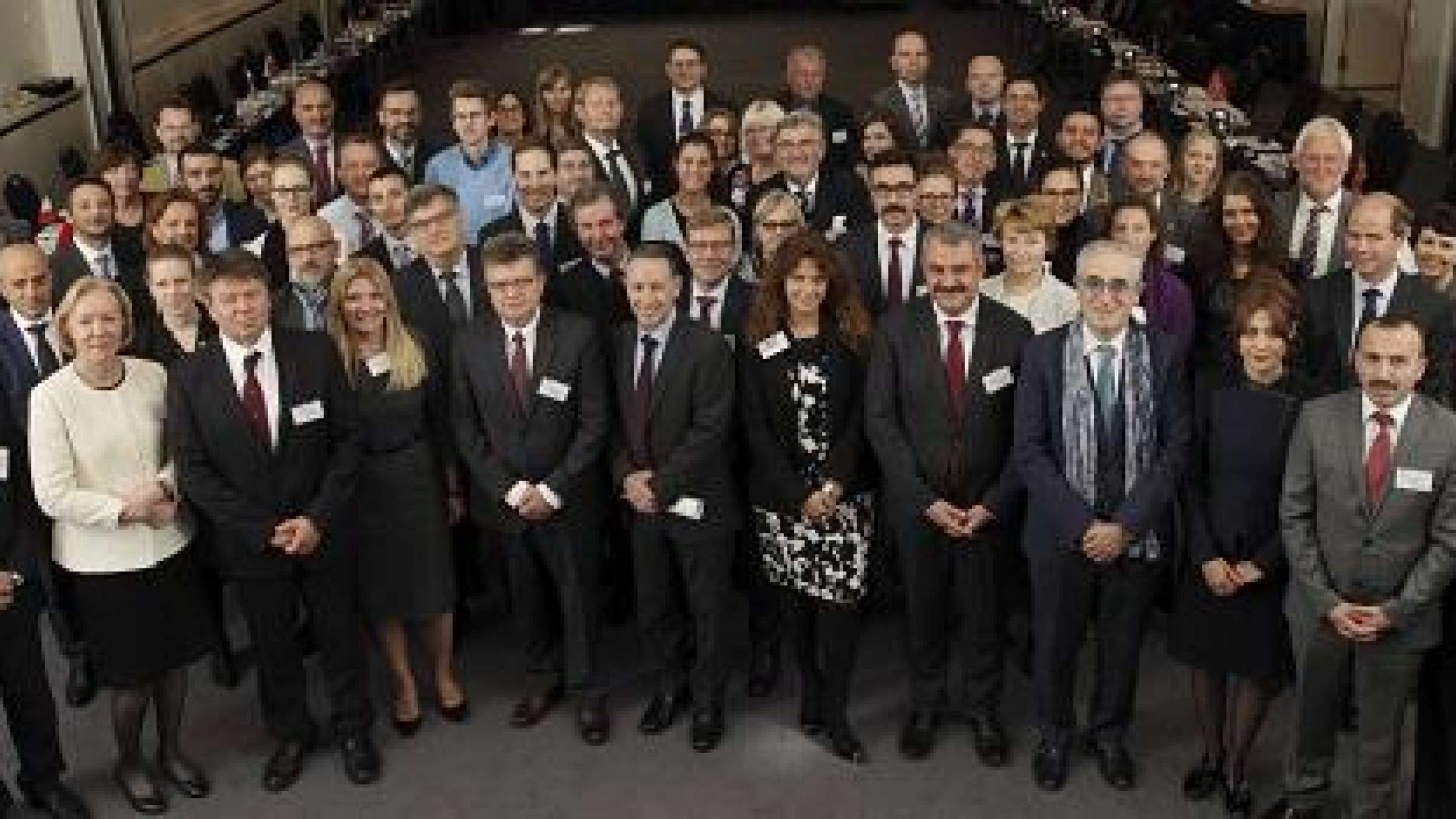 Participants at the 7th Annual Meeting of the European Forum for Disaster Risk Reduction, who together aim to accelerate efforts to curb the threat of natural and man-made hazards (Photo: Pasi Autio)

HELSINKI, 3 October 2016 – Europe today began its annual talks on curbing the threat of natural and man-made hazards, with the aim of accelerating efforts to achieve the goals of the Sendai Framework for Disaster Risk Reduction.

The 7th Annual Meeting of the European Forum for Disaster Risk Reduction, chaired by Finland and running until Wednesday, brings together experts from 30 countries within the European Union and beyond, as well as the European Commission and other regional bodies.

“This is a very difficult moment, not only in Europe, but globally. We are facing several simultaneous crises. Crises of migration, terrorism, flagging economic growth in many places, conflict and rising international tensions,” Mr. Robert Glasser, the UN’s Special Representative of the Secretary-General for Disaster Risk Reduction and head of UNISDR, told delegates.

“Vigilance and forward planning for worst-case scenarios are particularly important in a century when climate change is expected to increase the frequency and intensity of weather-related hazards and significantly impact on economic and social development,” he said.

“Inside Europe, with floods in Germany, France and in the Balkans, with the recent earthquake in Italy, and the many forest fires across Europe during the summer, in Portugal, Spain, Greece, Cyprus,” he said in a video address.

“But also outside Europe. We all know that challenges will continue to come. With climate change, the number and impact of natural disasters will certainly increase. We must prepare better. We must address the risks before a disaster strikes, before lives are lost. Preparedness is always better than cure.  This is a collective effort. It requires collective action,” he said.

The meeting comes four months after the European Commission – the European Union executive – adopted a plan to implement the Sendai Framework.

A wide-ranging global blueprint, the 15-year Sendai Framework was approved by UN member states in 2015 in the Japanese city of Sendai.

“We’re here because last year in Sendai we managed to agree on an agenda for the next 15 years,” said Mr. Kai Mykkänen, Finland’s Minister for Foreign Trade and Development, opening the European Forum in the presence of high-level participants who also included former President of Finland and UNISDR champion Ms. Tarja Halonen, Mr. Petteri Taalas, Secretary-General of the World Meteorological Organization, and Mr. Eladio Fernandez-Galiano, Executive Secretary of the Council of Europe's EUR-OPA Major Hazards Agreement.

The Sendai Framework aims by 2030 to achieve substantial reductions in lives lost, numbers of people affected, and economic damage. To spur the effort, it calls for a huge increase by 2020 in the number of countries with specific disaster risk reduction strategies.

“In Europe, disasters have cost billions in damages each year. Therefore mitigation of losses is crucial for the welfare and prosperity of the region,” said Ms. Mora Maira, Director General of the Secretariat at the Council of the Baltic Sea States.

“Different kinds of disasters – natural or man-made – may be lurking from any corner. However, the approach the Sendai Framework promotes, and the agenda the European Forum presents regarding disaster risk reduction – rather than disaster reduction – stress that we should not be bystanders who observe events and act wisely in the aftermath of those events. Rather, the new agenda is about learning from past events and being prepared,” she added.

The annual European Forum has catalysed the continent’s efforts to build resilience to disasters.

Some 32 European countries now have a legal framework on disaster risk reduction, compared to five in 2005. And there are over 650 European communities in UNISDR’s flagship Making Cities Resilient network, a twentyfold rise from 2010.

"The rest of the world also looks to Europe for cooperation, support and guidance on how to increase the number of countries with national and local disaster risk reduction strategies and access to multi-hazard early warning systems and disaster risk information and assessments," said Mr. Glasser.

At its 2015 meeting, chaired by France, the European Forum decided to focus its Sendai Framework work on climate change, the environment, the private sector, health, and persons with disabilities, all at national and local levels. It is now setting concrete targets.

The Sendai Framework was the first in a series of international accords adopted in 2015 and 2016, including the Sustainable Development Goals, the Paris Agreement on climate change, the World Humanitarian Summit declaration and the upcoming Habitat III agreement on housing and urban development.

Together, they aim to help the world meet the steep challenge of reducing poverty and disaster risk, amid increasingly frequent and intense climate change impacts.

“We now need to move towards rapid implementation of these commitments. This is urgent. Time is of the essence,” said Mr. Stylianides.