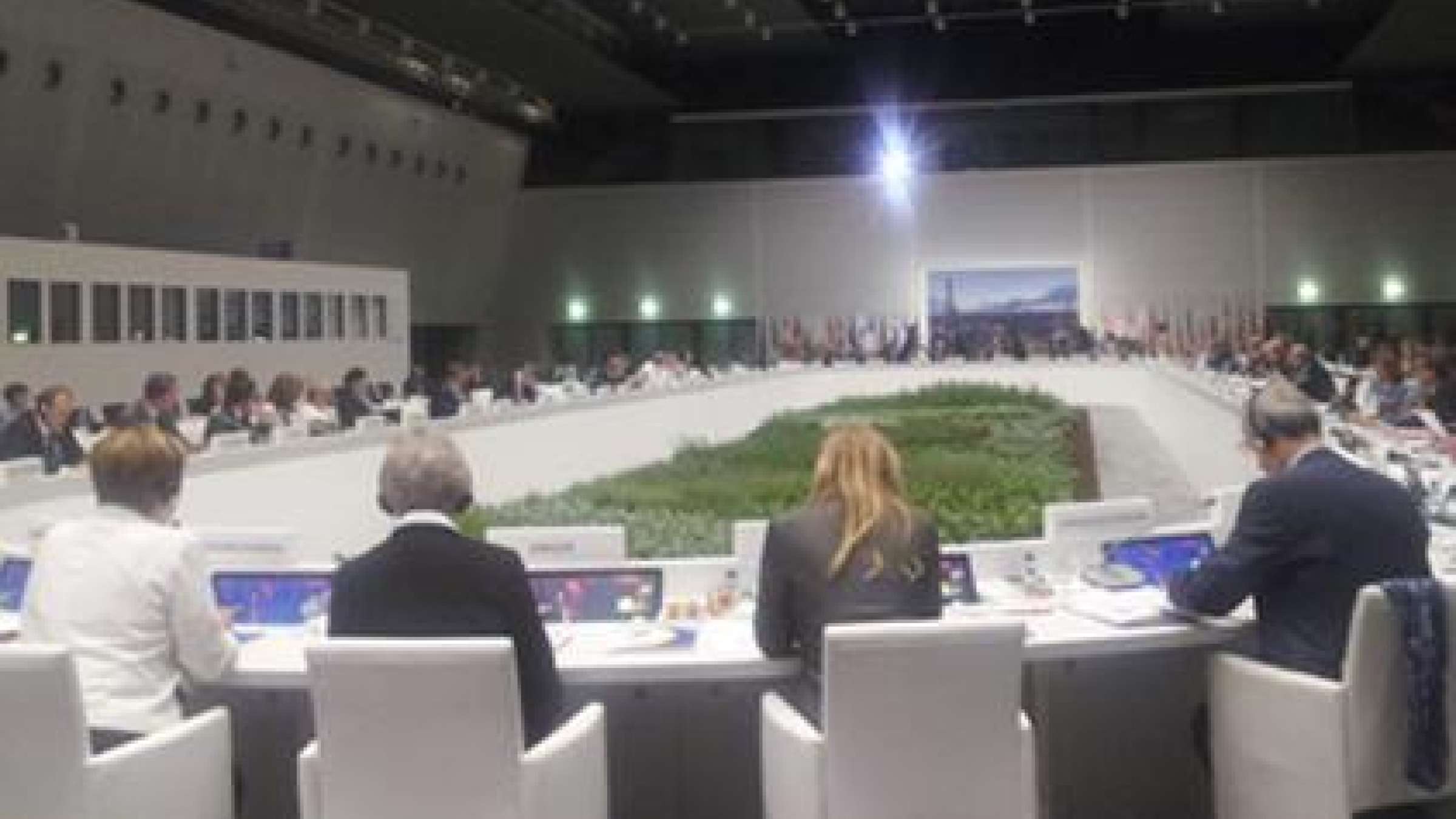 Representatives from 40 countries convened in Milan this week and agreed recommendations for a new global agreement on disaster risk reduction.They were hosted by the Italian Presidency of the EU Council. (Photo: UNISDR)

The Post-2015 Framework will be adopted at the Third UN World Conference on Disaster Risk Reduction in Sendai, Japan, in March 2015. Next week’s PrepCom is a significant milestone in the process of drafting it.

The Milan Declaration of this week’s European Ministerial Meeting, highlights “with concern the increasing economic impact of disasters and climate change in Europe. Despite the fact that much progress has been made in reducing mortality from disasters, much remains to be done.”

Speaking on behalf of the meeting host, the Italian Presidency of the EU Council, Minister of Interior, Angelino Alfano, said: “During three special sessions, we heard some important reflections on the relevance of linking the converging agendas of building resilience to disasters, climate change and sustainable development through smart growth.

“We discussed the relevance of governance and accountability and we pointed out the importance of risk governance and monitoring, peer reviews for measuring progress on engagement, and fostering innovation and technology as a means to support future capacity for a resilient world.”

The Milan Declaration acknowledges “the substantial contribution of the Hyogo Framework for Action 2005-2015 to the formulation of strategies and policies for disaster risk management.”

It contains 24 recommendations including the delivery of results, measuring progress and encouraging “implementation by setting targets at the appropriate level (global, national, regional and local) and with an appropriate timeframe. The targets need to be politically acceptable and operationally feasible, measurable, achievable and result-oriented.”

The Declaration calls for “safe school and hospital policies and programmes as a priority for action at the local, national and regional levels.”

It also recognizes “women as a force in resilience building. The way forward to women leadership integration requires a shift in approach capturing the mutually reinforcing relationship between disaster and climate risk, choice of development pathways and gender equality towards transformation in policy and practice.”

Kristalina Georgieva, EU Commissioner for International Cooperation, Humanitarian Aid and Crisis Response, said: “We have been working hard to come to a common position for Europe on the agreement coming up to the World Conference in Sendai, Japan. What is at the heart of it is a commitment to comprehensive and coherent disaster risk management making disaster risk reduction the task of everyone.”

Margareta Wahlström, Head of the UN Office for Disaster Risk Reduction, said: “Europe’s leadership on disaster risk management is vital for the adoption of a robust new global agreement on disaster risk reduction at the Third UN World Conference on Disaster Risk Reduction in Sendai, Japan, in March 2015. We heard strong evidence today from several European countries that investing in disaster-proof infrastructure results in real savings when disaster strikes.”

Yasutoshi Nishimura, Senior Vice-Minister of Cabinet Office, Japan, said his country was encouraging Heads of States and representatives at the highest level of government to attend the Third UN World Conference on Disaster Risk Reduction, in Sendai, Japan. He also gave a review of the reconstruction process in the wake of the 2011 Great East Japan Earthquake and Tsunami and said many people living in tsunami-exposed location have been relocated to the higher locations.

Prefetto Franco Gabrielli, Head of Department, National Civil Protection Department, said: “Effective policies for the reduction, prevention and risk management are essential to guide investment and to reduce the impact of disasters in order to save lives and protect people’s welfare and the environment, especially in a historical moment in which much remains to be done in terms of sustainable development and adaptation to climate change.”

Eladio Fernandez-Galiano, Executive Secretary, EUR-OPA Major Hazards Agreement, the Council of Europe, noted: “We commit to examine carefully the conclusions of the post-2015 framework for disaster risk reduction so as to align our priorities in the field with that guidance. We will continue our support to the European Forum for Disaster Risk Reduction, our focus on vulnerable populations, as well as our support to the UNISDR Making Cities Resilient Campaign.”

Other contributions by country:

BELARUS: Belarus is ready to commit to establishing the research and scientific platforms for the development and implementation of innovative solutions in the field of disaster risk reduction and to foster public-private partnerships.

CROATIA: The country’s national priority remains carrying out a disaster risk assessment which will form the basis of a National Disaster Risk Reduction Strategy. The Hyogo Framework for Action has been a great tool for strengthening resilience.

FINLAND: Based on lessons learned from HFA implementation and two peer reviews, DRR can only be effective if it is done at all levels of society. The future international framework for DRR should highlight action at the local level.

GREECE: Disasters pose a significant threat to development efforts and poverty reduction. Risk reduction, prevention and management policies are essential to reduce the impacts of disasters in order to save lives, to protect the environment, mitigate climate change, and to ensure sustainable development, poverty eradication and economic growth worldwide.

NETHERLANDS: We could share more data about reducing risks and building resilience. More open data acts as fuel for science and technology.

RUSSIAN FEDERATION: Russia is ready for action at all levels to provide assistance to those hit by disasters, we need to take international cooperation to a new level not only in terms of risk management but response.

SERBIA: Having recognised the need to upgrade the disaster prevention, protection and response system, the Government of the Republic of Serbia and the Ministry of the Interior have set the integration of risk reduction into development policies and plans as one of the key goals.

SPAIN: Spain has taken special care to ensure the integration of new technologies its work on disaster risk reduction. This year, Spain will host the European Forum for Disaster Risk Reduction (EFDRR) in Madrid in October.

SLOVENIA: Over 116,000 households in Slovenia were without electricity for up to five days due to winter weather in 1914. Commitments to the new DRR framework will be reflected in a new five-year plan to be adopted next year after the World Conference.

SWEDEN: Sweden will continue to be very active in promoting a close link between the HFA and EU initiatives aimed at preventing and building resilience to disasters. The HFA has contributed to a common language for collaboration. It’s important the new framework should be more inclusive and gender-sensitive.

SWITZERLAND: Only by working together can we build resilience. Sustainable land use is vital to reduce risk to a minimum. The challenge of risk reduction is a permanent challenge which we can only cope with through an integrated risk management system.