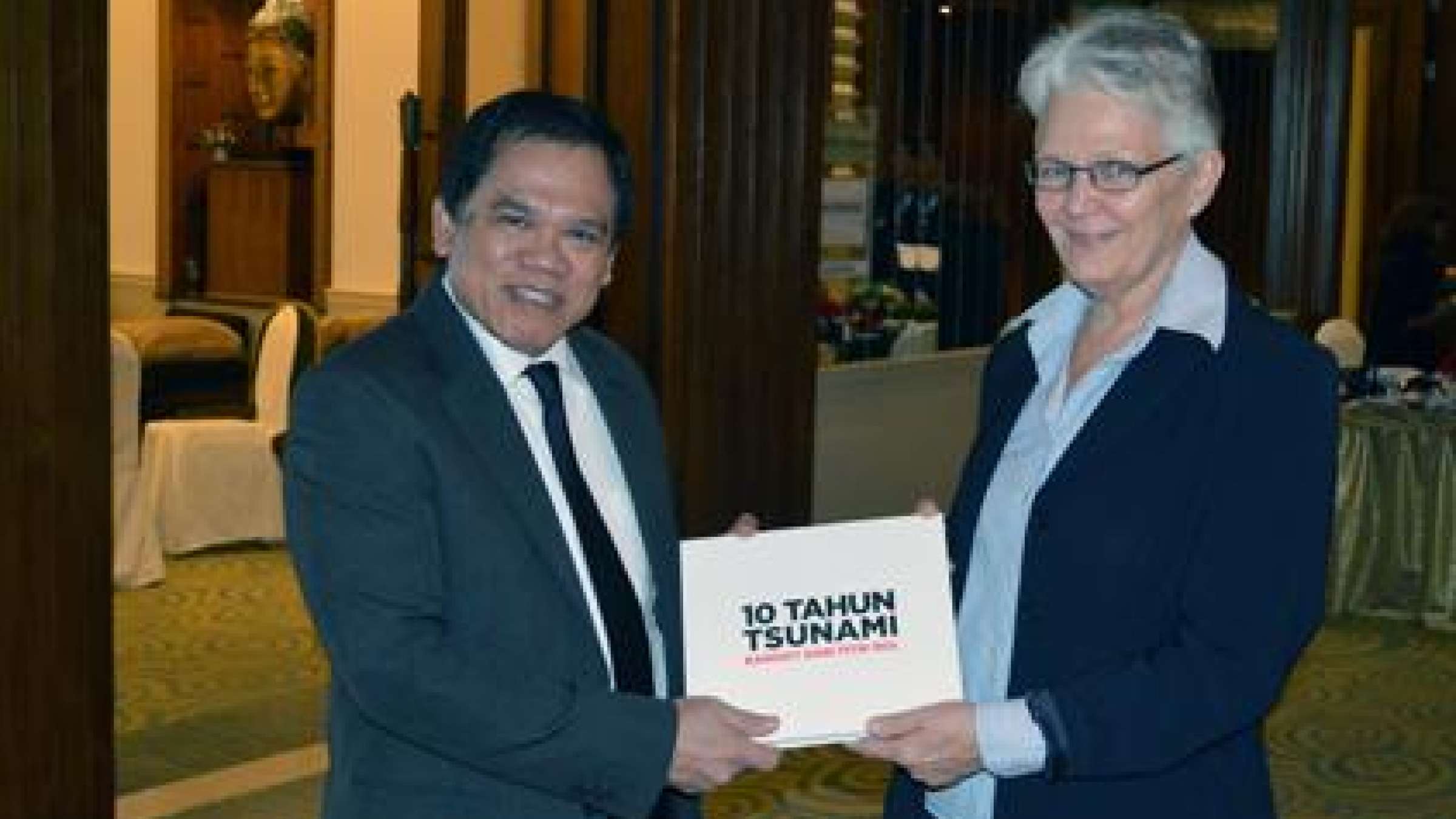 The tragedy, which echoed around the globe, threw the spotlight squarely on just how vulnerable the world is to natural hazards. It was also a stark reminder of the importance of tackling disaster risk head on, by bolstering preparedness and resilience. As such, it spurred a renewed, collective international effort to reduce risk, loss of life and economic damage.

“Ten years after the Indian Ocean Tsunami, the world has taken significant measures to make the world a safer place against disasters,” said Margareta Wahlström, head of the UN Office for Disaster Risk Reduction (UNISDR).

“We now have more efficient early warning systems and better evacuation procedures in place. This is also greater understanding and awareness globally of the broad damage that disasters can inflict on our societies,” she added.

Wahlström, at the helm of the international response and recovery effort a decade ago, is in the region this week to attend commemorative events including a December 26 panel discussion entitled “The Indian Ocean Tsunami: 10 Year On. From Learning to Action” in Khao Lak, Phuket, Thailand.

Just three weeks after the tsunami, countries from around the globe came together in Kobe, Hyogo, Japan to craft an international accord to reduce disaster risk and losses. Moved and stunned into action, they adopted the Hyogo Framework for Action, the world’s first comprehensive agreement on disaster risk reduction. It paved the way for a new mindset.

“Since the Indian Ocean tsunami and the adoption of the Hyogo Framework for Action in 2005, there have been substantial changes in the global thinking regarding disaster risk reduction issues. The tsunami acted as a wake-up call and made us understand how vulnerable we are to hazards. We cannot avoid natural hazards, but we know enough, to certainly, prevent them to become disasters,” Wahlström explained.

The tsunami was a huge economic blow, causing an estimated 9.9 billion USD in damage. But beyond that immediate impact, it left long-term human and environmental scars.

The 227,000 fatalities hailed from 14 countries across the Indian Ocean, and also included 9,000 foreign tourists from dozens of other nations, making it the worst single disaster affecting such a swathe of the globe. The tsunami had severe psychological and social consequences, as well as long-term negative environmental and development impacts. Land was contaminated by salt water, forests damaged and ecosystems harmed. Overall, this affected the speed and nature of the recovery process in most of the countries across the region.

One major life-saving measure to emerge from the disaster was the Indian Ocean Tsunami Warning System, which now provides alerts through three regional watch centres in India, Indonesia and Australia, and a network of 26 national tsunami information centres. It is an efficient system which disseminated early warnings within eight minutes of the Banda Aceh earthquake in 2012. Other steps have included constructing buildings better able to withstand a hazard.

The milestone Hyogo Framework for Action covered the period from 2005 to 2015. A new framework will be on the table next year at the Third UN World Conference on Disaster Risk Reduction (WCDRR), taking place in Sendai, Japan, from March 14 to 18. The conference will adopt a new framework which will complement new global agreements on climate and sustainable development goals.

“Sendai is a generational opportunity to build on the foundations which have been laid over the last ten years and to ensure that the experience and learning of the Indian Ocean tsunami continue to be applied in order to reduce existing levels of risk and to avoid the creation of new risk,” said Wahlström.

“One great lesson of the Indian Ocean Tsunami is that we must build and plan our coastal urban areas in a more sustainable and responsible way. We must become more intelligent and aware in managing the risks around the location of critical infrastructure in hazard prone areas whether the threat comes from floods, storms, earthquakes, heat waves or something else,” she added.

At the end of the rich and informative panel discussion, a number of recommendations were proposed and will be taken to Sendai. Among them is the urgent need to strengthen “the last mile” of early warning systems and to enhance the understanding of risks among coastal communities, as well as the ability of private and public sector organizations to reduce future losses due to climate change challenges.

The panel highlighted critical issues such as standardized messaging, information and signage for travellers and communities in a very mobile world. The standardization will help ensure that individuals are better prepared.

“Hotel resilience can become a competitive advantage as the entire world will be affected by more severe and frequent weather related disasters in the future ,” said Jayne MacDougall, Director of Risk Management and Loss Prevention, at Le Meridien Phuket Beach Resort, in Thailand, which is part of the global Starwood stable.

“At Starwood, safety starts with the site of the hotel and a comprehensive risk assessment is conducted. Location is important, and assessing risks is the key to better protect people and assets,” said MacDougall, a speaker at the Khao Lak discussion, referring to an initiative being developed along with the UNISDR regional office in Bangkok, the Global Initiative on Disaster Risk Management (GIDRM) and the Pacific Asia Travel Association (PATA).

Also on the panel was Sugeng Triutomo, former Deputy Chief of Prevention and Mitigation at the National Disaster Management Agency (BNPB) of Indonesia.

“Strengthening local level resilience is also crucial to make communities safer against disasters. Indonesia has been one leading example after the tsunami in 2004 investing a lot in decentralization to empower more communities to deal with disaster risks,” he said.

The Sendai conference is a crucial part of that process.

“The UN Word Conference on Disaster Risk Reduction will be the next opportunity to review what has been learned over the past 10 years and renew our commitment to disaster risk reduction, so all the losses we are commemorating today will not be lost for nothing,” concluded H.E. Thani Thongphakdi, Ambassador of Thailand to the UN office in Geneva, who is co-chair of the conference preparatory committee.

Later on Saturday, Wahlström attended a remembrance ceremony organized by the government of Thailand along with foreign dignitaries.

On Saturday, she is scheduled to visit a disaster-resilient community project at the fishing village of Ban Nam Khem in Phang Nga province, near Khao Lak and Phuket. The village was battered by the tsunami, which killed more than 1,400 of its people and destroyed 1,000 houses.

Ban Nam Khem now represents a model center for learning on community-based disaster preparedness response and recovery efforts, having applied national recovery policies as well as implementing its own planning process and a number of self-reliance measures. They include evacuation areas, food supplies, search and rescue programmes, as well as systems to collect and analyze data to reduce and prevent future losses.