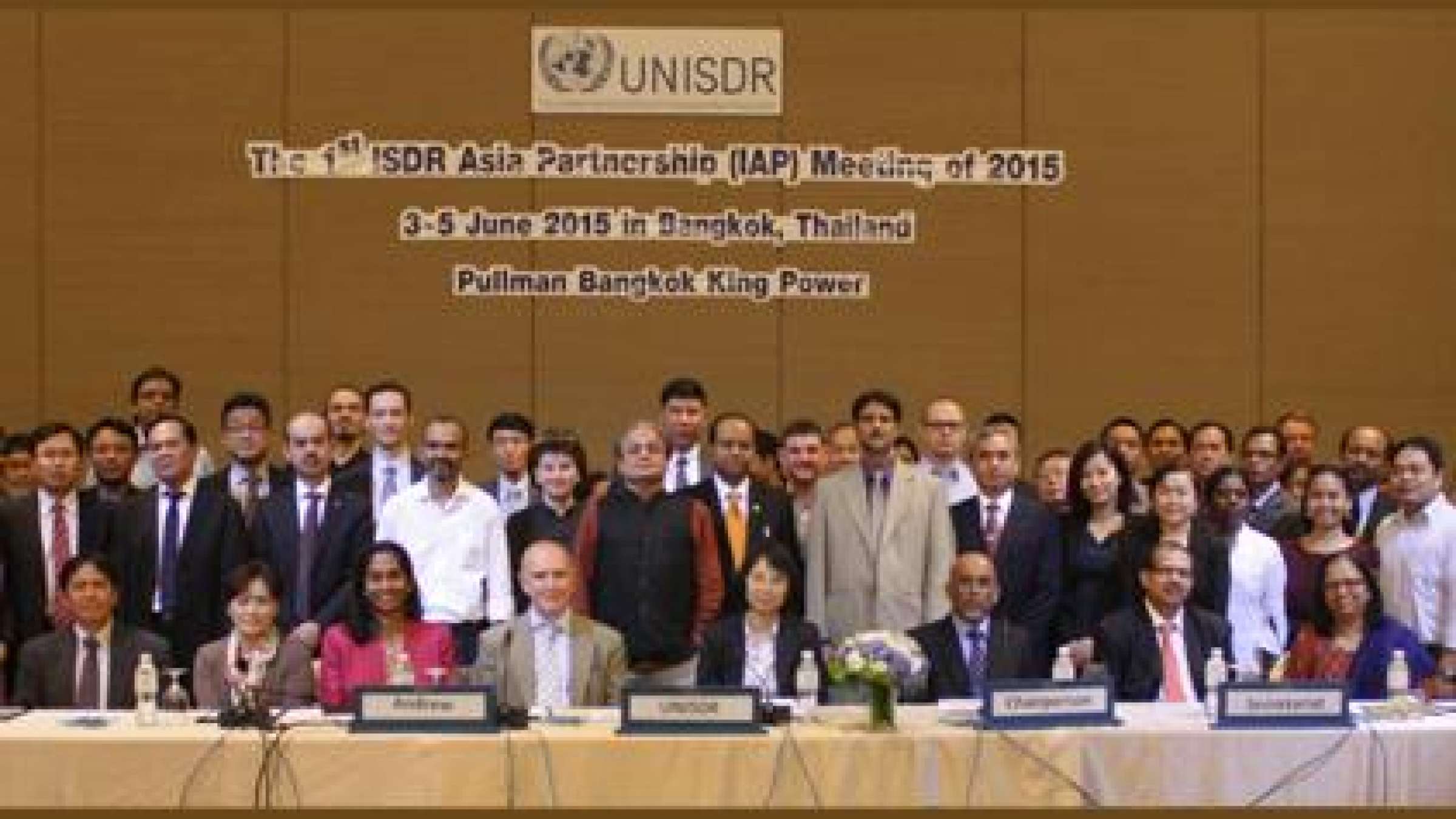 Over 90 representatives from 17 countries in Asia and various regional and international organizations attended this week's ISDR Asia Partnership meeting in Bangkok. (Photo: UNISDR)

BANGKOK, 6 June 2015 - Seventeen of the world’s most disaster-prone countries are meeting this week in Bangkok to discuss how to press forward with implementation of the Sendai Framework for Disaster Risk Reduction across Asia.

There has been lively debate about how to achieve the Sendai Framework’s seven targets with a focus on reducing mortality, numbers of people affected, economic losses, damage to critical infrastructure and improving early warning systems.

Asia is home to 80% of the world’s disasters ensuing from natural hazards and countries throughout the region are embracing the Sendai Framework’s switch in emphasis from disaster management to disaster risk management, seeking to eliminate or mitigate the impact of underlying drivers of risk such as poor urban planning, non-compliance with building codes and destruction of eco-systems.

Indonesia, a regional champion of DRR ever since the Indian Ocean tsunami, presented a road map for the implementation of the Sendai Framework over the next 15 years to the first ISDR Asia Partnership Meeting held since its adoption.

Dr. Raditya Jati of the Indonesian National Disaster Management Agency (BNPB) said: “Indonesia is facing many disaster risks and there is a real urgency to put the Sendai Framework into practice as soon as possible and to deliver a national implementation plan that will be efficient at the local level as well.”

Indonesia is adjusting its existing Disaster Management Plan to align it with the Sendai Framework. Over the next four years, the focus will be on making district/city level multi-hazard risk analysis available as well as damage and loss reports to ensure better understanding of disaster risk.

Ms. Anoja Seneviratne , Director, Sri Lanka, Disaster Management Centre, said: " We have had an initial conversation with all stakeholders using the national platform for disaster risk reduction and we have seen that the preparedness at the local level is not sufficient and more risk assessments are needed.

“We are going to disseminate more information on the benefit of risk assessment and risk sensitive investments encouraging tools such as disaster impact assessments.”

Indonesia, Mongolia, Thailand and Vietnam stated they have already translated the text of the Sendai Framework, adopted by UN member States in March, at the World Conference on Disaster Risk Reduction in Sendai, Japan, and endorsed yesterday by the UN General Asssembly.

The Sendai Framework, the first such agreement to set out targets for a substantial reduction in mortality and disaster losses, is now available in all six UN official languages.

Over 90 representatives of Asian national governments and sub-regional intergovernmental organizations, members of international financial institutions and the private sector, the UN and the civil society are spending three days considering Asian priorities. They have also been taking on board the findings of the 2015 Global Assessment Report on Disaster Risk Reduction - "Making Development Sustainable: The Future of Disaster Risk Management".

Feng Min Kan, Head of the UNISDR Asia-Pacfic Regional Office said: “We know what can be done to make Asian communities and nations more resilient against disasters The new Sendai framework offers a wide range of solutions that are crucial to most Asian economies, which continue to be negatively affected by disasters.

“We hope that this IAP meeting will encourage a shift from managing disasters to managing risks, and guide countries towards more national and local actions that will reduce existing risks and avoid creating new ones to build a more resilient world.”

This is particularly urgent in Asia where some 60 per cent of the area expected to be urbanized by 2030 remains to be built, says the GAR 2015.

The ISDR Asia Partnership (IAP) launched in 2004 meets twice a year and provided the necessary regional consultation and technical support to implement the 2005-2015 Hyogo Framework for Action which has now been succeeded by the Sendai Framework for Disaster Risk Reduction 2015-2030.

The two IAP meetings also constitute the main preparatory sessions of the Asian Ministerial Conference for Disaster Risk Reduction which is held every two years and set the main disaster risk reduction agenda in the region.

The next Asian Ministerial Conference will be hosted by the Government of India in 2016 and will also focus on the “Asian Regional implementation plan of the SFDRR”.