On November 5, the Heads of Emergency Authorities of Central Asian States at the Regional Forum in Tashkent adopted a Strategy for Development of Cooperation Between Central Asian Countries in Disaster Risk Reduction for 2022-2030 to accelerate the implementation of Sendai Framework targets in the region.

The strategy represents a major step forward in deepening regional collaboration. Central Asia and all countries are facing increasing large-scale and transboundary disasters, as the COVID-19 pandemic and climate change has demonstrated. The approach taken by governments of Central Asian countries through further strengthening of bilateral, multilateral and regional cooperation is therefore crucial for ensuring greater disaster resilience.

The heads of emergency authorities of the Republic of Kazakhstan, the Kyrgyz Republic, the Republic of Tajikistan and the Republic of Uzbekistan agreed together on promoting cooperation in resilience and disaster risk reduction and management in the region.

Mr. Tursinkhan Khudaibergenov, the Minister of Emergency Situations of Uzbekistan noted in his opening remarks that cooperation between countries of Central Asia became more closer and stronger in prevention and response to disasters. The cross-border hazards inflict serious losses to all countries of the region, and collaboration among emergency management authorities is crucial “. He stressed the need of building capacities of NDMAs, and collaboration in the border areas.

Mr. Yuriy Ilin, the Minister for emergency situations of the Republic of Kazakhstan underlined the importance of developing an early warning system in case of an earthquake, which ultimately will allow to combine scientific potential and practical actions to develop a network of seismic sensors for early warning of the population in the region.

In his speech, Mr. Bobek Azhikeev, the Minister of emergency situations of the Kyrgyz Republic marked the importance of coordinating the activities of emergency authorities of the countries of the region, international and non-governmental organizations, and other interested parties in carrying out a humanitarian operation in case of emergencies of a transboundary nature.

Mr. Rustam Nazarzoda, the Chairman of the Committee for emergency situations and civil defense under the Government of the Republic of Tajikistan said that the adopted documents are comprehensively worked out, they will certainly play an important role in strengthening cooperation between emergency authorities of Central Asian countries in disaster risk reduction and climate change adaptation. 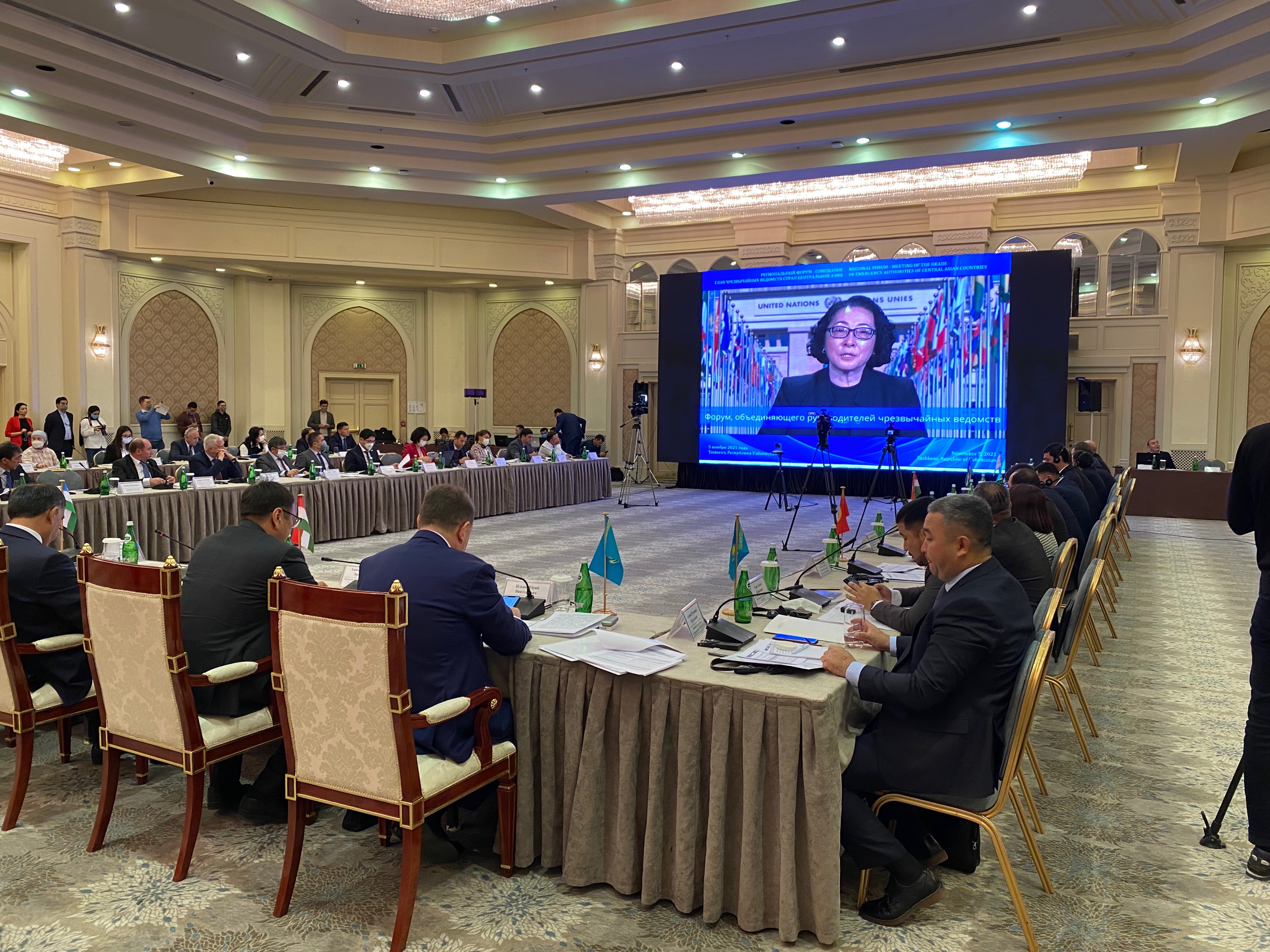 Ms. Mami Mizutori, Special Representative of the UN Secretary-General for Disaster Risk Reduction Head of UNDRR emphasized the importance of the regional strategy for “Central Asia’s recovery from the pandemic and applying the lessons learned to improve disaster preparedness across the region in the face of the climate emergency.”

At the event, Mr. Octavian Bivol, UNDRR Chief for Europe and Central Asia highlighted the importance of the role, which Heads of NDMA play in rallying a whole-government, whole-society in approaching disaster not only in preparedness, response and recovery but also, most importantly and increasingly in prevention.

Mr. Mindaugas Kacerauskis, Head of the political and press at the European Union emphasized the importance of cooperation between Central Asian countries and heads of authorities responsible for disaster prevention.

The high-level event was hosted by government of Uzbekistan and supported by the Center for Emergency Situations and Disaster Risk Reduction in its function as Secretariat of the Forum. It took place as part of the UNDRR initiative “Building disaster resilience and accelerating the implementation of Sendai framework for DRR in Central Asia” funded by the European Union. More than 60 participants from government, UN, international technical assistance organizations, European Union and the World bank attended the event.

The next Forum will be held in Dushanbe, Tajikistan in 2022.

The Strategy for the Development of Cooperation of Central Asian Countries in Disaster Risk Reduction for 2022 - 2030 was developed by experts of the Center for Emergency Situations and Disaster Risk Reduction and approved by the experts of the Working Group of the Regional Forum Meeting of the Heads of Emergency Authorities of Central Asia. It aims at improving the relevant institutional frameworks that facilitate the implementation of bilateral and multilateral agreements, accelerating sustainable development, creation and integration of resilient mechanisms for regional cooperation in prevention, preparedness and response to emergencies of a transboundary nature and improving the system of relationships in risk assessment, disaster monitoring, early warning at the regional level on transboundary disaster hazards.

For a full overview of the documents adopted and decisions made please see here.