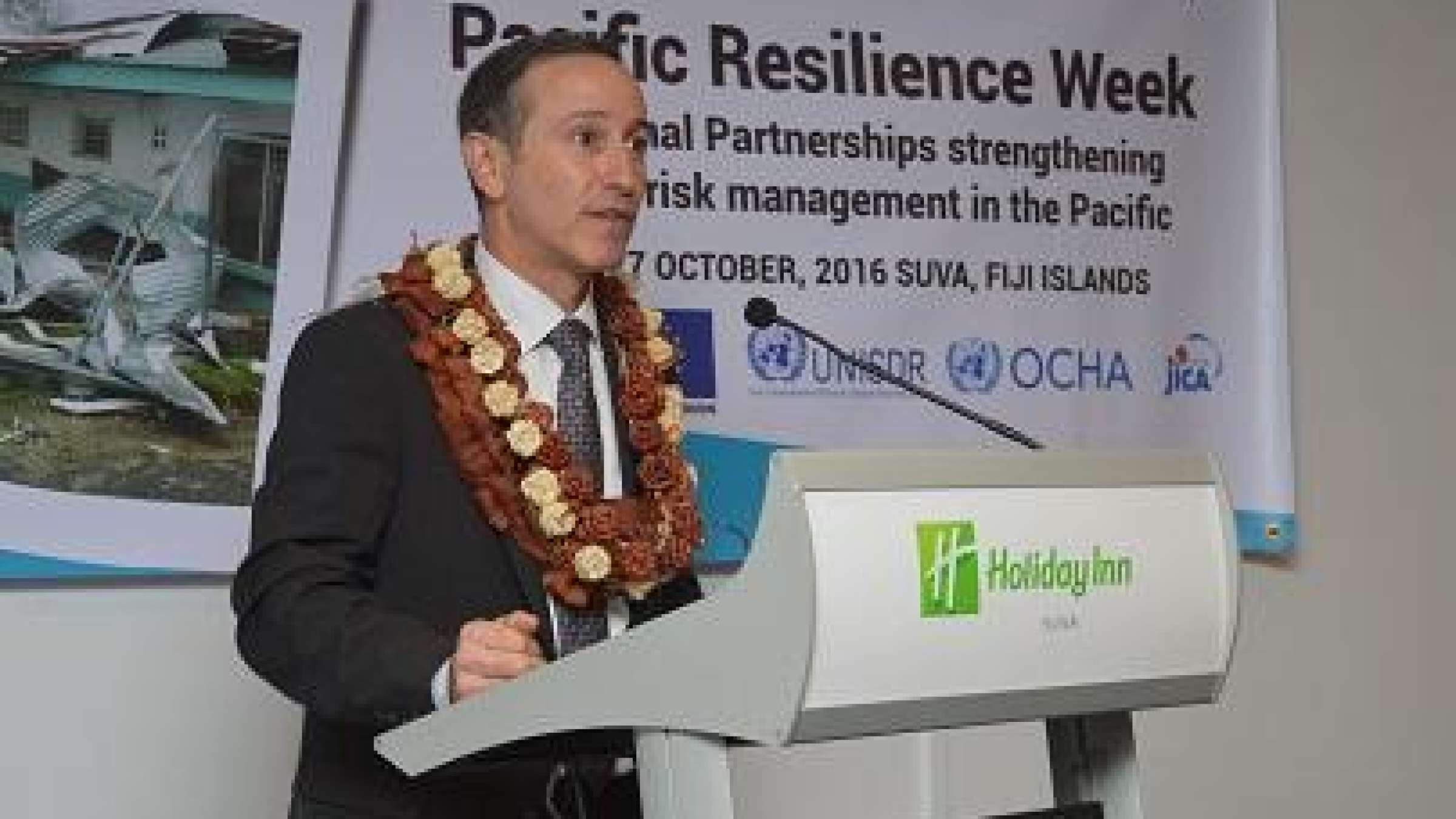 SUVA, 26 October 2016 – Pacific countries have pledged to step up efforts to deal with the challenge posed by climate change and the threat of disasters, in order to ensure that their development is sustainable.

In a joint declaration wrapping up the three-day Pacific Platform for Disaster Risk Management, hosted by Fiji, the 17 countries reaffirmed their commitment to build a stronger and more resilient region in the face of rising climate impacts.

The meeting began on Monday with an address by Mr. Robert Glasser, the Special Representative of the Secretary-General for Disaster Risk Reduction.

“I feel that here in the Pacific I am on the front line of the global struggle against climate change and disaster risk,” he said.

Over the last 20 years, countries in Oceania have been hit by 156 disasters which have claimed over 2,300 lives, affected 4.3 million people and caused combined economic damage of US$58 billion.

Earlier this year, Pacific leaders endorsed a plan for resilient development up to 2030. It echoes the aims of the Sendai Framework for Disaster Risk Reduction, the Sustainable Development Goals and the Paris Agreement on climate change, adopted by the international community in 2015.

Fiji, the Marshall Islands, Nauru, Palau and Tuvalu were among the first 15 countries in the world to ratify the Paris Agreement in April this year.

“The speed with which many small island developing states have embraced the Paris Agreement underlines the important fact that it is countries which contribute least to climate change which are suffering the most,” said Mr. Glasser.

“We must seize every opportunity to ensure that the rest of the world is engaged by your disaster risk reduction agenda and aware of your particular challenges.”

During the meeting, he awarded Fiji’s Ministry of National Disaster Management a UN honour for its response to Cyclone Winston earlier this year.

Winston, which knocked around 20% off Fiji’s GDP, was the most powerful storm ever to hit the Pacific island nation and claimed 44 lives. But the toll compared to hundreds and even thousands of deaths in similar-strength cyclones elsewhere in the past. Fiji was also recognized for its post-Winston appraisal that flagged the need to better disseminate warnings and improve access to shelters for older people and those with disabilities.

In their declaration, the countries recommended that all Pacific Island states and territories improve their understanding of climate and disaster risk – a key step towards reducing it.

Among the measures sought are collection of data and analysis of risk factors such as gender, age, land rights, human mobility and socio-economic status, all of which help to build a better picture of vulnerability and exposure to natural  and man-made hazards.

In addition, they underlined the role of science and technology in building the evidence base for risk reduction, and said it was time to explore the development of a Pacific Science and Technology Advisory Group, with support of the international version already working with UNISDR.

They pointed to the need to document and apply traditional and local knowledge systems – age-old Pacific architecture, for example, has been shown to better withstand the impact of cyclones than non-traditional buildings.

They also recommended that “‘build back better’ and safer principles integrate cultural dimensions and knowledge, including in the areas of non-engineered and heritage architecture, intangible skills and environmental sustainability to bolster the resilience of infrastructure, societies and communities in the Pacific.”

Infrastructure is a focus of the Worldwide Initiative for Safe Schools, launched in 2013. It seeks to boost safety both by providing resilient buildings that are a haven for the community and by ensuring that students and teachers know how to reduce risk. Fiji, Papua New Guinea, Samoa, Tuvalu, and Vanuatu have committed to champion the initiative in the Pacific.

It also called on the Pacific and its partners to further develop multi-hazard early warning systems, and underlined the importance of making agriculture, water and food systems resilient and adaptable to the effects of climate change and disasters.