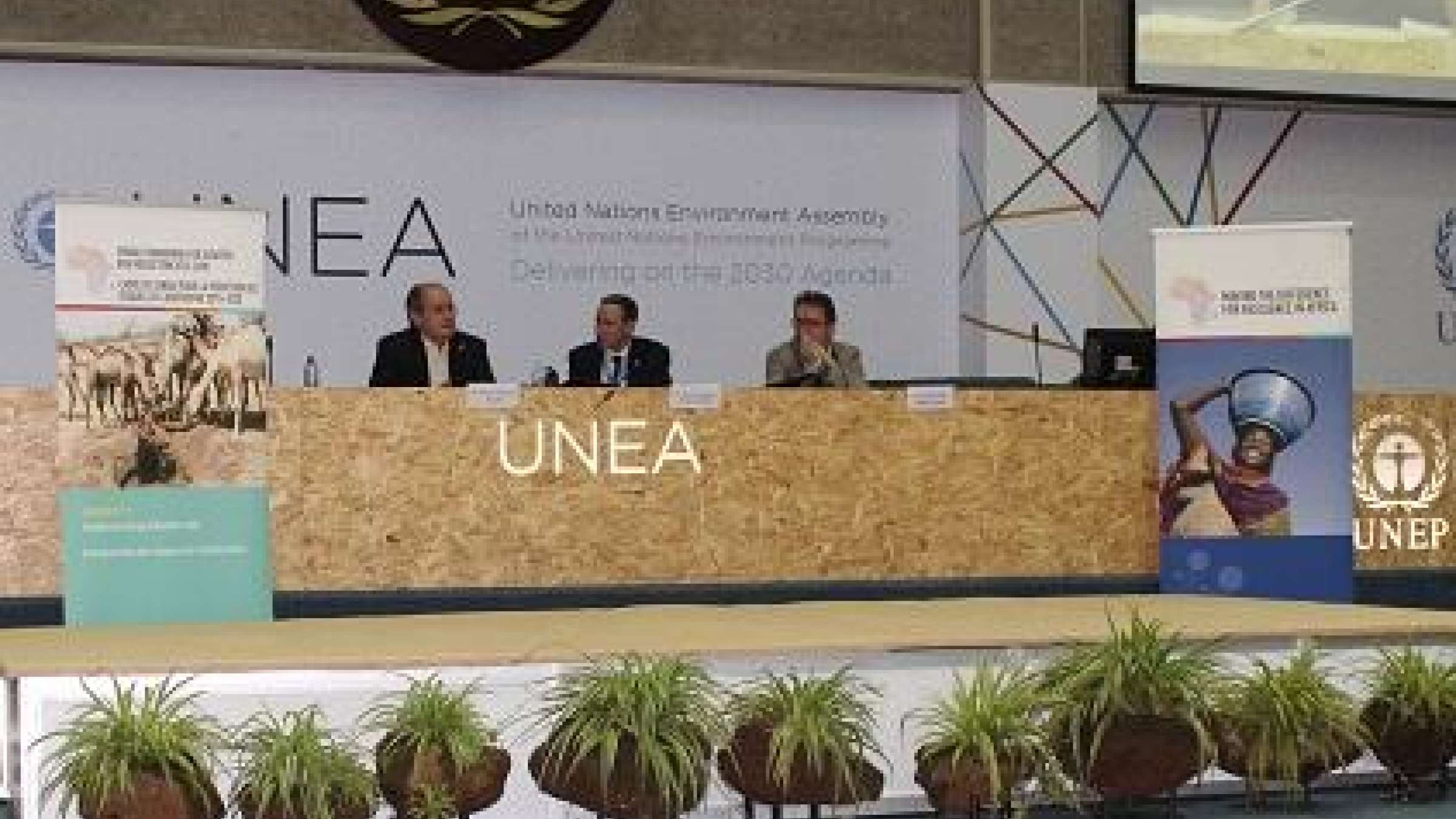 Mr. Robert Glasser, head of UNISDR, (centre) and Mr. Simon Clow of AXA Group (right) listen as Mr. Edmund Barrow of the International Union for Conservation of Nature makes a point during the Nairobi event on ecosystems and disaster risk reduction (Photo: UNISDR)

NAIROBI, 2 June 2016 – Healthy and well-managed ecosystems offer a buffer against hazards and can support local resilience by sustaining livelihoods, making them a cornerstone of efforts to implement the Sendai Framework for Disaster Risk Reduction.

“We need to overcome our nature of trying to forget, and living in the moment after a disaster strikes. Disaster risk can be reduced, or increased, through social, economic and environmental choices,” said UNISDR’s head, Mr. Robert Glasser, Special Representative of the UN Secretary-General for Disaster Risk Reduction.

In India, the government has worked with villagers and the private sector to increase stretches of cyclone-dampening mangrove forests, raising income from fisheries by almost a third in the process. In Niger, 200 million trees have been planted on farmland, helping improve soil quality, increasing yields and thereby creating resilience against climate change for 2.5 million people.

Mr. Glasser moderated a panel on "Healthy Ecosystems, Resilient Planet: Accelerating Implementation of the Sendai Framework for Disaster Risk Reduction and the 2030 Sustainable Development Agenda", on the sidelines of the UN Environment Assembly.

Mr. Glasser observed that the Sendai Framework identifies poor land management, unsustainable use of natural resources and ecosystem degradation as underlying risk drivers that need to be tackled.

He emphasized the importance of integrated and inclusive approaches to reducing disaster risk and collective action by all sectors of society, with civil society and the private sector engaging with governments in environmental planning and management.

PEDRR is a case-study of that approach. A network of partners including governments, the UN and civil society organisations, it works promote and scale up implementation of ecosystem-based disaster risk reduction and ensure it is part of development planning at global, national and local levels.

Data on disaster risk, damage and loss and risk profiling are primary steps outlined in the Sendai Framework to help manage risks. Embedding them in planning is therefore critical.

Panelist Mr. Edmund Barrow, Director of the Global Ecosystem Management Programme at the International Union for Conservation of Nature (IUCN),  said that investing in ecosystems not only reduces risk but also brings benefits. He called on the disaster risk reduction community to make the case for an ecosystem-based approach in order to encourage investment in curbing risk.

“The Sendai Framework is a bridge to bring global emphasis on risk reduction mechanisms down to a national and local level. Rural communities have a huge knowledge base to manage their ecosystem and resources that need to be tapped for sustainable eco-system management,” Mr. Barrow said.

He underlined that only a small fraction of the cost of a disaster is enough to generate resilience, including investment in natural solutions to reduce risks that also provide a cushion for livelihoods. Studies show that every dollar invested into disaster preparedness saves seven dollars in disaster aftermath.

Claims as a result of extreme climate and severe weather events have been on the rise, leading more insurance companies to invest in modelling to explore how ecosystems can be used to reduce risks and to develop better insurance products.

Participants also expressed the need for insurance companies to cover disaster-prone communities that have varying vulnerabilities and hence make different choices, such as people living with HIV and AIDS.