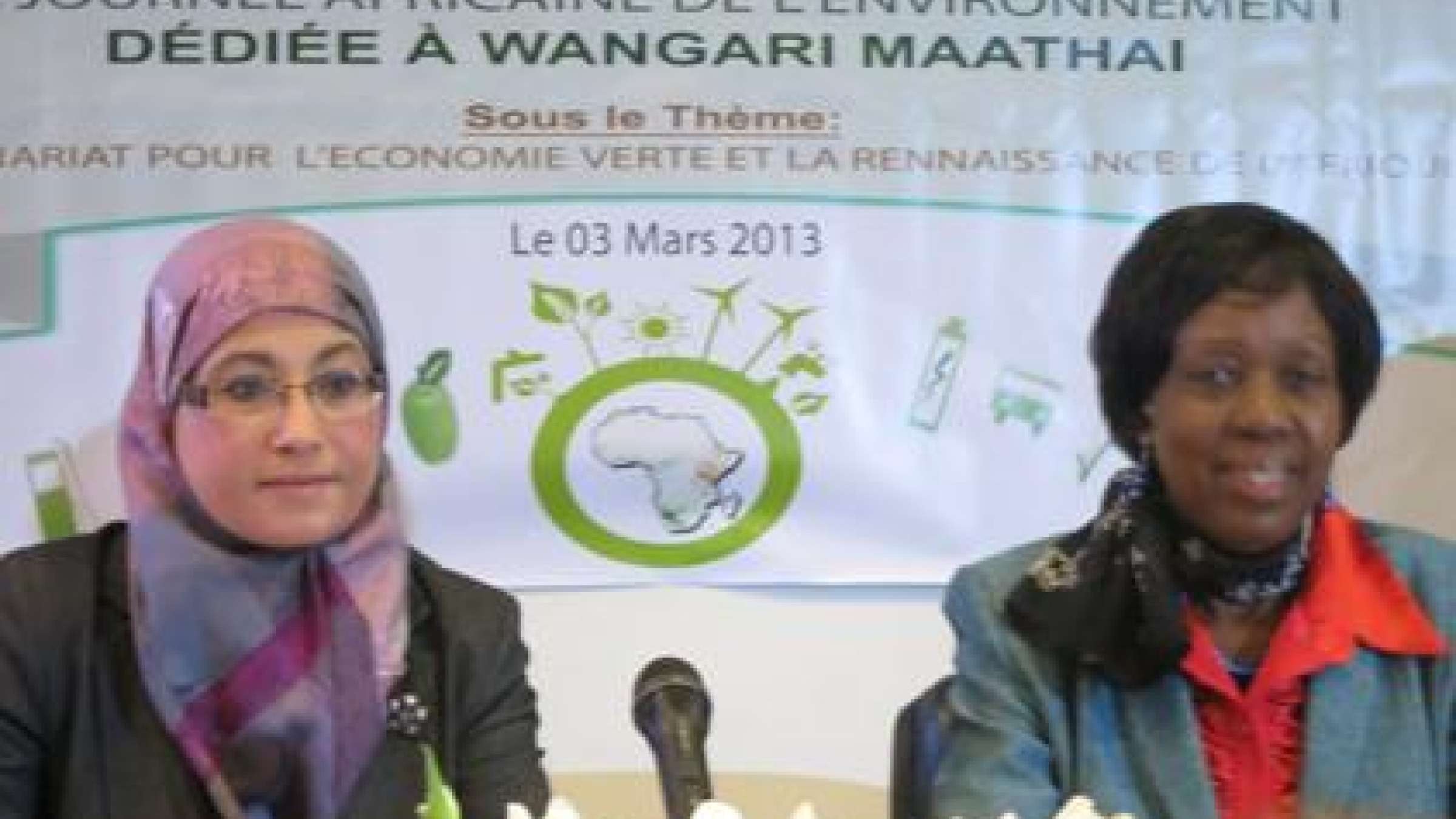 From left: Tunisian Minister for the Environement, Mrs. Mamia El Banna Zayani, and the AU Commissioner, Mrs. Rhoda Peace, at the opening ceremony for the 11th Africa Day for the Environment in Tunis, Tunisia, today.

TUNIS, 4 March 2013 - Africa's infrastructure is under pressure from increasing disasters but the infrastructure deficit is an opportunity for the continent to take a global lead on sustainable development and to leap-frog environmentally unfriendly technologies, said Mrs. Rhoda Peace, the Africa Union Commissioner for rural economy and agriculture, at a seminar marking the 11th African Day for the Environment hosted by the Tunisian government.

"Green growth and the avoidance of unsustainable consumption patterns are integral to Africa's efforts to reduce disaster risk and we would like this reflected adequately in the discussions at the Global Platform for Disaster Risk Reduction in a few months time as well as in the new post-2015 framework agreement on disaster risk reduction when the Hyogo Framework for Action expires," she told UNISDR.

Mamia El Banna Zayani, Minister for the Environment, Tunisia, said her country was honoured to be the first country in North Africa to host the Africa Day for the Environment dedicated to the memory of the Kenyan Nobel Prize Winner and environmental activist, Wangari Maathai.

Mrs. El Banna Zayana said that Tunisia has realised the importance of the green economy as a promising field for employuments and had enshrined this in the new employment strategy at the national level.

She said that Tunisia was looking forward to playing a regional role in promoting the green economy with a strong focus on water, energy and food. "We cannot think of the development of Africa without addressing these."

A statement from the UN Environment Programme recognized Tunisia's potential to accelerate transition to a green economy in view of the fact that it is the second largest producer of organic farming in Africa with over 285,000 ha of organic farms and organic agriculture product exports reached 89 million Tunisian dinars. Tunisia also has a solar programme underway since 2005 and has the goal of reaching 4.3 % of its energy needs from renewable sources by 2014.

Frank Sperling, Chief Climate Change Specialist with the Africa Development Bank, highlighted that strengthening risk management and building resilience is essential for advancing green growth in light of climatic change, increasing natural resource pressures and population growth globally and in Africa itself. "The rationale for green growth is global and regional but we need solutions tailored to national circumstances," he said.

Desta Mebratu, UNEP's Deputy Regional Director for Africa, said that most part of the technological innovation required for the Green Economy transition is already here and where we have a significant lack is in the area of social innovation which will enable us to make the best use of the available technological options.

Mr. Mebratu highlighted the fact that Africa needed to improve its capacity to transform to new technologies and make maximum use of the available opportunities from global financing mechanisms including funds that are made available through the Global Environment Facility.