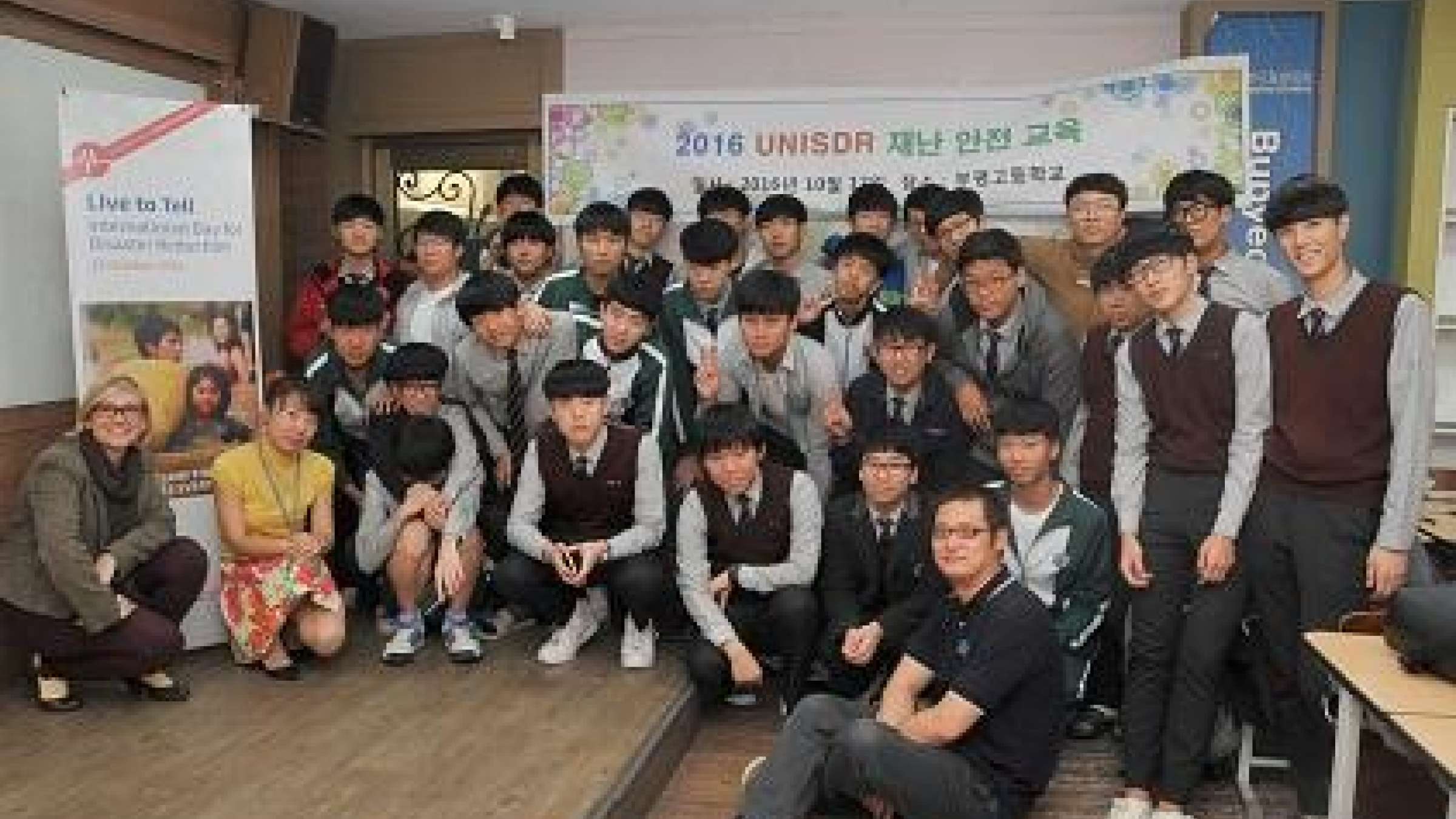 INCHEON, Republic of Korea, 21 October 2016 – Disasters present a whole host of risks for children, from threats to their health, psychosocial well-being, protection and nutrition, to disruption of education, all with potentially long-lasting consequences. According to UNISDR’s flagship Global Assessment Report, at least 66 million youngsters are affected each year by disasters of various scales and types, with a significant impact on their welfare.

However, students of all ages can participate effectively in school and community safety measures and work with teachers and other adults to minimize risk before, during and after disasters. The fact that they are potent agents of change increases the need for them to learn how to keep themselves and their friends and family safe.

The Sendai Framework for Disaster Risk Reduction, a 15-year global blueprint adopted by the international community in 2015, calls on governments to ensure that a whole range of players, including children and youth, are given the space and modalities to contribute to tackling the threats posed by natural and man-made hazards.

The Republic of Korea is fully committed to that, a fact underlined at last year’s Sendai conference, where its Deputy Minister of Public Safety and Security of the Republic of Korea Mr. Lee Sung-ho who said that education was “one of the most effective ways” of etching disaster risk reduction into development planning.

A key dimension of the country’s action is its work within the Worldwide Initiative for Safe Schools, rolled out in 2013.

The city of Incheon, east of the Republic of Korea’s capital Seoul, is home to the UNISDR office in Northeast Asia and Global Education and Training Institute. City authorities and UNISDR have worked hand in hand to design a school-based programme that aims to enable teachers and students to promote school safety and contribute to raising awareness of community members on disaster risk reduction, including natural and man-made hazards, preparedness and disaster risk identification and planning.

As the globe marked International Day for Disaster Reduction last week – the focus being how to curb deaths from natural and man-made hazards, which is the first target of the Sendai Framework – dozens of students took part in a training session at Incheon’s all-boy Bupyeong High School.

“Our school is surrounded by numerous industrial complexes and manufacturing plants, such as General Motors Korea, and some of our students are employed by them after they graduate. It is quite spontaneous that our students, teachers, and the community become aware of and interested in the risk of disasters,” said its principal, Mr. Park Seungnam.

In addition, he noted that some of the students had travelled on the Sewol ferry just a week before it sank in 2014 – some 300 people, mostly high school students, perished in that tragedy. In a further coincidence, Bupyeong High School students had been a military-style camp in 2013, weeks before a handful of participants drowned during swimming practice.

The two-hour training programme, launched in March, has already trained over 600 primary and secondary school students from 10 Incheon schools, and there are plans to reach five more before the end of the year.

“I hope every one of our students becomes aware of the fact that disaster risks are very close to and always around us and, more importantly, that they realize there is a role that they can play to make their family, school, and the community safer,” said Mr. Park.

“I expect them to work out an evacuation plan with their family at home in case of a fire and to become a messenger to inform others of hazards around them and also share what they have learned from this programme."

The programme has already sparked the attention of other cities, including Jeju, capital of the eponymous island province – where the Sewol ferry was headed after leaving Incheon.

Disasters triggered by natural hazards, chiefly tropical storms, have been on the increase in Jeju since 2000 due to a mixture of sea level rises caused by global warming, indiscriminate residential land development, urbanization and a growing population.

Given their risk profile, Jeju teachers and students were keen to adapt the Incheon programme and held a series of training sessions in September for 80 teachers, 30 boys and 30 girls.

Sharing lessons from counterparts elsewhere is a key part of the programme.

A key story used is that of Tilly Smith, who at the age of 10 is credited with saving 100 lives during the Indian Ocean Tsunami of 2004. Thanks to a geography lesson at her school in England, she had learned the tell-tale signs of a looming tsunami and was able to alert fellow holidaymakers on a Thai beach.