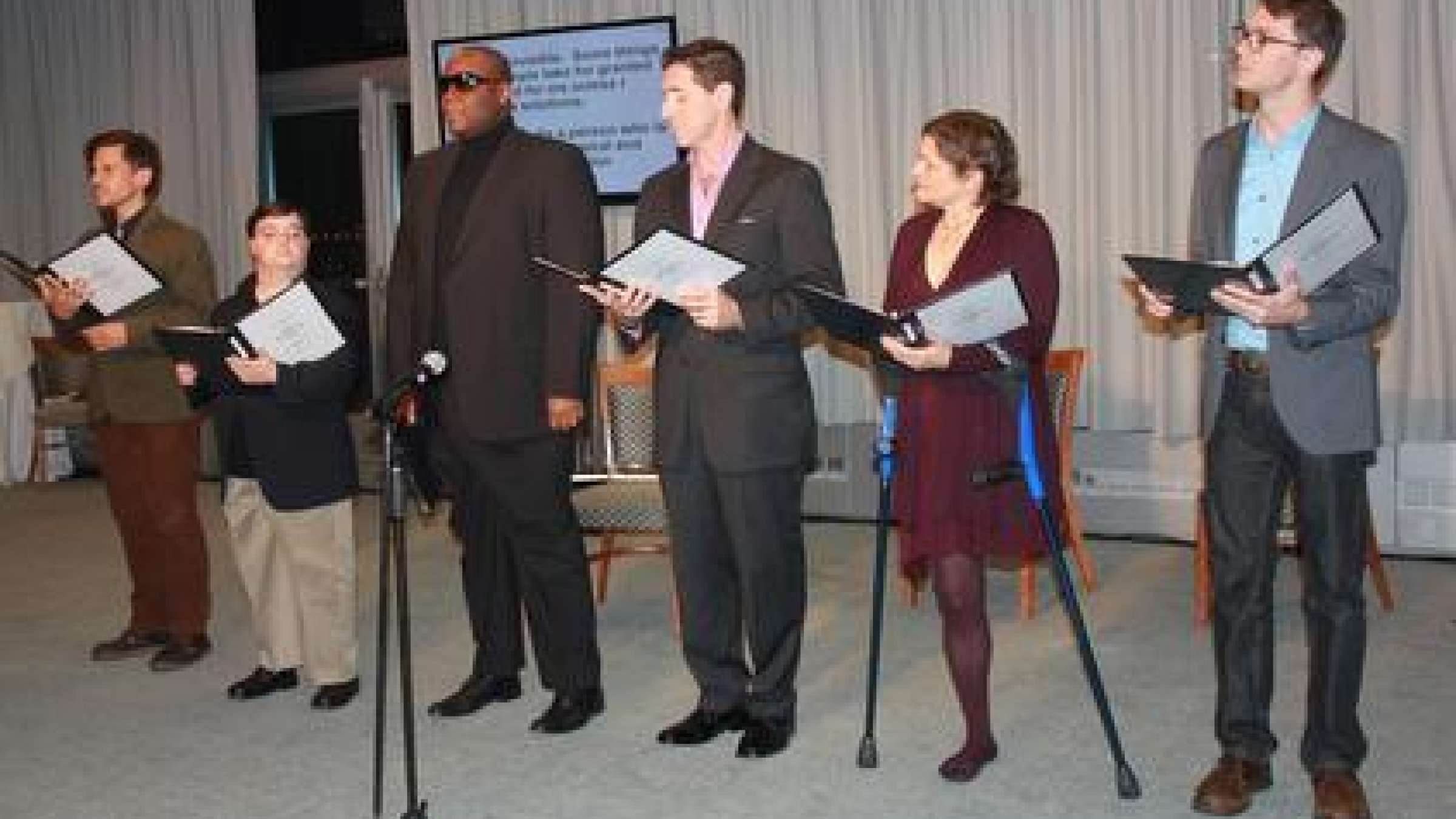 The cast of the off-Broadway Theater Breaking Through Barriers premiered their play 'Ready, Willing and Able' at the UNISDR's New York celebrations for the 2013 International Day for Disatser Reduction.

NEW YORK, 24 October 2013 - The 2013 International Day for Disaster Reduction has seen remarkable efforts by artists and the creative community at large to rally for an inclusive and resilient world.

At the UN Headquarters this month, the off-Broadway Theater Breaking Through Barriers premiered their play 'Ready, Willing and Able' bringing alive on stage nuanced stories of disability in disaster situations, in observance of this year's theme of the International Day for Disaster Reduction: Inclusion saves lives.

Theater Breaking Through Barriers which describes itself as a 'fully integrated theatre company' and works with actors, directors and artists with and without disabilities, has strived for more than thirty years to change perceptions of disability through theatre.

This year, they have dedicated their creative talents to advocate for inclusive disaster risk reduction.

"The ability of this play to show the immense promise of inclusion in the life of on individual sends a very powerful message," said the Special Representative of the UN Secretary-General for Disaster Risk Reduction, Margareta Wahlström.

Nicholas Viselli, the director of Ready, Willing and Able, explained the impetus behind the production. "Eighty percent of us will deal with disability at some point in our lives, yet persons with disabilities are hardly ever perceived as resourceful. We feel that theatre is a great way for communities to confront the attitudes they need to change. The International Day for Disaster Reduction offered us an opportunity to ask of ourselves and in effect our audience: how are persons with disabilities perceived during times of disaster? And how can we show that they they are a key resource in discovering practical solutions for resilience?"

The play invoked both humour and emotion in powerful ways to convey its message. For part of the performance, the audience was transported to a game show called 'This is Your Life' where the quizmaster, Mr Hyogo, challenged participants with questions on disaster preparedness. The witty participants -- all characters with visible and invisible disabilities -- responded showing their knowledge and talents as planners.

Some scenes brought to light the harsh reality, too, that often, persons with disabilities are planned "for" rather than "with".

Indonesian pantomime artists Arief Wicaksono and Stephanie Rahardja also performed their interactive act called "No one left behind" in New York in observance of the International Day for Disaster Reduction. They mimed the dos and don'ts of earthquake safety and quizzed the audience afterwards.

A product of the Deaf Art Community based in Indonesia, the pantomime demonstrated how creative non-verbal communication can make life-saving information accessible to the whole community including deaf persons.

Amina Mohammed, Special Advisor to the Secretary-General on post-2015 development planning remarked, "These artistic initiatives demonstrate that even if a person may have a disability, they have many more abilities. Let us remember that and recognize that the post-2015 development agenda presents all of us with an opportunity to create a world that is both resilient and inclusive."

No one left behind