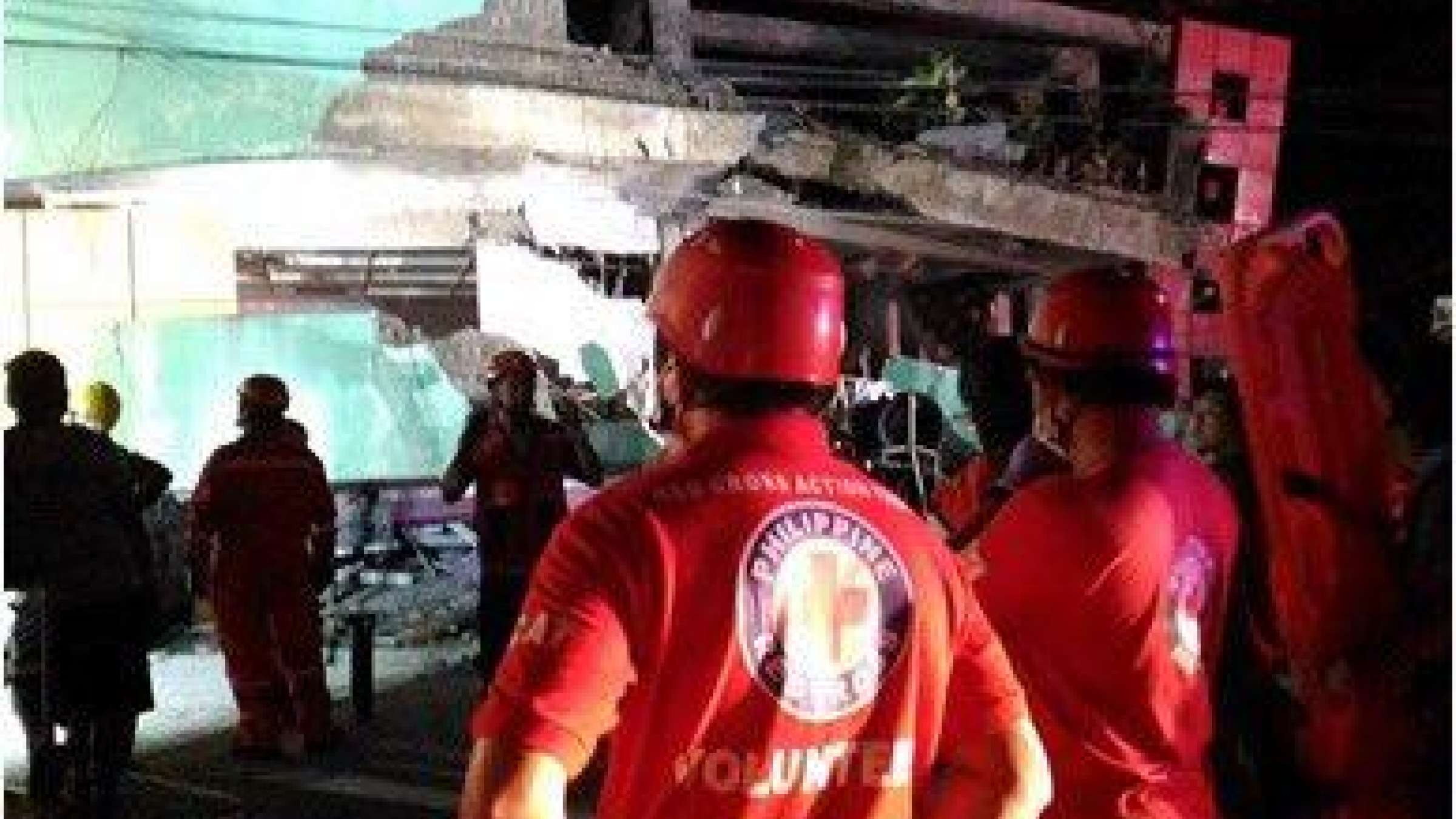 Rescue workers outside a building that was damaged in the recent Leyte earthquake (Photo: Philippines Red Cross)

GENEVA, 11 July – International disaster prevention advocate Senator Loren Legarda has called for a strengthening of the resilience of critical infrastructure, in the wake of a magnitude 6.5 earthquake that hit Leyte in her homeland the Philippines last week.

The earthquake, which caused at least four deaths and injured 100 people,also damaged a power plant, caused landslides and cracked buildings and roads. It has been followed by more than 241 aftershocks over recent days.

Senator Legarda, UNISDR’s global champion for resilience and chair of the Philippines Senate Committee on Finance, said that while it is good that the government is undertaking earthquake preparedness measures through safety drills that familiarize citizens with what to do before, during and after earthquakes, ensuring the structural integrity of buildings, bridges, roads and other infrastructure is vital and must be prioritized.

“Earthquakes do not kill people; unsafe structures do. Earthquakes turn into major disasters because of poorly built buildings in inappropriate places, inadequate design and materials specification, and shortcuts in construction. Thus, inspection during the construction of both public and private infrastructure is important. We must realize that the additional expense required for making structures safe from earthquakes is worth it especially if it would save thousands of precious lives,” she stressed.

Reducing disaster damage to critical infrastructure is one of the seven targets of the Sendai Framework for Disaster Risk Reduction, an international agreement adopted in 2015 at a UN conference in Japan. The Sendai Framework seeks through to 2030 to prevent the creation of new disaster risk and to curb existing risks around the world.

“There should be evaluation of the structural integrity of our buildings and civil infrastructure, including roads, bridges, airports, train stations and concrete measures for the retrofitting of critical infrastructure to withstand earthquakes,” Senator Legarda said, proposing provisions in the Philippines budget that would strengthen the country’s resilience to natural hazards.

One special provision she introduced mandates that critical public infrastructure must be designed and built to be resilient to strong earthquakes, typhoons, flood and other extreme weather events.

The Philippines sits on the “Pacific Ring of Fire” where earthquakes and volcanoes are common. A magnitude 7.7 earthquake killed nearly 2,000 people in the northern Philippines in 1990.

Senator Legarda was recognized UNISDR as its Global Champion for Resilience at the end of 2015, during the COP21 UN conference that crafted the Paris Agreement on climate change.

She was honored for her unrelenting and vigorous support in advancing disaster risk reduction and climate change adaptation, nationally and internationally, through legislation, policy leadership, and advocacy at all levels.

Senator Legarda is often acknowledged as the Philippines’ foremost environmental legislator. She was the principal author and sponsor of the Climate Change Act of 2009, and has been chiefly responsible for the enactment of many other Philippine laws on environmental governance like the Clean Air Act, Ecological Solid Waste Management Act, Renewable Energy Act, Environmental Awareness and Education Act, People’s Survival Fund Law, and the Disaster Risk Reduction and Management Act.

As incumbent chair of the Senate Committee on Finance, she encouraged and ensured the mainstreaming of disaster risk reduction and climate change adaptation in the annual budgets of government agencies, an approach she has been advocating for since 2010.