World Conference to include lessons from Fukushima 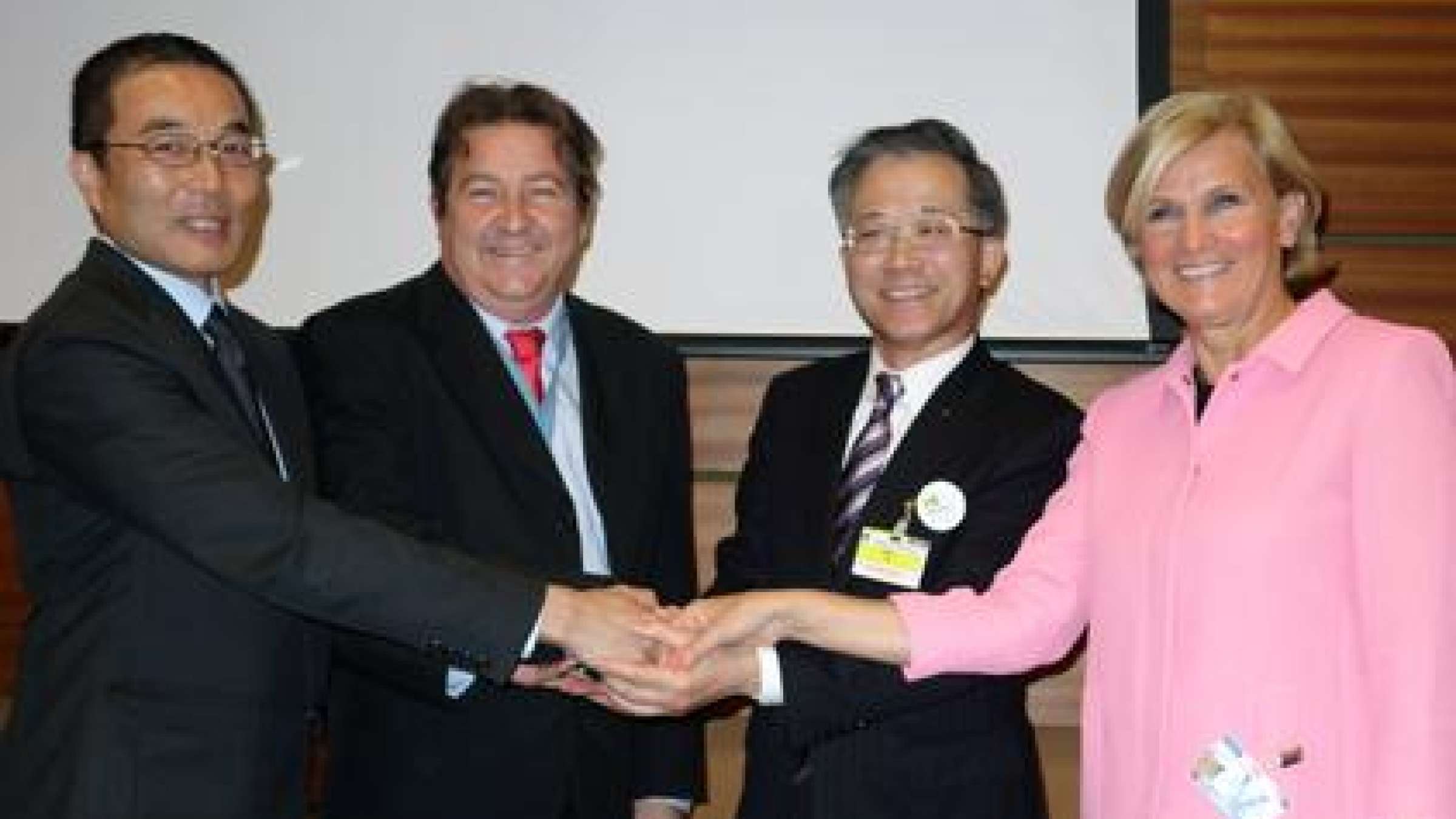 GENEVA, 5 September 2014 - Rice and sake from Fukushima are part of a charm offensive currently underway by the office of the Governor of Fukushima as Japan prepares to host the Third UN World Conference on Disaster Risk Reduction in March, 2015.

Following a seminar on Fukushima’s reconstruction and recovery, in Geneva this week, the Vice- Governor of Fukushima, Fumio Murata, dismissed “unfounded rumours” about the quality of food grown in the prefecture and invited diplomats to sample a lunch which came with these staples produced at the epicenter of the Great East Japan Earthquake and Tsunami which struck on March 11, 2011.

All agreed the sushi was delicious and that there is no reason to doubt Fukushima’s claim to produce the best sake in the world.

Fukushima’s decontamination programme has been so successful that 40,000 of the 160,000 people forced to evacuate because of the nuclear power disaster, have now returned.

Out of 11 million inspections of bags of rice conducted in the early part of this year, only 28 were found to exceed the standard value of 100 Bq/kg which is a considerably more stringent test for radioactivity in food substances than applied in many other rice producing countries.

Vice-Governor Murata said humankind has never before experienced this type of disaster, a disaster where the natural catastrophes of an earthquake and tsunami were followed by a nuclear power accident which in turn has caused significant damage to the reputation of the affected areas resulting in hardship for many people.

His own personal reflection on the disaster was that contingency plans were in place for earthquake, tsunami and nuclear disaster but “a multiple disaster was not in our plan. A tsunami of 15 metres was beyond our imagination and that knocked out the power systems which caused the accident.”

Neil McFarlane, UNISDR Head of Regional Programmes and DRR Coordination, said the lessons learned from the affected prefectures of Fukushima, Iwate and Miyagi would be integrated into the programme of the World Conference. The Great East Japan Earthquake had been a game-changer for disaster risk reduction shifting the emphasis to a multi-hazard approach and to identify technological threats which can be triggered by natural hazards.

“The intensity and full extent of hazards in the future need to be factored into your risk assessments,” he said while urging Conference participants to take full advantage of the opportunity to observe at first hand the tremendous progress being made in reconstruction and recovery in Fukushima. “You can learn so much on those guided tours which will be offered by the hosts,” he said.

He stressed also how Japan had used the Fukushima experience to build up networks engaging with youth, women and girls, the disabled and the elderly in line with the focus of the International Days for Disaster Risk Reduction since 2011.

Ambassador Takashi Okada cited a report earlier this year from the United Nations Scientific Committee on the Effects of Atomic Radiation (UNSCEAR) which found that “No discernible changes in future cancer rates and hereditary diseases are expected due to exposure to radiation as a result of the Fukushima nuclear accident.”

Vice-Governor Murata said that the World Conference was also an opportunity for the people of Fukushima to give something back to the world for all the kindness and support they had received in the wake the disaster.

The Third UN World Conference on Disaster Risk Reduction takes place from March 14-18, 2015 in Sendai, Japan. A key expected outcome is the adoption of a revised version of the Hyogo Framework for Action, the framework agreement for disaster risk reduction adopted by the UN General Assembly in 2005.

Further details on the Conference can be found here http://www.wcdrr.org.