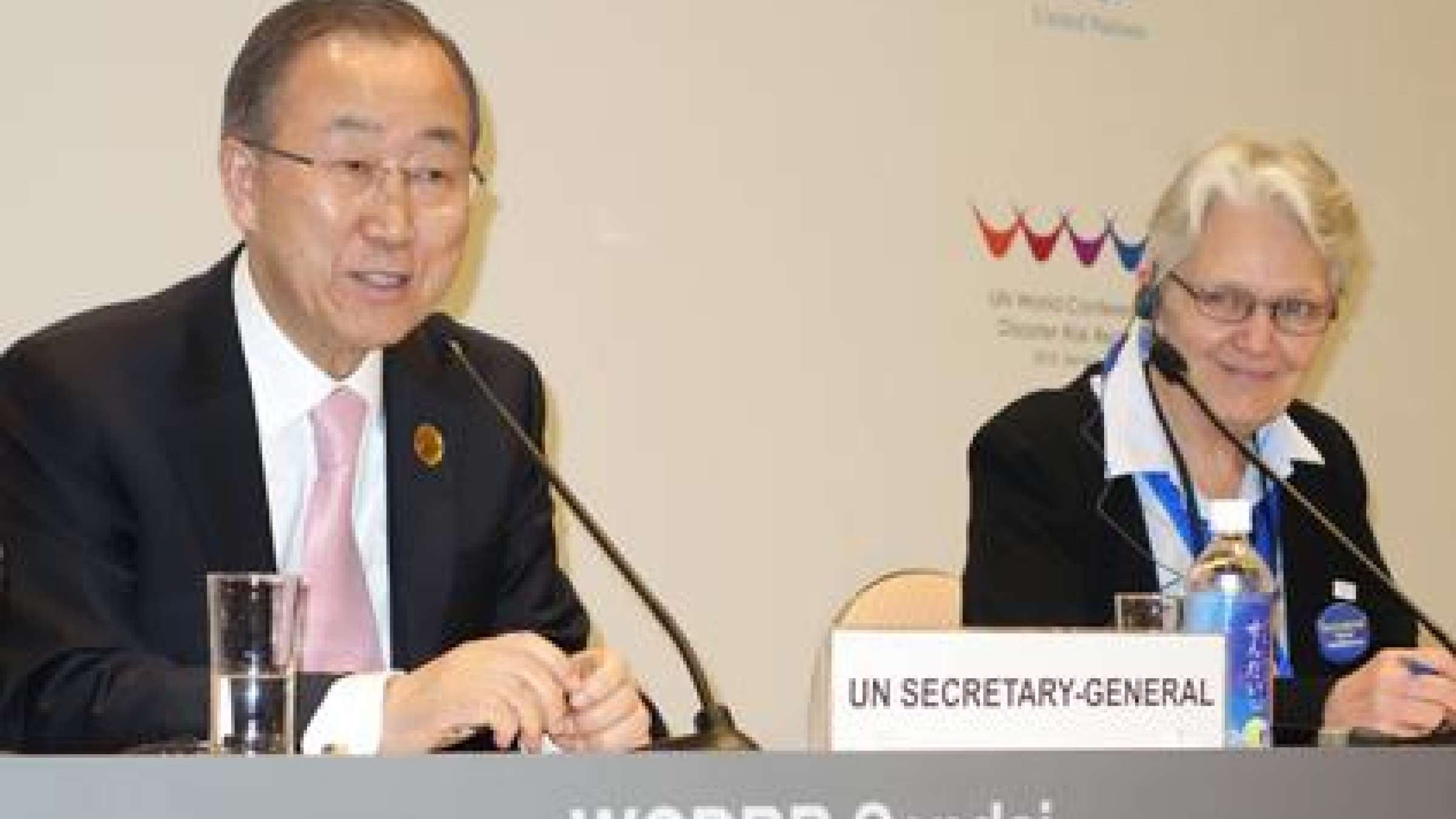 Speaking at a press conference, the UN Secretary-General, Ban Ki-moon, said: “Our thoughts are with all disaster victims. Our best possible tribute will be to make this Conference a success.” (Photo: UNISDR)

SENDAI, 14 March 2015 - The opening day of the Third UN World Conference on Disaster Risk Reduction was marked today by a stark reminder that disaster risk management is a matter of life and death.

The President of Vanuatu, Baldwin Lonsdale, was visibly moved as he told the gathering that “I am speaking with you today with a heart that is so heavy. I do not really know what impact Cyclone Pam has left on Vanuatu, as there are no confirmed reports as yet. All I can say is that our hope for prospering into the future has been shattered.”

Overnight, many small islands in the south Pacific felt the brunt of the Category 5 cyclone and the first deaths were confirmed. The UN Secretary-General, Ban Ki-moon, met with President Lonsdale before he went on to open the Conference which was attended by 4,000 participants and representatives of 186 member UN states.

He reminded conference participants that annual economic losses now exceed US$ 300 billion annually. “We can watch that number grow as more people suffer. Or we can dramatically lower that figure and invest the savings in development. Six billion dollars allocated each year can result in savings of up to US$360 billion by 2030,” he said, citing the latest evidence in the Global Assessment Report on Disaster Risk Reduction published by UNISDR

He praised the existing global agreement on disaster risk reduction, the Hyogo Framework for Action (HFA), which was adopted ten years ago in Kobe, Japan. He said it “has saved thousands of lives. Now we must respond to the world’s growing needs by empowering individuals, supporting communities and backing promises with resources.”

Work is continuing at the Conference to agree on a new framework for disaster risk reduction which will update the HFA. The Conference President, Ms. Eriko Yamatani, Japan’s Minister for Disaster Management, announced the appointment of a Main Committee which will work with government representatives and report back on a final text to be adopted by the Conference.

Japan’s critical role in advancing the cause of disaster risk reduction was underlined by a major announcement from Prime Minister, Mr. Shinzo Abe who pledged $US 4 billion to support implementation of the “Sendai Cooperation Initiative for Disaster Risk Reduction” over the next four years.

The package will focus on the development of disaster-proof infrastructure, the promotion of global and regional cooperation and the training of 40,000 government officials and local leaders to play a leading role in national efforts for disaster risk reduction. Japan will make its expertise and knowledge available.

Speaking again at a High-Level Panel on Moblizing Women’s Leadership, he said : “One of the major projects that will be undertaken through this initiative is the launch of the Training to Promote Leadership by Women in Disaster Risk Reduction. Furthermore, at the World Assembly for Women in Tokyo to be held this summer, one of the themes will be ‘Women and Disaster Risk Reduction’.”

WFP Executive Director Ms. Ertharin Cousin underscored that the “global reset” beginning today in Sendai ¬must include steps to place women at the centre of disaster risk reduction efforts. Without those steps, none of the proposed ambitious goals would be met.

Mayor of Sendai, Ms Emiko Okuyama , recounted the experience of the Great East Japan earthquake in 2011. “We realized that the people making decision for disaster preparations on day-to-day basis are mostly men. It reminded us that women need to be part of every decision-making forum with regards to disaster risk reduction and be active leaders in the area,” she said.

The French Foreign Minister, Laurent Fabius, made an appeal at the Conference opening for the creation of a worldwide early warning system for Climate Disasters - “Climate Disaster Warning” - as he stated that 70% of disasters are now linked to climate change, double the number of twenty years ago.

He said the objective was to provide the most vulnerable countries, including small island developing states, with access to real-time weather and climate updates, information and communications technology and to support a SMS-based alert system.

Mr. Fabius is incoming President of COP21, the 21st session of the Conference of the Parties on Climate Change which will take place December in Paris. He said that disaster risk reduction and the struggle against climate change are totally linked. He said: “It is necessary to tackle these problems together and not separately.”

The Conference attended by 186 governments will adopt a new post-2015 framework for disaster risk reduction on March 18 in place of the current Hyogo Framework for Action adopted ten years ago at the last World Conference on Disaster Risk Reduction held in Kobe, Japan. For more details visit www.wcdrr.org