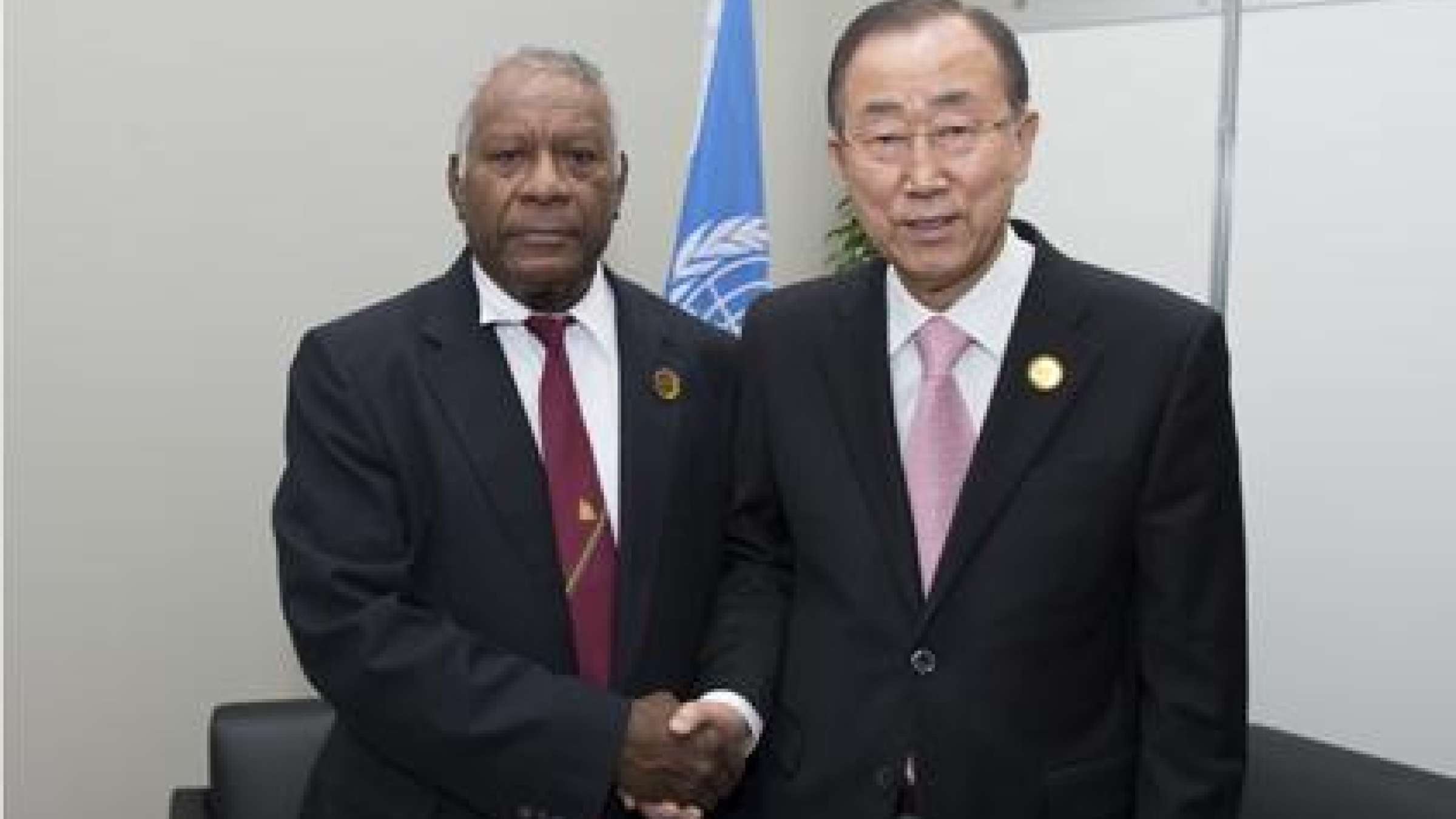 The President of the Republic of Vanuatu, H.E. Baldwin Lonsdale (left), with the UN Secretary-General Bank Ki-moon (right). (Photo: UNISDR)

15 March 2015, SENDAI – The President of the Republic of Vanuatu, H.E. Baldwin Lonsdale, today appealed from the Third UN World Conference on Disaster Risk Reduction in Sendai, Japan, for international support in anticipation of large-scale needs for his island nation following a direct hit from Category 5 Cyclone Pam over the weekend.

President Lonsdale said: "Vanuatu is used to disasters but the indications are that Cyclone Pam has caused unprecedented damages. At least two deaths have been confirmed and over 30 injured people are being treated in the Central Hospital in the capital, Port Vila where many people are now homeless and torrential rain has led to severe flooding. Bridges which link Port Vila with the rest of the island have been destroyed.

"The National Disaster Management Office is coordinating an aerial survey today of the affected areas and we will then have a better idea of what has happened in the outlying islands. We are particularly concerned about the province of Tafea. However, I can say from past experience that there will be severe damage to schools, health facilities, roads and public utilities. There will also be significant humanitarian needs as large numbers of people have lost their homes in the capital Port Vila.

"This is a major calamity for our country. Every year we lose 6% of our GDP to disasters. This cyclone is a huge setback for the country's development. It will have severe impacts for all sectors of economic activity including tourism, agriculture and manufacturing. The country is already threatened by coastal erosion and rising sea levels in addition to five active volcanos and earthquakes. This is why I am attending this Conference and why Vanuatu wants to see a strong new framework on disaster risk reduction which will support us in tackling the drivers of disaster risk such as climate change."

The Third UN World Conference on Disaster Risk Reduction opened yesterday and will conclude with the adoption on March 18 of a new agreement on disaster risk reduction which will provide guidance on how to reduce mortality and economic losses from disasters.