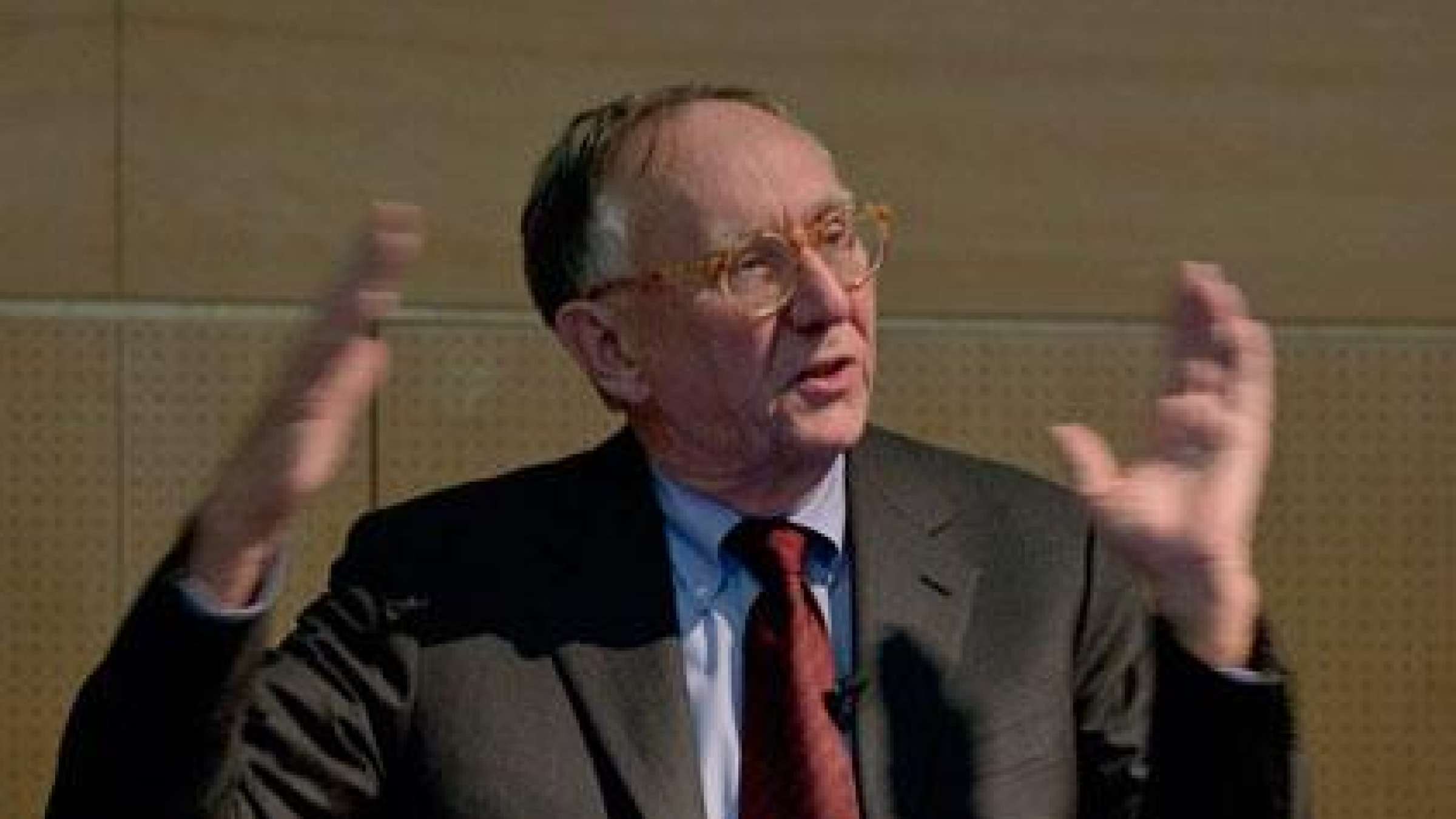 Jack Dangermond, founder and President of Esri, speaks about the future of GIS in the work of the international community at the WMO-hosted GIS conference in April. (U.S. Mission photo by Eric Bridiers)

GENEVA, 24 April 2012 - Innovations in technology have made it easier in the last decade to reduce disaster risks and plan for the future. The internet combined with technologies, such as Geographic Information Systems (GIS), now makes it possible to better understand and communicate the social and physical complexities of disasters.

"Technology is a valuable tool that has the potential to transform the way we work, and it also can deliver cost efficiencies, increase transparency, and make an organization more relevant to what is happening around the world in real time," said Ambassador King in her keynote address.

"Today, the world faces many challenges: climate change, famine and drought, global epidemics, violent conflict and persistent poverty. Technology such as GIS offers the possibility of visual analysis and allows us to see political boundaries, population trends, and socioeconomic differences. It also offers us the ability to acquire and verify facts."

She also pointed out that by "using GIS technology we can analyze and see where natural disasters have previously occurred and how they have impacted the landscape. We can also try to predict where a natural disaster is most likely to occur." By understanding where disasters happen, the international community can develop new and more efficient methods to reduce future disaster risks.

The conference also highlights that as development and humanitarian actors increasingly rely on technology to make informed decisions, the proliferation of information should also be in harmony with what these actors want to achieve through better coordination.

"Consider not only the power of technology in helping us to achieve greater interconnectivity and true partnership. But also remember that it is up to us to use it better. Technology does not have a mind of its own. It has to be directed and put to its most effective use, or it can be a waste of resources, or worse yet applied to nefarious purposes", emphasized Ambassador King. "Collaboration between partners is critical for the success of such efforts."

Jack Dangermond, founder and President of the GIS technology company Esri and a speaker at the 2011 Global Platform for Disaster Risk Reduction, said that "geo-spatial systems are helping us understand our world" by turning information into action.

"It also encourages greater participation at every level in an organization to find solutions to global problems," said Dangermond, referring to the conference as an opportunity to build communities.

"I welcome this initiative by the private sector and the international community. The value is not only in the technology itself, but the ability for it to connect people in working together. It's an exciting time and technology holds great promise," says Margareta Wahlstrom, UNISDR's Chief and the Special Representative of the Secretary-General for Disaster Risk Reduction, on the conference.

"Technologies, like GIS, are important tools for understanding and supporting disaster resilient communities. Whether you're a city planner, development practitioner humanitarian responder, or crisis-mapper, information for decision-making is now at our fingertips to reduce risks and build disaster resilience."

"Society now has the capability to generate massive amounts of information. We need to be able to synthesize and analyze this information and turn it into targeted policies and actions."

The two-day 'GIS for the United Nations and the International Community' conference was attended by more than 200 representatives from over 100 entities from the United Nations, academic fields, nongovernmental organizations, and the private sector. Organized by Esri and UNOSAT, the conference was the first gathering of its kind and took place from 3-4 April at the World Meteorological Organization headquarters in Geneva. The aim of the conference was to understand how Geographic Information Systems (GIS) and spatial analysis is being used by the international community. Sessions topics included "Planning, Preparedness, and Prevention", "Response and Recovery", and "Transition to Development Planning".