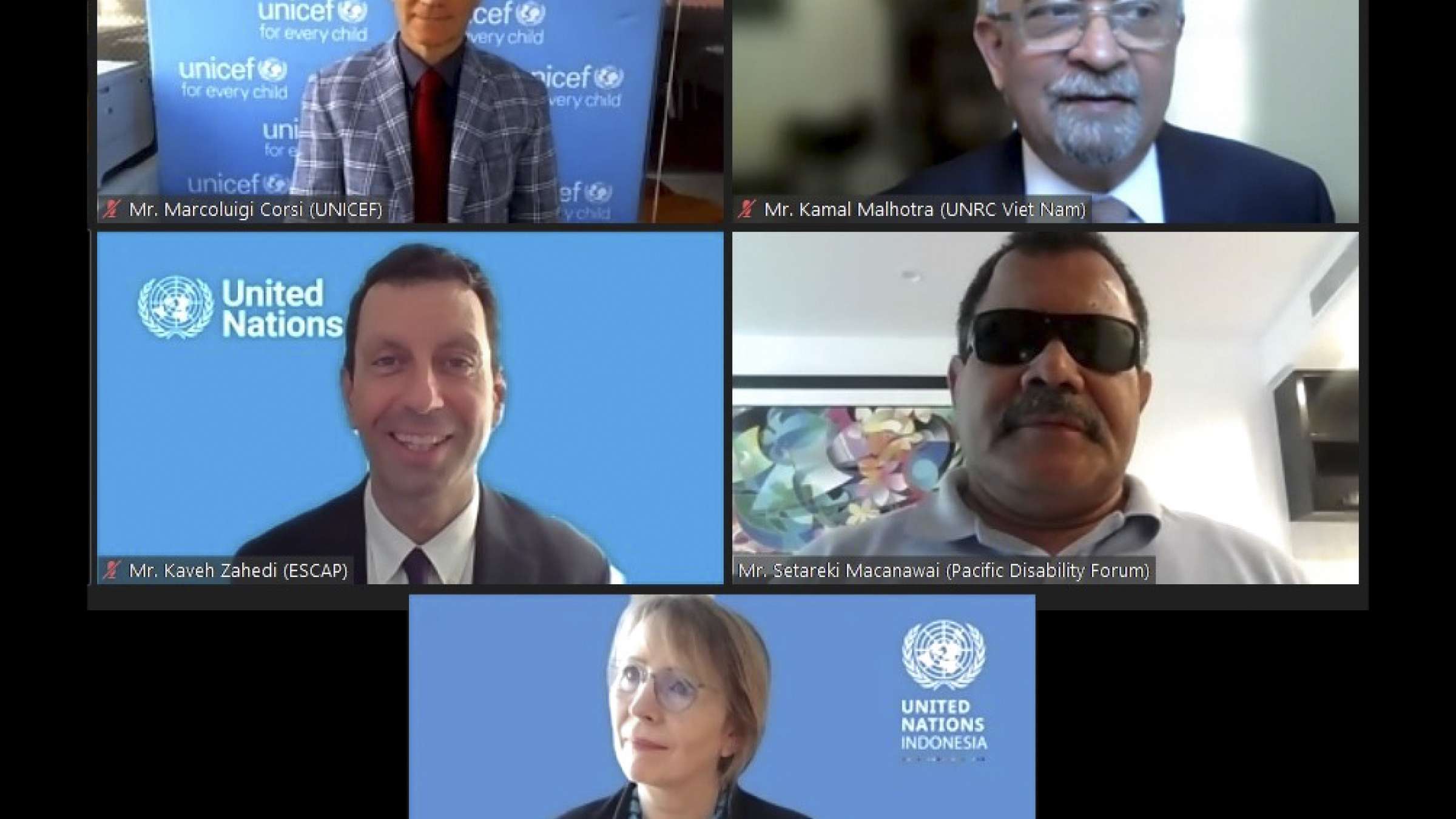 2020 was an unprecedented year for the Asia-Pacific region with the COVID-19 pandemic compounded by a succession of climate-related disasters, threatening to derail decades of hard-earned socio-economic progress. Many countries in the region now face significant challenges in delivering on the 2030 Agenda for Sustainable Development and meeting its 17 SDGs.

Despite the pandemic, implementation of the reform of the United Nations development system at the regional level has been gathering pace in line with the Secretary General’s reform agenda, catalysed by the “Decade of Action.”

On 26 March, high-level representatives from UN entities and civil society gathered for a side-event at the Asia-Pacific Forum on Sustainable Development, to discuss the regional challenges and responses needed to support sustainable recovery from the COVID-19 pandemic. An interagency initiative led by several members of the UN Regional Collaborative Platform, in particular the UN Development Coordination Office, UNESCAP and UNFPA, and hosted on a UNDRR platform, the event was an opportunity to review and reflect upon the progress made through the UN reform at the regional level in addressing development challenges in the region.

Mr Kaveh Zahedi, Deputy Executive Secretary of UNESCAP moderating the discussion said, ‘We are already seeing some very positive changes. The UN system in the region has rallied together to make its assets more accessible to member states, country teams, civil society and other partners.’

Central to the reform process has been the creation of the Regional Collaborative Platform in 2020. Member States were involved in identifying five Issue-based Coalitions (IBCs) which are now enabling a more coordinated and focused action by the UN at a regional level on key priority areas and cross-cutting challenges, namely; Climate change mitigation; Building resilience; Inclusion and empowerment; Human mobility and urbanization; and Human rights, gender equality and women’s empowerment.

‘The IBCs have been central to our ability to act fast in a coordinated way’, said Mr. Zahedi. ‘Within the first six months of operation there have been some early footprints, from mainstreaming gender equality and human rights into COVID-19 response plans, to providing more coherent policy advice on cross border and common challenges, such as disaster risk reduction and social protection.’

Other examples include the Asia-Pacific Knowledge Management Hub which was launched as a one-stop-shop to access regional knowledge and expertise, and the Asia-Pacific SDG Gateway and associated Progress Report which is improving the way progress is tracked and further priorities identified.

At the heart of reform process are issues of efficiency, accountability and transparency. Ms Valerie Julliand, UN Resident Coordinator in Indonesia explained how the reform had succeeded in joining the layers of the UN system at country, regional and global levels.

‘COVID-19 has revealed weaknesses in policies and systems of governance.  If we don’t work in a system of solidarity we can’t win the fight against the virus’, said Ms. Julliand, who cited an example from her previous posting in Nepal, where five UN agencies worked together at country and regional levels to counter misinformation and improve public awareness around COVID-19.

‘Within two weeks, 33 consultations engaging 1,300 people had been organised throughout the country. They were groups vulnerable to COVID-19 who were traditionally left behind, such as garbage collectors, returning migrants, sex workers and people with disabilities. We moved in record time and it was made possible because all agencies mobilised towards a common goal.’

In Indonesia the IBC on human rights, gender equality and women’s empowerment has helped the UN to put words into practice. The first e-training of its kind in the region was recently conducted for the UN country team on the practical application of the gender equality marker.

‘The regional structure and regional reform has brought a wealth of entities, services, and a spirit and dynamism that has definitely enriched and supported what we do at a country level’, explained Ms. Julliand, adding, ‘IBC topics must come out of consultations between regional and country offices. This guarantees their relevance and ensures ownership and participation’.

Mr Kamal Malhotra, UN Resident Coordinator of Viet Nam, while highlighting the progress made and the importance of the UN regional assets to support country-level action, noted that more needed to be done to contextualise and tailor regional analyses to country-level needs and priorities. Pointing to data and statistics as a key integrator of work across entities operating at national, regional and global levels, he said: ‘Good coordination between the UN system at the country, regional and headquarters level, has resulted in providing coherent one-UN advice and inputs to the ongoing national statistical strategy in Viet Nam. We need to further strengthen our support to the National Statistics Office in the development of statistics services and harmonized data collection programmes.’

Mr Marcoluigi Corsi, Deputy Regional Director with UNICEF for East Asia and Pacific said that UN reform had helped to flatten the traditionally vertical boundaries between people and agencies working at regional and country levels of the UN system, with agencies working better across mandates and increasingly including voices of other stakeholders outside the UN.

‘The reforms are creating space for a new business model for the UN to operate in. To move forwards, we need to unlearn certain behaviours. This is a plea for the new generation. Some of us came to the UN system 20 years ago, we learnt a certain way, now we need to unlearn’.

Mr. Corsi also highlighted the opportunities for the UN to maximise its role as a knowledge broker. ‘On human rights we have an opportunity to increase the UN role around normative work, particularly in a region where the civic space has been shrinking. The IBCs shouldn’t be an add-on to the work of each agency but become part of each agencies’ DNA’.

Mr. Setareki Macanawai, CEO of the Pacific Disability Forum (PDF), provided some important civil society perspectives on the reform process. He raised concerns about inclusivity, stressing that the preconditions for engaging persons with disabilities in the SDG development process still had not been fully met, with issues remaining around accessibility to meetings, social protection and the provision of assistance devices. He said: ‘Leaving no one behind has become a ‘buzzword’ and sometimes we lose track of its real meaning for those who are left behind the farthest – and the persons with disabilities are right there.’

But Mr. Macanawai also highlighted the benefits of the increased collaboration and coordination taking place between UN agencies in the Pacific.

‘When UN agencies do talk to each other, they share lessons learned and good practices with each other. Critical to our region is the work being done on disaster risk reduction. Collaboration with UNDRR, OCHA, UNDP and UN Women has helped greatly in the cross-pollination of inclusion approaches.’

The session concluded with a call for harmonizing the UN regional assets to better support national implementation. This should be complemented by continuing to strengthen regional capacities and providing windows to the global and regional mechanisms that support implementation at the country level.