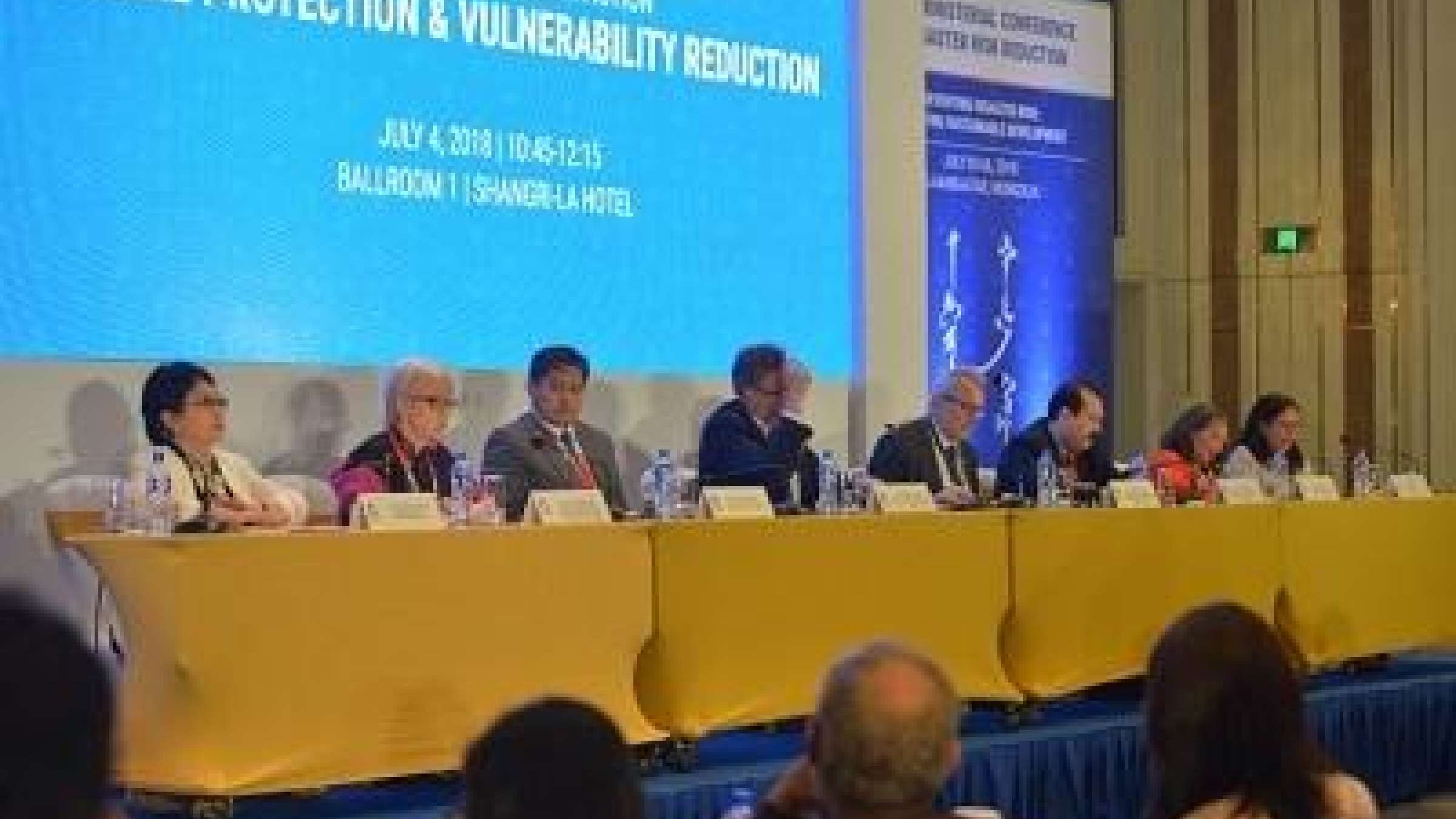 ULAANBATAAR, 5 July, 2018 - The role that safety nets and social protection programmes can play in reducing disaster risk features prominently on the agenda of the 2018 Asian Ministerial Conference on Disaster Risk Reduction (AMCDRR) this week.

A panel comprised of development and humanitarian actors, with senior representatives of the disaster management authorities from Mongolia and Pakistan, put forward a convincing case for greater investment in social protection policies and programmes.

“Social Protection is traditionally considered to be a development tool but it is now being used increasingly for shock response and early action. It has huge potential for building the resilience of vulnerable households and communities,” explains David Kaatrud, Regional Director for Asia Pacific with the UN World Food Programme (WFP).

“Systems like cash-based transactions provide a safety net when we see stresses on the horizon. They can also be used to help communities build back and recover in the wake of disasters”.

In Mongolia, 30% of the population are traditional nomadic herders whose livelihoods depend solely on their livestock. The country suffers a range of disasters, including the Dzud, a slow onset disaster unique to the country where summer droughts precedes a severe winter leading to a shortage of fodder for livestock.

In recent years the country’s livestock population has swelled to 66 million and 75% of rural pasture is considered to be degraded.

“The traditional response to Dzud has been mainly humanitarian, providing emergency relief and life-saving aid to herders and their animals”, explains Beate Trankmann, UN Resident Coordinator in Mongolia.

“Dzud is recurrent, they tend to hit the same populations in the northern belt of the country, making it predictable and to some extent plannable. Our focus is on working with the Government to develop better early warning mechanisms so that we can intervene before herder families reach crisis point”, she said.

The United Nations System is working with the National Emergency Management Authority of Mongolia (NEMA) in developing a monitoring system that uses 14 vulnerability indicators that can trigger early prevention measures. These indicators include precipitation levels, pasture land quality, levels of household indebtedness and sudden declines in the market price for meat.

According to Bolormaa Nordov, Secretary General of the Mongolian Red Cross, 30% of Mongolia’s herder population live below the poverty line. The Red Cross is using forecast-based financing as one tool, relying on scientific data and weather predictions to help herder families prepare for the impacts of impending Dzud.

“Ahead of the 2017/2018 Dzud we made cash transfers to households at risk, well in advance of the Dzud taking hold. We learned that many families made significant savings as they were able to buy fodder for their livestock at low prices before there were shortages in the market and prices escalated,” Ms. Nordov said.

In the wake of the deadly earthquake that struck northern Pakistan in 2005, the Pakistani Government introduced the countries first ‘plastic’ cash transfer system where ATM cards enabled 1.6 million people to access funds to meet their immediate needs and aid their longer-term recovery.  In 2008 the government rolled out the Benazir Income Support Programme under its social protection strategy, which provides monthly cash transfers to 22% of the population who live below the poverty line.

“The existing system can be adapted to target the poorest of the country before, during and post disaster but certain pre-conditions need to be met. There needs to be a good database with disaggregated data that is geo-tagged, and a good banking system and telecommunications network that covers far-flung areas”, explains Idrees Mahsud who works with Pakistan’s National Disaster Management Authority.

“Households and communities are not homogenous groups, we also need to make sure that we have good local level data on risks and vulnerabilities so we can target people with particular needs like households headed by women and children and people with disabilities.”

Eradicating poverty and reducing the number of people affected by disasters are at the heart of the 2030 Sustainable Development Agenda.