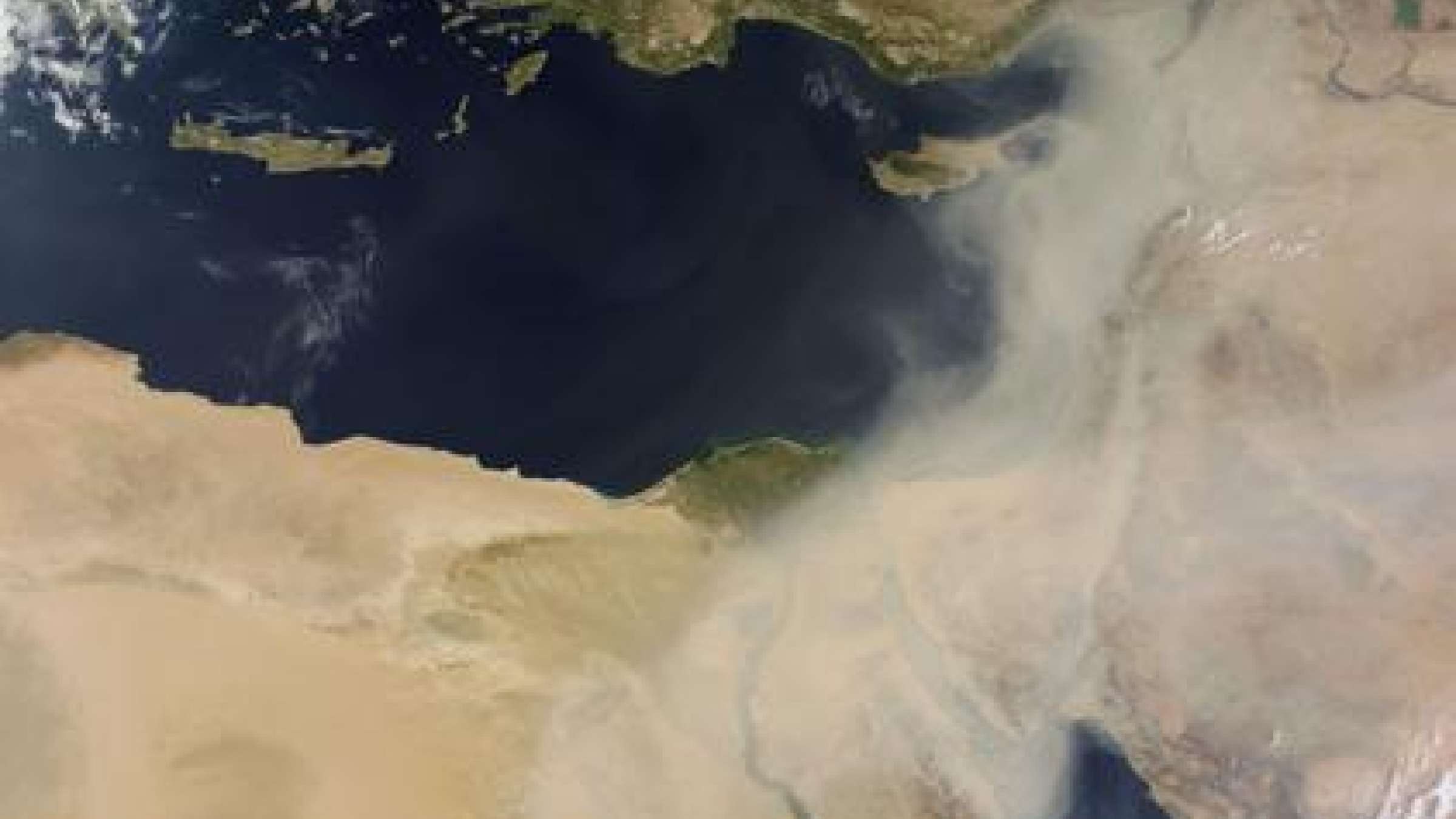 Snapshot of the sandstorm taken from NASA Earth Data

CAIRO, 14 September 2015 – Health services across the region continue to deal with the impact of the severe sandstorm which hit the Middle East last week, sweeping across Lebanon, Syria and Palestine, causing casualties and sending dozens to hospitals, as health risks particularly respiratory problems increased. Other countries in the region, like Iraq, Jordan, Egypt and Saudi Arabia, were affected by the clouds of dust and sand causing flight delays and disrupting school activities.

The heavy dust storm originated on September 7 in Lebanon, Syria, Jordan and Palestine and by September 8, it had swept southwest over much of the Middle East towards Egypt and Saudi Arabia. Sandstorms in the region, locally known as "khamaseen", are more common during February to May, triggered by lower pressure across the Levant during seasonal changes.

According to the Lebanese Health Ministry, hundreds of people were hospitalized with breathing problems and two women have died. Health officials urged those suffering from respiratory and heart problems as well as children, senior citizens and pregnant women to stay indoors. The meteorological department at Beirut's Rafik Hariri International Airport described the storm as being "unprecedented" in Lebanon's modern history.

In Syria, the sandstorm disrupted the fighting and air strikes and caused dozens of suffocation cases, including 3 casualties reported. According to the Syrian Observatory for Human Rights, hospitals in the city of al-Mayadin, in the province of Deir Ezzor, stopped to receive relief cases because there were no oxygen cylinders.

The sandstorm reached Egypt on Wednesday. Four Red Sea ports in the governorate of Suez -El-Sokhna, El-Adabiya, Petroleum and Tawfik- were closed due to the extreme weather conditions of the sandstorm, which impaired visibility.

Dust storms have worsened in East Asia and the Mediterranean regions over the last decade due to massive deforestation and increased droughts.

"Sand-dust storms, especially serious-strong sand or dust storms are hazardous weather events with extreme calamity. When they occur, they can move forward like an overwhelming tide and the strong winds take along drifting sands that cover farmlands, damage young crop plants and result in a loss of production", explained Dr. Wadid Erian, Prof. of Soil Science at Cairo University and Senior Advisor on Climate Change Adaptation and Disaster Risk Reduction at the League of Arab States.

"Sandstorms accelerate the process of land desertification and cause serious environment pollution with huge destruction to ecology and the living environment", he added.