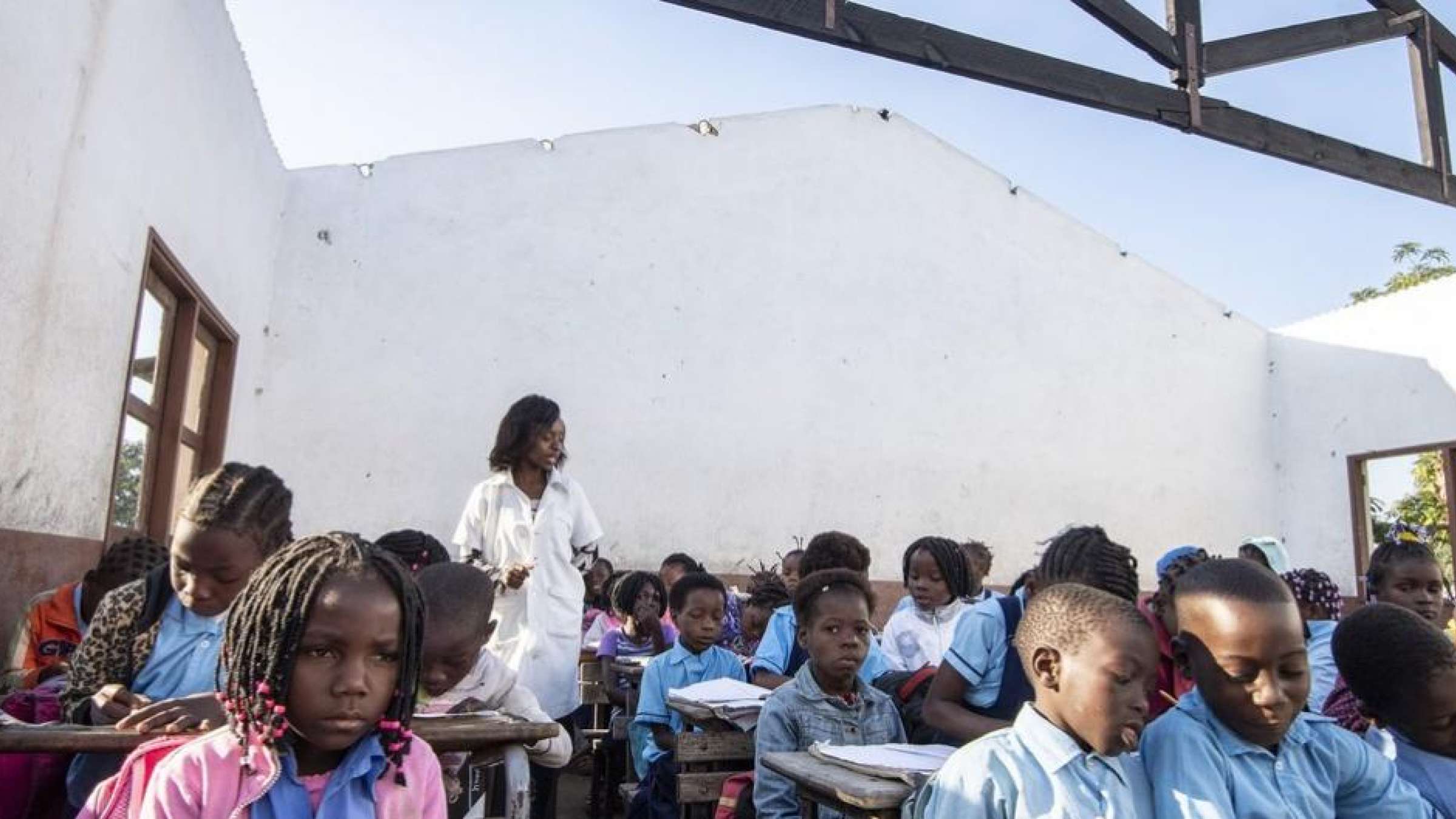 Classes continue in Beira after cyclone Idai in difficult conditions

BEIRA, 30 September 2019 - At the best of times, children in Mozambique struggle to attend school up to the age of 13 when poverty often blocks a move to high school.

At the worst of times, they sit in hot tents or in cyclone or flood shattered buildings with the roof and windows gone.

Even in a normal year, the country loses 600 classrooms to weather events and Cyclone Idai last March destroyed or damaged over 4,000, putting enormous pressure on the surviving facilities to cater to one of the youngest populations in Africa.

The Escola Completa 25 de Junho in Beira caters to 4,871 students aged six to 12 in four three-hour shifts throughout the day from 7 a.m., according to school principal, Federico Francisco.

Local people have started to call it the “Escola secretario geral" - Portuguese for secretary-general - in honour of the recent visit there by UN chief, Antonio Gutteres, who drew attention to a pavilion of three classrooms that withstood the 220 kph winds of idai, while many other classrooms in the compound lost their roofs.

Thanks to the work of UN Habitat, the Ministries of Public Works and the Department of Education and support from the World Bank, new standards for resilient school buildings are now being applied in Mozambique.

There is hope that the experience of Cyclone Idai has transmitted the message that it is better to "build to last", the theme of this year’s International Day for Disaster Reduction on October 13.

UN Habitat architect, Fernand Ferreiro, who has worked for 12 years in Mozambique, said a key milestone came in 2016 when wind speed maps were adopted to guide school construction standards. The 93 classrooms that were built to those standards all survived the cyclone.

According to UN Habitat Coordinator in Beira, Juan Hurtado, it is estimated that US$32 million is needed to rehabilitate schools in the central provinces of Sofala and Manica which were the worst affected by Cyclone Idai in March this year. He is also hopeful that the same principles of resilient construction can now be applied to other sectors including hospitals and housing.

Unicef representative, Eimar Barr, says a key challenge is getting children from resettled families back into education given that over a million people were affected by the damage or destruction to some 300,000 houses from the cyclone season.

Funding has now been secured for the rehabilitation of 157 classrooms in Sofala and Manica provinces and to provide some teacher training and materials for the children over the next six to nine months; a modest start compared to the scale of the needs for which adequate funding is not yet forthcoming.

Mr. Barr emphasizes that a key aspect of the rehabilitation programme will be to ensure the classrooms are accessible to children with disabilities.

His estimation is that enrollment in primary schools is high across the country at between 80% to 90% and there is parity between boys and girls but the transition to secondary or high school is low “because of poverty.”

He also flags the fact that Unicef is working against the problem of early marriage and welcomes the new law which makes child marriage a criminal offence for both parents and the man involved.

The scale of the problem is revealed by the fact that UNFPA has provided ante-natal consultations to 71,000 girls aged between 15 and 19 since April this year across the cyclone affected areas.