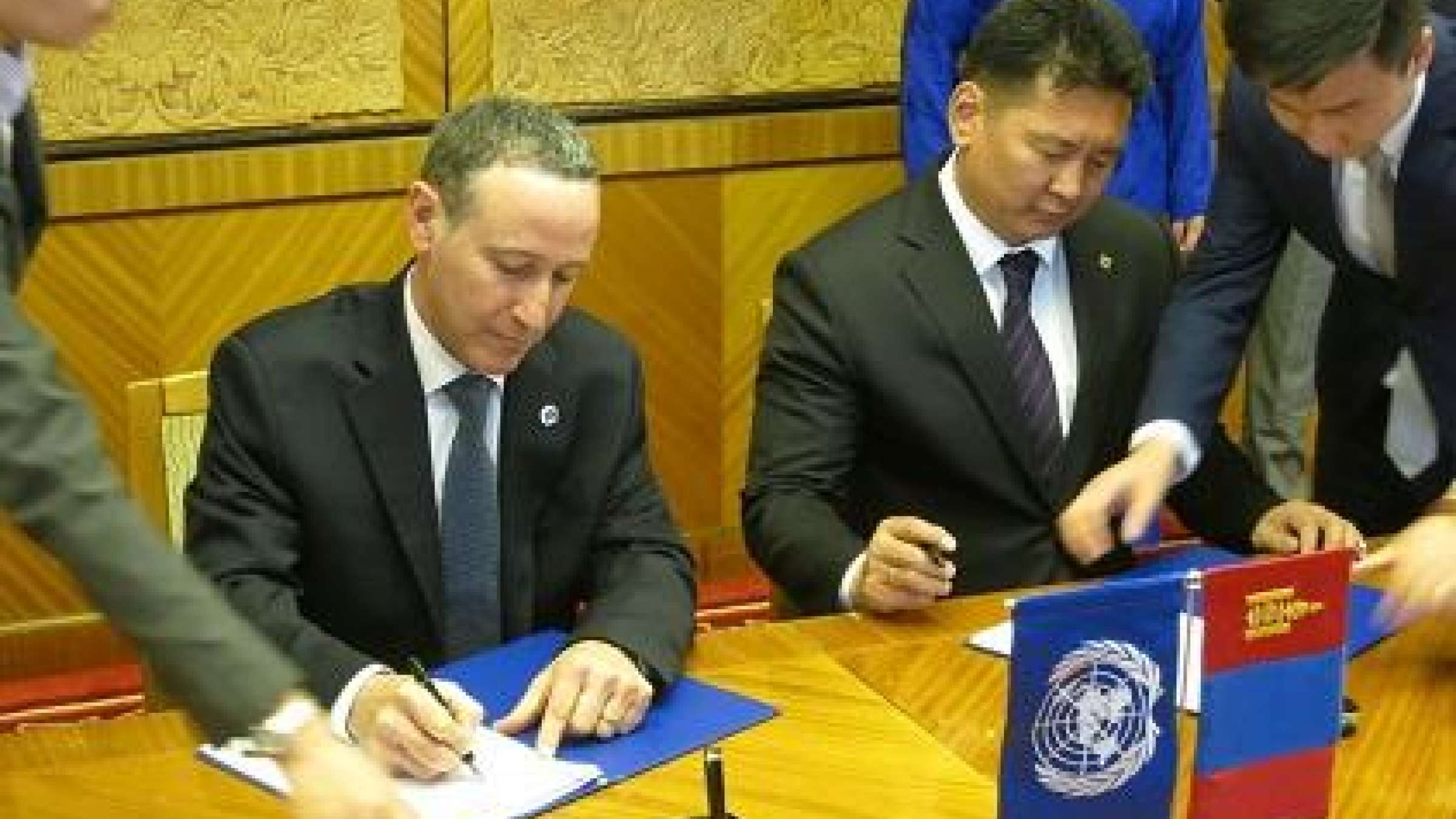 ULAANBAATAR, 7 April 2017 – Mongolia has pledged to lead by example and inspire countries across Asia to meet the most pressing target of the Sendai Framework for Disaster Risk Reduction, a global blueprint for tackling natural and human-induced hazards.

The Deputy Prime Minister of Mongolia, Mr. Khurelsukh Ukhnaa, said it was vital for countries and cities across the world’s most hazard-prone region to develop or redraft national and local disaster risk reduction plans in line with the Sendai Framework to save lives and protect development gains.

The Sendai Framework, adopted by the international community in 2015, aims by 2030 to bring about substantial reductions in disaster losses. To achieve that, it sets an interim target date of 2020 for national and local governments to have disaster risk reduction plans in place.

The issue will be in the spotlight next month at the 2017 Global Platform for Disaster Risk Reduction, in Mexico.

Mr. Khurelsukh outlined how Mongolia has drafted its 2020 Strategy for the Implementation Plan of the Sendai Framework, which “the government sees as part of its commitment to meet” the goal.

He issued his call for action as Mongolia signed a Statement of Cooperation with UNISDR to host and co-organize the next Asian Ministerial Conference on Disaster Risk Reduction (AMCDRR) in July 2018.

The Deputy Prime Minister said Mongolia was determined to use the AMCDRR as an opportunity to showcase how his country’s prioritization of disaster risk reduction governance had made a clear positive impact on the ground.

“Our reformulated Law on Disaster Protection of Mongolia was adopted by Parliament in February.  As a result, we have an improved disaster risk management system which effectively organizes disaster prevention and the coordination of domestic and international aid during disasters,” Mr. Khurelsukh said.

He added: “Mongolia is deeply concerned by the increase in frequency and number of occurrences of natural and human induced disasters and their negative consequences and damages, as well the possibility of creating new risks.

“This is happening not only Asia but also around the world due to global warming and climate change, environmental degradation, loss of ecological balance, urbanization and impacts of social development.”

At Wednesday’s signing ceremony, the Special Representative of the UN Secretary-General for Disaster Risk Reduction, Mr. Robert Glasser, said Mongolia’s decision to host the AMCDRR was “a clear demonstration of leadership of the disaster risk reduction agenda in Asia”.

“The AMCDRR also provides a unique opportunity for Mongolia to strengthen the awareness and understanding of disaster risk reduction right down to the local district level,” said Mr. Glasser, who is also Head of the UN Office for Disaster Risk Reduction (UNISDR).

“I am very impressed by the strategic thinking on disaster risk reduction of the Government and, in particular, the Deputy Prime Minister. For instance, they rightly identify greater urban disaster resilience and effective public-private partnerships as among the most important elements for the successful implementation of the Sendai Framework for Disaster Risk Reduction in Asia.”

Government and stakeholder representatives from around Asia, as well as several journalists, witnessed the official signing ceremony in Government House. The event was a prelude to the three-day 2017 ISDR Asia Partnership (IAP) meeting, which acts as the regional mechanism to prepare the biennial AMCDRRs. The 2016 edition of the AMCDRR was hosted by India in New Delhi.

The IAP has attracted 20 governments as well as representatives from inter-governmental and international organizations, business, academia, civil society, the Red Cross and Red Crescent and various other sectors who will provide technical and strategic input to ensure the AMCDRR continues to inspire implementation of the Sendai Framework.

Mongolia is sparsely populated, with three million people living in an area twice the size of France. It is also the world’s second-largest landlocked country after Kazakhstan.

It is vulnerable to a wide variety of natural hazards, including floods, droughts, earthquakes, storms and other extreme weather events, including dzud, a severe winter in which large numbers of livestock die primarily from starvation.