Let’s go beyond the death toll in disaster data collection 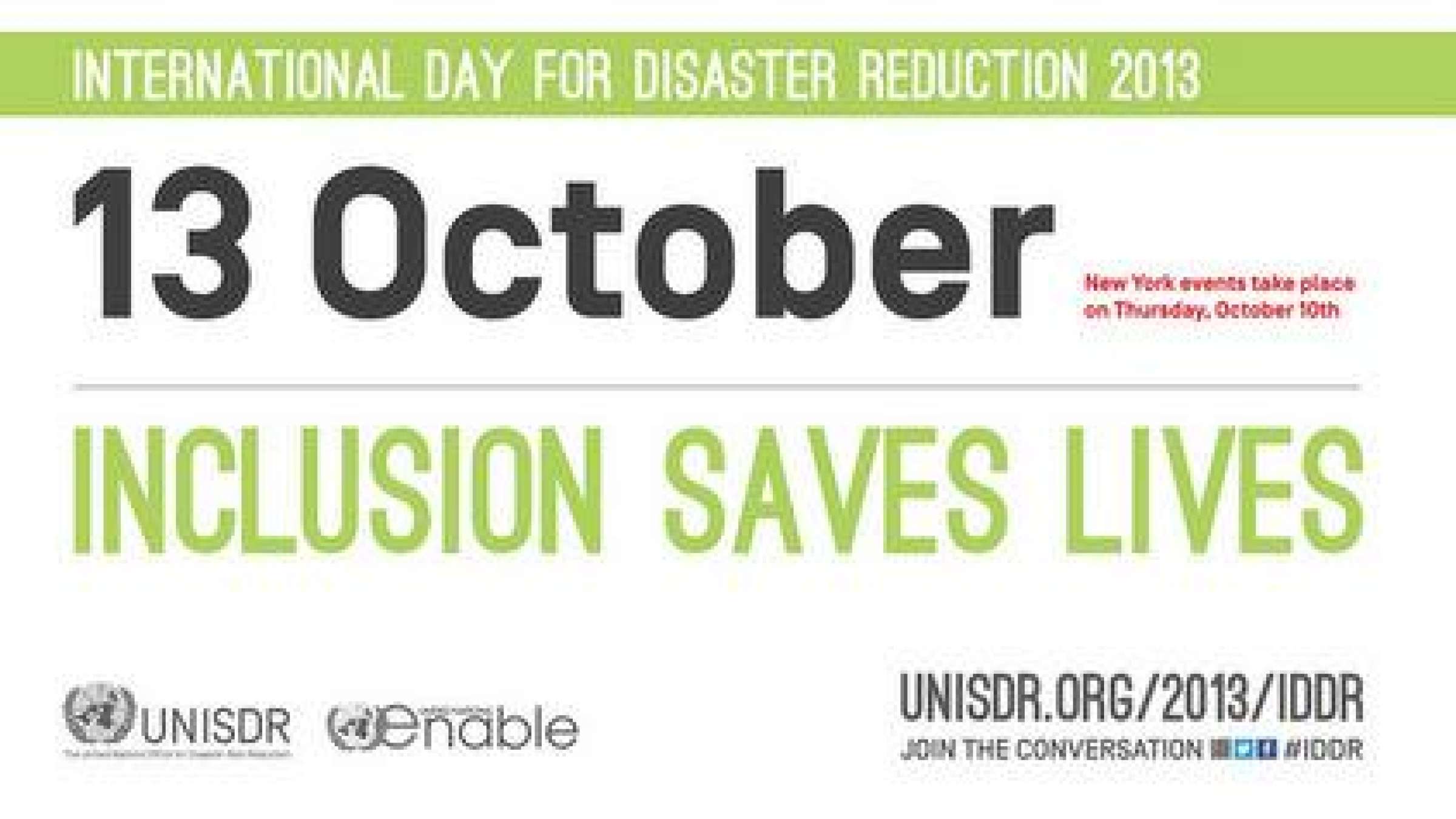 NEW YORK, 27 September 2013 – UNISDR Chief Margareta Wahlström made a special plea this week for improved data collection in disaster situations in order to provide a better insight into disability-related injuries.

In parallel with high-level proceedings at the United Nations General Assembly, leading disability and disaster risk reduction advocates came together in New York to share lessons from disasters past.

“For instance, disasters can create new and sometimes permanent disabilities in the lives of many persons, with implications for them, their families, their community and the whole economy. Yet, after disasters occur, what is always reported is the death toll but data is rarely collected on the number of persons disabled by the event.”

Ms. Wahlstrom was speaking at an event titled “Special Event on Disaster and Disability: Lessons from Japan”, which was hosted by the Japan Disability Forum (JDF) in cooperation with the Nippon Foundation. A recurring theme of the meeting was that when certain populations are isolated from the larger community, or are not thought a valuable part of the social fabric, they suffer.

UNISDR has launched a worldwide survey of persons living with disabilities and how they cope with disasters. The results to date will be published in time for International Day for Disaster Reduction which falls on October 13. Survey responses have been received from over 120 countries.

“During the 2011 earthquake and tsunami in Japan, there was higher mortality among persons with disabilities living in communities than those living in institutionalized settings,” said Mr. Osamu Nagase of the Japan Disability Forum, pointing to the need for greater awareness and understanding among communities of the persons with disabilities living within.

Rikuzentakata City in the Iwate Prefecture “was almost wiped off the map” by the Great East Japan Earthquake and Tsunami of March 2011 leaving much of the population reliant on shelters in the aftermath.

Rikuzentakata’s Deputy Mayor, Takashi Kubota, shared some lessons his city learned the hard way. “Firstly, a shelter must be made particularly for persons with disabilities equipped with adequate supplies and trained caregivers in anticipation of another extreme event,” he said.

“Secondly, during times of disaster, there must be mechanisms to facilitate disclosure of personal data for emergency response. Otherwise, personal information protection legislation can prevent responders from finding and helping persons with disabilities.

“Finally, there is a need for an attitudinal shift so that persons with disabilities should never feel like they need to hide their needs or hesitate to ask for assistance when they need it. But having to rebuild our city is also an opportunity – to get it right this time around,” the Deputy Mayor concluded.

Marcie Roth, Director of the Office of Disability at the UD Federal Emergency Management Authority, spoke for a shift away from certain words that perpetuate the image of persons with disabilities as dependent, burdensome, and somehow isolated from the rest of the community.

Looking at Bangladesh’s experience with recurrent cyclones, Mr Mosharaf Hussain of the International Disability Alliance said that inclusion is a matter of developing the competencies and social awareness of risk managers and responders.

“During Cyclone Mala in 2006, where more than 200,000 persons were affected in total, persons with disabilities were often not adequately helped because no one knew how to,” he stated.

“It is a matter of capacity building. Since cyclones are recurrent in Bangladesh, what is needed is systematic training of responders in advance so that they have the knowledge and skills to respond to the whole community. At the same time, we need to be mindful to not treat persons with disabilities as recipients but rather as contributors to these processes.”

The event was hosted by the Japan Disability Forum in cooperation with the Nippon Foundation, under the auspices of the Permanent Mission of Japan to the United Nations, and supported by the International Disability Alliance (IDA), and Rehabilitation International (RI).

Thousands of people around the world are currently participating in the first-ever survey of people living with disabilities and disasters – organised by the UN Office for Disaster Risk Reduction (UNISDR) and partners – to mark the 2013 International Day for Disaster Reduction on 13 October.

Have Your Say! If you’re living with a disability or you are a caregiver, take our survey and share your thoughts on living with disasters. The survey is available here in several languages.