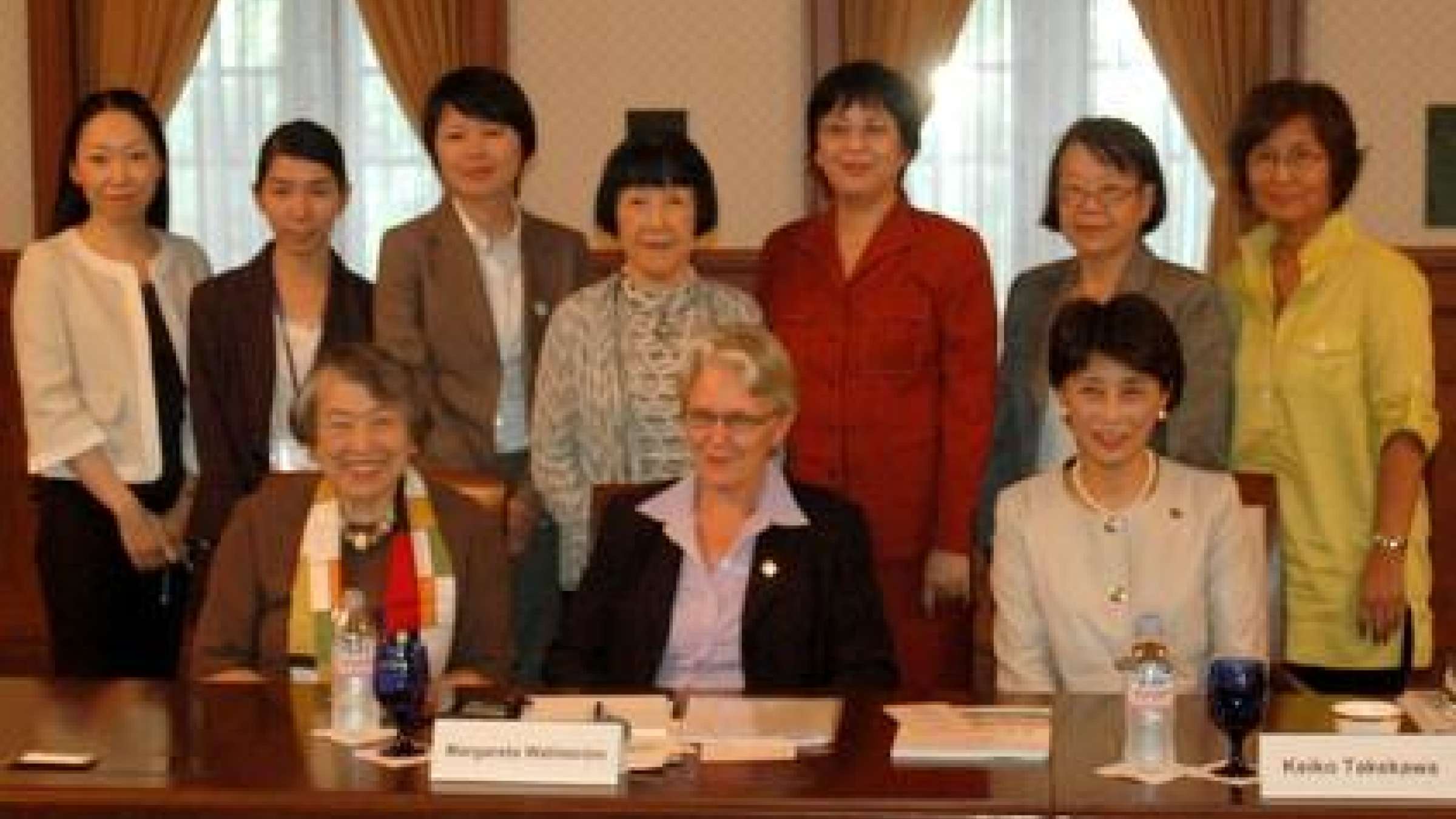 KOBE, 16 October 2012 - A panel of eight leading women experts meeting at the birthplace of the Hyogo Framework for Action called on UNISDR Chief, Margareta Wahlström, to exert pressure for gender equality in disaster risk reduction. The dialogue with Ms. Wahlström was part of Kobe's observance of International Day for Disaster Risk Reduction.

The high-level panel concluded: "Practices around the world that exclude rather than include women in decision-making, reinforce inequality and hamper the ability of communities to become, and stay, resilient to disasters."

The Hyogo Framework for Action 2005-2015: Building the Resilience of Nations and Communities to Disasters was agreed by UN Member States at the World Conference on Disaster Reduction in Kobe seven years ago, a few weeks after the Asian tsunami. The HFA Mid-Term Review of country-level implementation found that only 20% of planned disaster risk reduction activities take gender into account.

In a one-hour dialogue with Ms. Wahlström, participants contested the stereotype that women were helpless victims in times of disasters. They stressed: "Women have the knowledge, the organizational networking capabilities, and the proven ability to lead in the planning and implementation of disaster risk reduction and response."

The panel said pressure from the international community could help tip the balance towards gender equality in disaster risk reduction in countries such as Japan, and called on Ms. Wahlström to help exert that pressure.

Dialogue facilitator Keiko Kiyohara, Vice President of the Hyogo Earthquake Memorial 21st Century Research Institute, said the treatment of women during and after the Great East Japan Earthquake in March 2011 suggested that the nation needed to strive for better standards to empower individuals, with particular attention on the status of women.

"A lot of actual work is being done by women, but not integrated into policies and the decision-making process. It's a challenge for women to be visible. In disaster risk reduction, more social issues need to be advanced, not just infrastructure related issues," said former Governor of Chiba Prefecture in Japan, Akiko Domoto, in agreement with Ms. Kiyohara.

After the Great East Japan Earthquake, revisions were made to the Basic Plan for Disaster Prevention of Japan in December 2011. Another panelist, Hiroko Hara, a professor specializing in gender issues at Josai International University and Professor Emeritus of Ochanomizu University, said although the revised plan incorporates the gender equality perspective, a section of the plan dealing with disaster, restoration and reconstruction, "lacks the perspectives of gender equality or had no mention of gender equality under several sub-items."

Yoriko Meguro, who chairs the NGO Gender Action Platform, highlighted areas in Japanese policy where there was inadequate consideration of specific needs of women and unequal access to economic support to women. She also pointed out the existing institutional gaps in supporting pregnant and nursing mothers after disasters. With support from Oxfam Japan, her NGO is seeking to influence government policy on gender and disaster risk reduction.

Reiko Masai, President of Women's Net Kobe, established a women's support network for distributing relief goods and offering telephone counsel to women after the Great Hanshin-Awaji Earthquake in 1995, which killed over 6,000 people and wiped out 2.5 per cent of Japan's GDP at the time.

After the Tohoku earthquake and tsunami, she launched a similar women's network for the East Japan Disaster, conducting surveys and producing publications on women's needs in and after disasters, which was submitted to the government to support policy recommendations.

"When I visited the quake-devastated area, I observed that measures to prevent violence against women had been put in place, which was different from 16 years ago. What had not changed was the lack of a female presence in operational management, which reinforced gender-based roles at evaluation shelters."

A paper presented by Keiko Takegawa, Deputy Director-General for Gender Equality, in Japan's Cabinet Office, "Disaster Prevention and Reconstruction from a Gender Equal Society Perspective -- Lessons from the Great East Japan Earthquake," confirms this view, reporting the traditional gender role perpetuated through the idea that men should clear rubble while women should prepare meals for the evacuation site. In many cases, a daily allowance was provided for clearing rubble while no such compensation was provided for working on food preparation.

The Cabinet annually submits a report to the Diet on the White Paper on Gender Equality, which monitors the status of the formation of a gender equal society by the Japanese Government.

Yoko Saito, a Researcher at the Disaster Reduction and Human Renovation Institute (DRI), which co-organized the dialogue with the UN Office for Disaster Risk Reduction in Kobe, also stressed the importance of gender equality in shelter management, including responsibility sharing within shelters.

In line with the theme of the International Day for Disaster Reduction, Tamiyo Kondo, Associate Professor of Kobe University and Research Fellow at DRI emphasized the importance of involving young people in disaster prevention planning.

The dialogue between Ms. Wahlström and the eight women took place as part of a forum on "International cooperation towards the Creation of a Society Safe and Secure against Disasters", co-organized by UNISDR and the Disaster Reduction and Human Renovation Institute (DRI), a body established in 2002 by the Hyogo Prefectural government and supported by the Japanese national government.

The Forum was attended by Mr. Mikio Shimoji, the Japanese Minister on Disaster Management and Mr. Toshizo Ido, Governor of the Hyogo Prefecture.