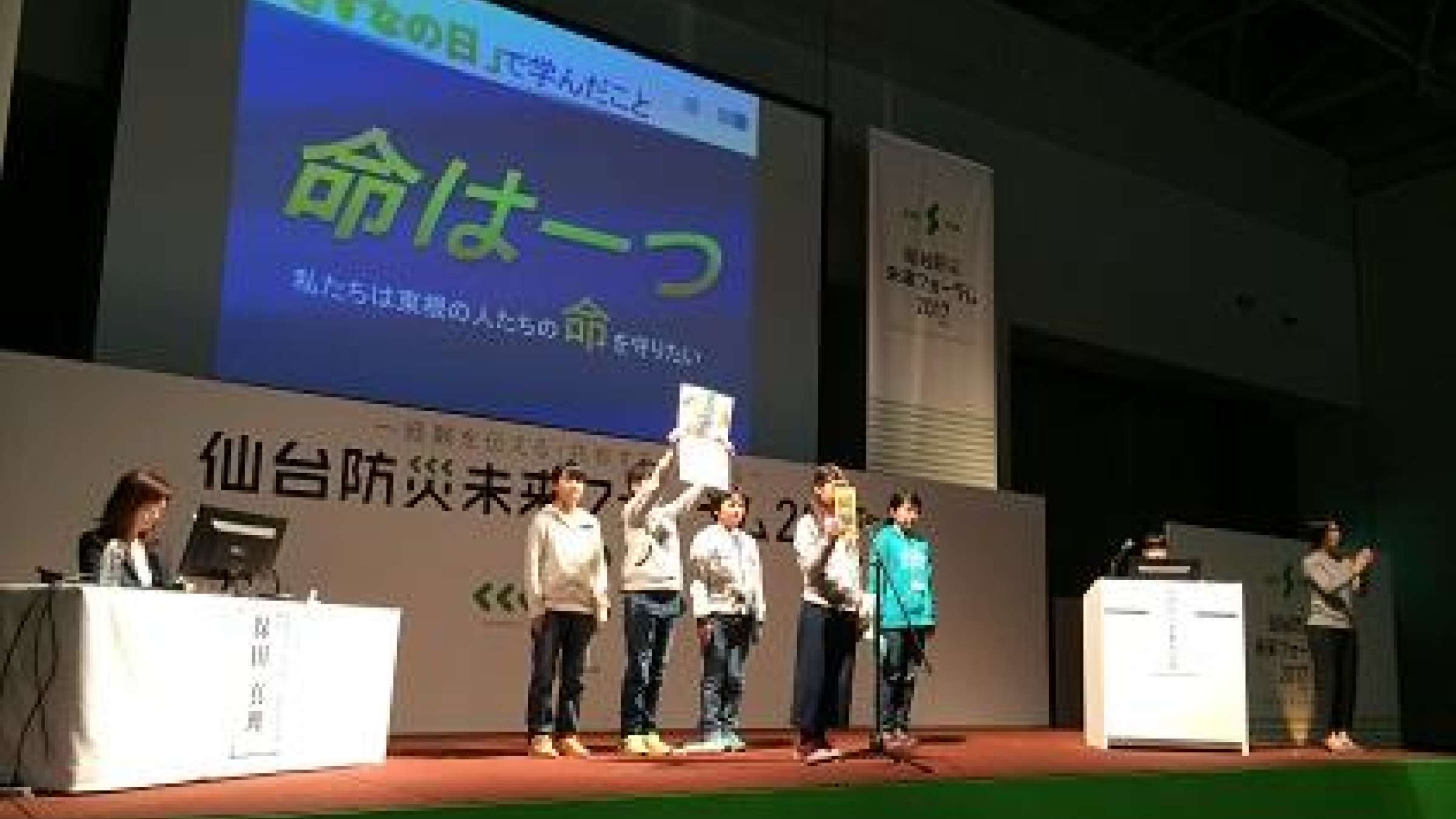 Caption: Children from Higashine elementary school show delegates the disaster risk information leaflet that they made for their community (Photo:UNISDR)

SENDAI, Japan, 23 March 2017 – Schoolchildren and businesses in Japan are working hard to implement the Sendai Framework for Disaster Risk Reduction, a 15-year blueprint adopted at a UN conference in their country in 2015.

Six years after the Great East Japan Earthquake and Tsunami, the city of Sendai hosted a special symposium on disaster risk reduction. It was held in the Sendai International Center, where thousands of delegates had attended the March 2015 Third UN World Conference on Disaster Risk Reduction that issued the Sendai Framework.

The latest Sendai event showcased the work of pupils from Higashine elementary school in Miyagi Prefecture, of which Sendai is part. Six pre-teens gave delegates a presentation about their initiative, which aims to help their community curb risk.

"We discussed what we can do, based on what we’ve learnt in a disaster risk reduction class by a teacher from Tohoku University. Then we made a pamphlet called 'Look at this! Useful life-saving action!' to share it in our community. We want to protect our community and save precious lives from disasters," they said.

Sendai is the urban hub of the Tohoku region, which was battered by the disaster of 11 March, 2011. The city stood out for its rapid restoration of utilities, roads and homes, and the clearance of debris, all within 18 months of the tsunami and always with open communication with residents. As a result, the UN Office for Disaster Risk Reduction (UNISDR) in 2012 recognized it as a role model for its Making Cities Resilient campaign.

The Sendai Framework, which runs to 2030, has seven targets. It aims to bring about substantial reductions in disaster deaths, the number of affected people and economic losses, plus damage to critical infrastructure and disruption to basic services such as health and educational facilities. It also seeks to increase the number of countries with national and local risk reduction strategies, bolster the capacity of developing countries, and vastly increase coverage by early warning systems.

The agreement also underlines the importance of disaster risk reduction by the private sector. With that in mind, on the eve of this year’s memorial day for the 2011 disaster, over 100 representatives from Japan’s business world gathered with officials for a special event in Tokyo under the banner of the UNISDR Private Sector Alliance for Disaster Resilient Societies (ARISE).

The event, co-organized by the UNISDR Office in Japan, is held annually around the anniversary of the 2011 disaster. This year it focused on how businesses may meet the challenge of extreme weather events, a topic in focus in Japan since the adoption of both the Sendai Framework and the Paris Agreement on climate change in 2015. The latter reemphasized the importance of disaster risk reduction in managing the threats posed by climate change.

Speakers from Japan’s Cabinet Office, which coordinates the country’s disaster management, the Ministry of Environment, overseeing climate change adaptation, and the Ministry of Land, Infrastructure, Transport and Tourism, which leads the planning and implementation of measures against extreme weather risk, laid out the latest developments, including how they see the private sector’s role.

Seven ARISE member companies, with expertise ranging from insurance, manufacturing, engineering, business management, to tourism, then discussed real examples and practices that are geared towards assessing, understanding, and dealing with increasing levels of disaster risk, and also fielded questions from a panel of experts.

“The importance of public-private partnerships is highlighted by bringing both government and business leaders together,” said Ms. Sandra Wu and Mr. Masato Takamatsu, both of whom are members of ARISE’s global board. “The event also showcased how individual ARISE member companies are actively working to raise awareness, exercise influence in their spheres of expertise, share knowledge, catalyse innovation and collaboration, and implement tangible practices across various industries, as an example of how private sector contributes to the implementation of the Sendai Framework.”