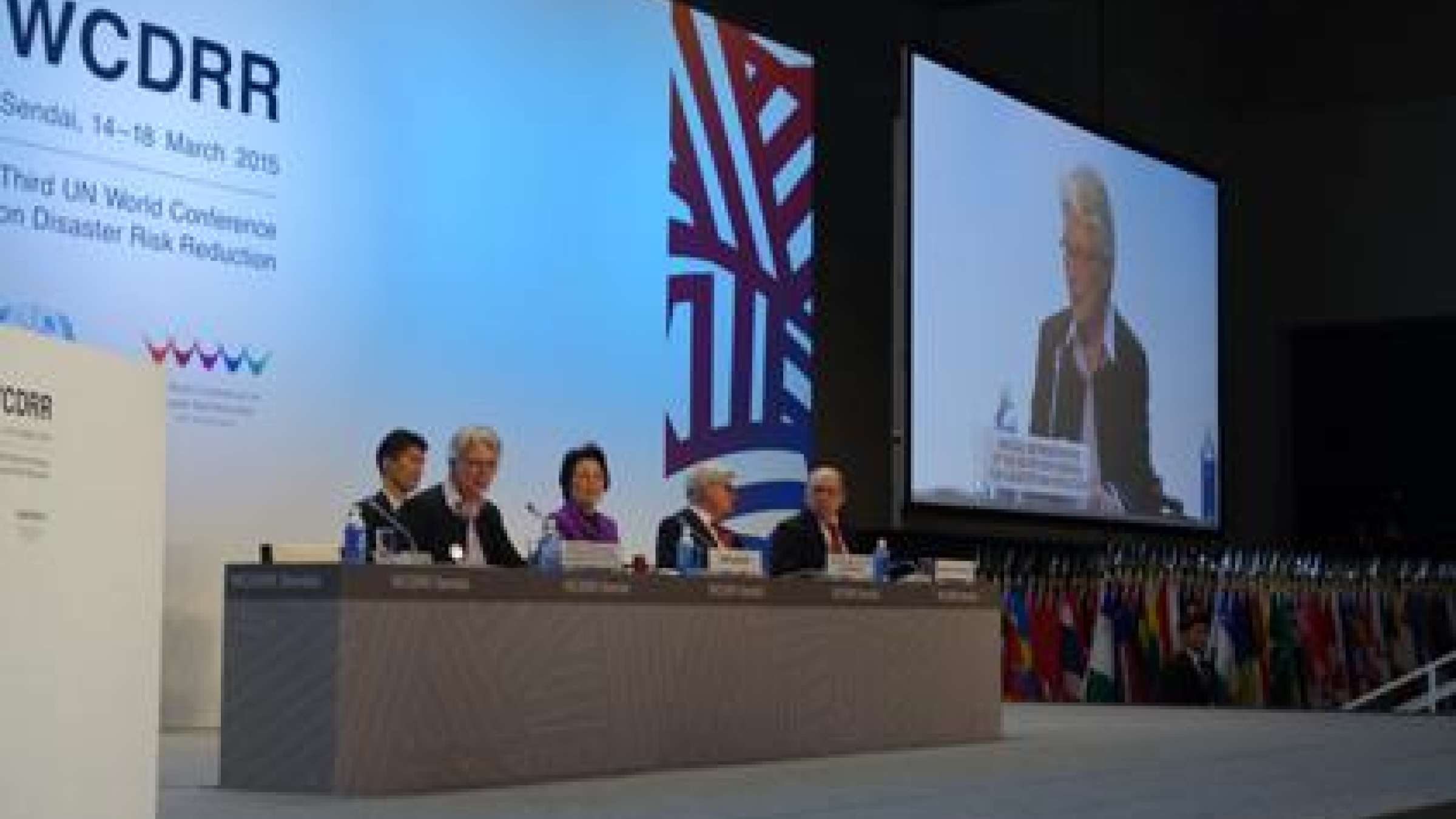 The closing plenary of the World Conference of Disaster Risk Reduction in Sendai, Japan. (Photo: UNISDR)

SENDAI, 24 March 2015 — Death and destruction from earthquakes, extreme weather and other hazards around the world would be decreased significantly by 2030 according to goals set today by countries meeting at the Third World Conference for Disaster Risk Reduction, which closed this evening in Sendai, Japan.

Through the Sendai Framework for Disaster Risk Reduction 2015-2030, the Conference outcome, participants requested the United Nations General Assembly to integrate into its post-2015 strategy for sustainable development seven goals to reduce risk for loss of life, livelihood and critical infrastructure from disasters, through enhanced national planning and international cooperation.

The new Framework calls for concrete indicators of progress towards those goals to be measured against the disaster losses in the decade after the adoption of the 2005 Hyogo Framework for Action, its predecessor. Noting the rapid growth of population in urban areas, it also calls for such progress to be measured per 100,000 people globally.

To reach its goals, the Framework calls for actions to not only protect populations and promote quick recovery, but also to prevent new risks, such as those caused by ill-planned urban growth in areas subject to flooding, landslides and effects of climate change. “It is urgent and critical to anticipate, plan for and reduce disaster risk in order to more effectively protect persons, communities and countries,” the document states.

Integration with global regimes to mitigate and adapt to climate change and promote sustainable development is among the key objectives of the new Framework, as is inclusively addressing risk through economic, governance, structural, legal, social, cultural, educational and health-related sectors, as well as through related United Nations organs.

For all those purposes, a substantial increase in international cooperation, from a variety of sources, will be needed to boost the capabilities of developing countries, the document states.

“The adoption of this new Framework for disaster risk reduction opens a major new chapter in sustainable development as it outlines clear targets and priorities for action which will lead to a substantial reduction of disaster risk and losses in lives, livelihood and health,” Margareta Wahlström, Head of the United Nations Office for Disaster Risk Reduction (UNISDR) said at the Conference closing.

“Implementation of the Sendai Framework for action over the next 15 years will require strong commitment and political leadership,” Ms. Wahlström added, noting that stakeholders had already made 120 voluntary commitments for risk reduction initiatives at the Conference, in addition to 88 others made in the lead-up to the event.

At the Conference, Ms. Wahlström reported, delegates from 187 countries, including over 25 heads of State and Government and dozens of ministers and other senior officials, engaged in intense negotiation and debate to finalize the new framework. Along with national statements and negotiations, the intergovernmental process also included five ministerial round tables on critical themes for the new framework.

The Conference also heard from parliamentarians, civil society, national platforms for disaster risk reduction, local government representatives, scientific institutions and the private sector, as well as agencies of the United Nations system and intergovernmental organizations. The Public Forum had 143,000 visitors over the course of the Conference.

In addition to deciding on a new framework to manage disaster risk, today’s outcome document summarized reviews of the 2005 Hyogo Framework, which was adopted following the devastating Indian Ocean tsunami. Sendai participants agreed that much progress had been achieved during the decade under the Hyogo Framework in reducing risk at local, national and regional levels, leading to a decrease in mortality in the case of some hazards.

According to the outcome document, over the period, many countries enhanced their capabilities in disaster risk management. Furthermore, international mechanisms for advice, coordination and partnership were developed for that purpose, including the global and regional platforms for disaster risk reduction.

However, over the same 10-year period, it notes, disasters continued to exact a heavy toll, with more than 700,000 people losing their lives, over 1.4 billion injured and over 23 million left homeless. More than 1.5 billion people overall were affected by disasters. Increasingly, recurring small-scale and slow-onset disasters were hitting people at the local and the community level, with women, children and other vulnerable persons disproportionally harmed.

The new Framework, accordingly, addresses in detail the disaster risk situation of localities and all nine major vulnerable groups, with an additional focus on empowerment of persons with disabilities in planning for risk management and resilience.

At the Conference closing, officials paid tribute to delegates for having taken into account the experience gained through implementation of the current Hyogo Framework for Action. The Co-Chair of the Conference Main Committee, Thani Thongphakdi of Thailand, thanked all those who had “persevered over these last five days to deliver a framework that will guide disaster risk reduction for the next 15 years”.

Conference President Eriko Yamatani, Japan’s Minister for State for Disaster Management, said: “Japan’s special relationship with the global disaster risk reduction community has been strengthened by the outcome of this World Conference. Successful implementation of this new framework will mean a reduction of existing levels of disaster risk and avoidance of the creation of new risk.”

With a view towards a coherent strategy to current global challenges, the Sendai Conference outcome represents the “first step of our journey to a new future”, United Nations Secretary-General Ban Ki-moon explained as he opened the Conference on 14 March.

A strong Conference outcome, he said, would put the world on a path to a new sustainable development agenda with new global goals at its core. That would take place in a year that would not only include finalization of the post-2015 sustainable development strategy, but also a conference to agree upon an international climate change regime in Paris in November and a meeting on development financing to turn those plans into results, set for Addis Ababa, Ethiopia, in July.

Following the adoption of the Framework at the evening’s closing session, the Conference adopted a resolution thanking Japan for hosting the event. Round table summaries were presented by María del Pilar Cornejo, Minister for the Secretariat of Risk Management of Ecuador.

The Conference also adopted a resolution on credentials, presented by Shameem Ahsan of Bangladesh. It adopted its draft report as presented by the Rapporteur-General of the Conference, Toni Frisch, Special Adviser on Disaster Risk Reduction of Switzerland.

Finally, by adopting a political declaration in support of the implementation of the new Framework, participants called upon all stakeholders to take action, stressing that “the realization of the new Framework depends on our unceasing and tireless collective efforts to make the world safer from the risk of disasters in the decades to come for the benefit of the present and future generations”.