Get to high ground! 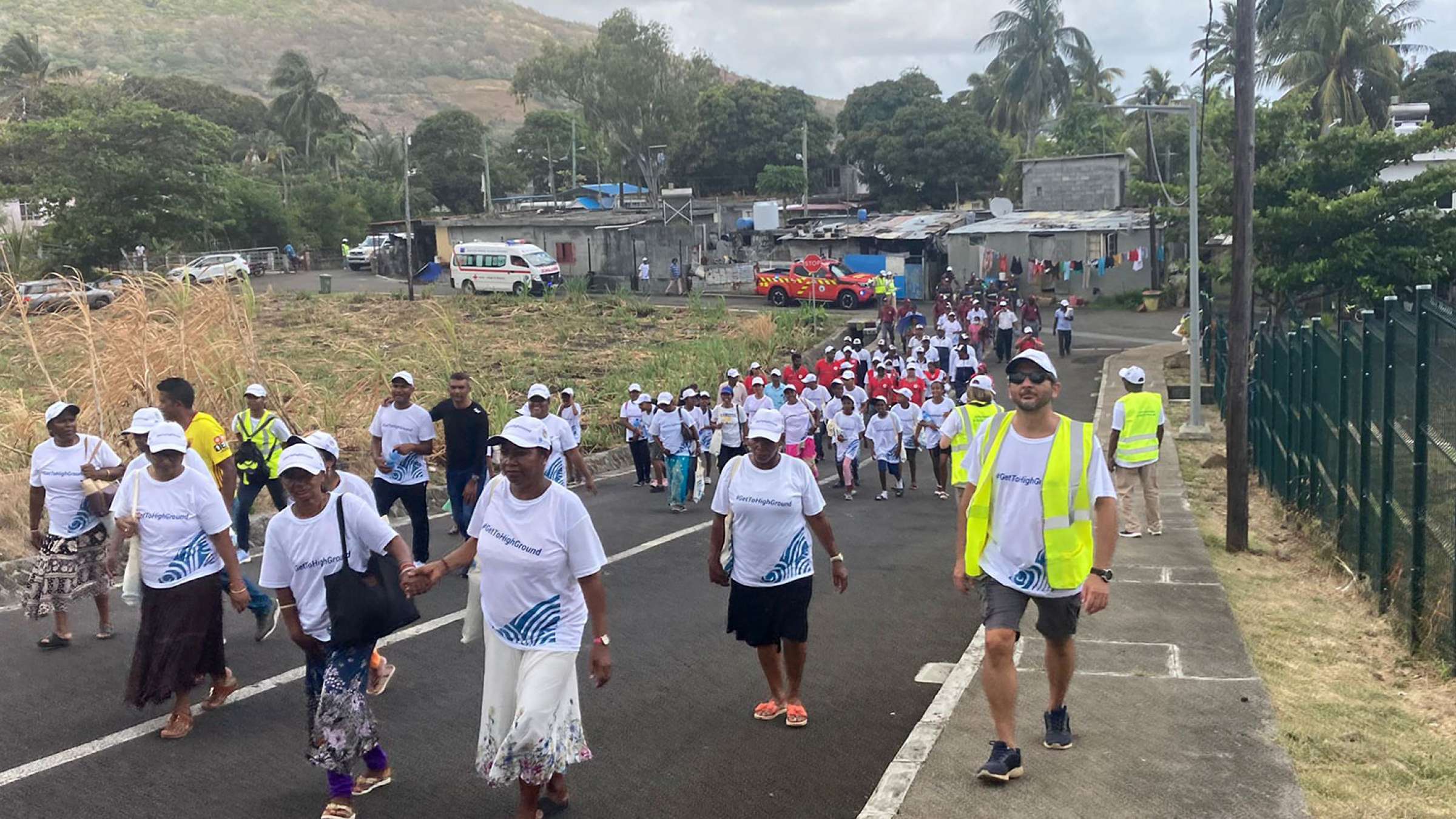 Early warning systems alert communities that a tsunami is on its way – but the public needs to be prepared to act and reduce the risk. A new UNDRR initiative inspires tsunami preparedness.

The walks were organised by the National Disaster Risk Reduction and Management Centre in Mauritius and Municipal Civil Protection Office of the Sesimbra City Hall in Portugal, and UNDRR.

A culture of preparedness in Mauritius

Mauritius, a Small Island Developing State, faces several major disaster risks: tropical cyclones, floods, earthquakes, and, of course, tsunamis. The country has weathered major disasters – the most devastating of which was Cyclone Carol in 1960, which took 42 lives and razed over 100,000 buildings.

Today, an up-to-date multi-hazard early warning system has improved resilience. But early warnings are only effective when the population is prepared to take early action. Bolstering a culture of awareness and preparedness for tsunamis and other coastal hazards is a priority for the country.

Marching to the same tune

The Mauritian #GetToHighGround campaign was launched with a symbolic walk along the coastal evacuation route in the Quatre-Sœurs area, ending at the Quatre-Sœurs Emergency Shelter which stands on high ground.

The walk was followed by a training session on what to do in the event of a tsunami.

A military marching band kept up the buoyant mood, marking time for officials, guests and walkers from the community – including persons with disabilities, older persons and children. When a tsunami strikes, no one should get left behind.

While rare in Europe, tsunamis do occur – and they can be devastating.

In 1755 Portugal was hit by a major earthquake – around 9 on the Richter scale – that triggered tsunami waves up to 5-6 meters high in Lisbon.

There have been more recent (although less deadly) earthquakes and tsunamis – in February 1969 in continental Portugal, killing 25 people and injuring around 80, and in January 1980 in the Azores, causing 61 deaths and injuring more than 400 people. Experts have warned that another earthquake may occur – and risk reduction measures would be prudent to help protect the hundreds of thousands of people who live on its increasingly urbanized shores.

The country has several mechanisms in place to provide early warnings of key risks, including the Seismic Network and the Regional Tsunami Warning Centre. Raising awareness and building a culture of preparedness is crucial for the population living in risk prone areas.

The town of Sesimbra is a Member of Making Cities Resilient 2030 (MCR2030), a UN-led global collaboration that mobilizes governments and other committed stakeholders to strengthen their disaster and climate resilience. MCR2030 advocates for tsunami-exposed municipalities to prioritize managing the risk associated with this deadly hazard. Experience from such municipalities consistently points to tsunami risk reduction as a worthwhile investment.

Appropriately, the #GetToHighGround campaign kicked off in the Sesimbra area with a walk following coastal evacuation routes from four different starting points. Participants were invited to take a quiz on how to to respond to a tsunami. Portugal’s Secretary of State for Home Affairs Patricia Gaspar and Deputy Mayor of Sesimbra Marcio Souza joined the walk, taking the opportunity tto highlight the importance of reducing tsunami risk. This walk, they noted, marked a starting point for ongoing activities planned by the Municipal Civil Protection Office to improve resilience against tsunamis, as part of wider strategy in Portugal.

“Having plans, having people on board, is really important to make sure we can actually save lives” said Ms Gaspar.

The two walks, in Sesimbra in Portugal and in Quatre-Sœurs in Mauritius, are just the beginning.

UNDRR’s new #GetToHighGround initiative – launched on World Tsunami Awareness Day, 5 November – aims to activate citizens through participation in a drill, a symbolic run, or a walk along tsunami evacuation routes, wherever tsunamis pose a threat.

These activities will raise awareness about reducing tsunami risk and help communities to prepare their own tsunami responses and action against future risks. The events are an inclusive and engaging way to involve all people in raising tsunami risk awareness, while initiating preparation for emergencies.

When a tsunami strikes, no one should be left behind

Tsunamis must be treated as multi-dimensional hazards. They threaten human life, but also disrupt livelihoods, industry, agriculture, gender equality, and critical services such as education and healthcare.

These cascading risks can reverberate across sectors, geographies, and societies – tsunami readiness needs to include assessments and ways to address these knock-on effects.

Access to high quality, readily available information is key to reducing gaps in national mechanisms and local preparedness, and to enhancing awareness about early warning systems.

Learn more about the Campaign, and how you can plan your own #GetToHighGround event