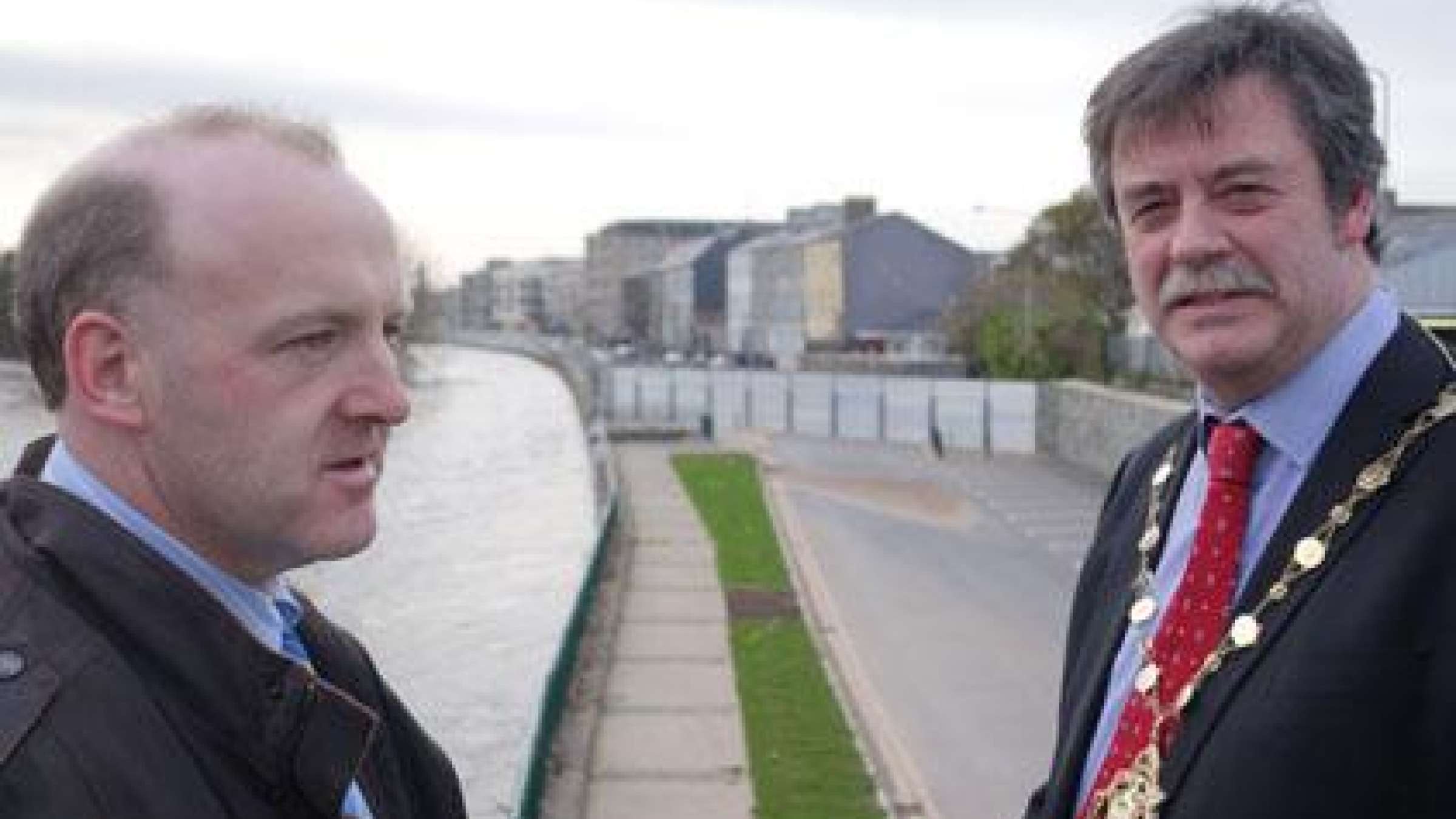 That was in 2009 when the river level rose two metres. This year, the wettest winter on record, no sandbags were distributed. The local school was not forced to close. Business continued as usual just metres from the overflowing River Suir. There was little or no disruption to traffic.

Over the course of eight centuries, the historic town of Clonmel in County Tipperary, has become synonymous with flooding but this winter has seen a startling reversal in its image. It is now being hailed as a poster-child for how to reduce flood risk with smart engineering solutions.

Town manager, Sinead Carr, says: “The benefit of the flood defence works is such that the businesses in the town can now plan for their future without fear and the local community can have peace of mind that their homes and property are now protected. It is a good news story for Clonmel and one which the community in Clonmel hope to build on”

The Mayor of Clonmel, Pat English, took up office at the start of the year knowing that it would be a challenging twelve months particularly as it was likely to include a severe test of the €40 million flood defences which had just been completed in three phases over five years. If it failed, he would have a lot of questions to answer.

“Given the current state of the economy, I don’t think we would get that kind of money today,” he smiles ruefully, “but there is no doubt that we have succeeded in managing the flood risk and the investment has been vindicated. I was speaking to a dentist this afternoon who said that in the past his patients would not have been able to get to his surgery and it would have taken him several days to clean up the premises and this time, it’s business as usual. There are plenty of stories like that around the town.”

Clonmel is spread out along ten kilometers of river. It was established and built on a flood plain and as a result has always been vulnerable to flooding events down through the centuries. It has, notwithstanding its location, grown into a thriving commercial urban settlement but this has resulted in significant damage occurring whenever a flood event occurs.

The flood events have been exacerbated by the fact that it is at the centre of the run-off from three mountain ranges; deforestation has taken place on a large scale, and there has been a reduction in wetlands and overgrazing on the surrounding mountains. The significant amount of development which has occurred and which is attracted by successful urban centres have all added to the intensity of the modern day flood event and the intensity of devastation which such causes.

Borough engineer, Jonathan Cooney, also blames the rise in frequency of flood events over the last 20 years on climate change. “Climate change is making a big difference. The town has flooded on eight occasions over the last twenty years. It can rain constantly for a week at a time. What changed this winter is that for the first time we were not reacting to events but we were going in ahead of events and taking the necessary steps to reduce and eliminate the risk of flooding,” he said.

It’s March and the aluminum de-mountable barriers which were first erected along the river wall on New Year’s Eve are still in place. Walking along the quays with Clonmel’s clerk of works, Hugh Houlihan, it is clear that the only casualty of the flood defence system has been the view but soon that should be restored when the demountable fences are taken down.

They are the most visible sign of the flood defences. There are 2,328 beams and posts erected at 25 locations according to priorities established by the Clonmel Flood Forecasting System which involves the use of 18 river gauges and 29 rain gauges installed throughout the Suir valley catchment. They provide real-time data which is monitored by engineer Jonathan Cooney and his staff.

Ireland’s Office of Public Works has played a crucial role in the design and implementation of the town’s flood defences and continues to work on the flood forecast model to improve its predictive capability and accuracy.

Mr. Houlihan said four practice drills take place throughout the year and this has greatly speeded up the time it takes to put up the aluminum barriers to contain any overflow.

Other features of the town’s flood defences include the specially designed “Dry Bridge” which, as the name suggests, normally has no water running under it. This winter however it has seen torrents of water surging through and the sides have been dropped to allow water to flow over it as well. Its closure for a short period of time caused only minor disruption to local residents who are delighted that their homes and property are no longer vulnerable to flooding on the scale of years past.

The defences also include 12 pumping stations and a system of raised embankments and strategically built walls to contain the river to its existing course and the undeveloped floodplain. It is designed to protect the Borough’s 18,500 people from a 1 in 100 year event i.e. a flood that has a 1% chance of occurring in any given year. Currently the return on investment is conservatively estimated at savings of Euros 180 million in economic losses over 100 years in a town where it is currently impossible to buy flood insurance.

The foundations for the walls and embankments have been designed so that the defences can be raised in the future to protect from a 20% increase in the current design flow of 500 tonnes of water per second. To put that in perspective, during a flood event ten years ago the estimated flow was 355 tonnes with a return period of 11.4 years, according to a report by Regional Engineer, Cian O Donaill.

However, it has to be said that all of this good work will not save the post of Mayor of Clonmel. Despite it’s illustrious history over eight centuries, local government reforms mean that the post will be abolished this year. However, the last Mayor of Clonmel, Pat English, will be forever associated with this historic first in flood management for the town.