Fifth Anniversary of the Sendai Framework: Progress and Challenges in Unison in the Americas and the Caribbean 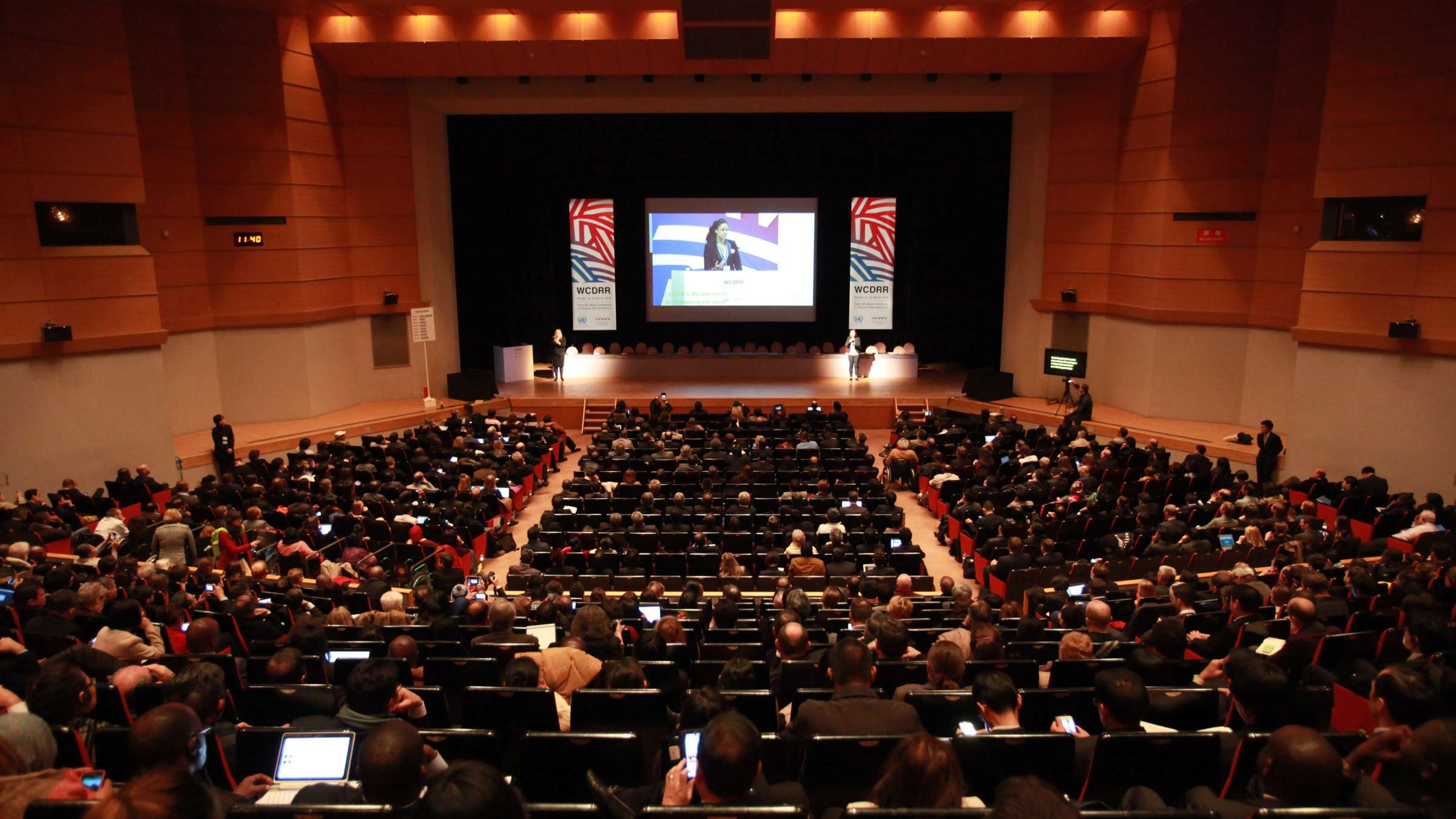 PANAMA CITY, Panama, March 18, 2020 – Those seated at the main table expressed joy and satisfaction on a cool midday in Sendai, Japan, when 187 member countries of the United Nations came together to adopt a new guiding framework for disaster risk reduction. Upon signing, these states ratified a commitment to create public policies to reduce and prevent disasters in partnership with the private sector.

Today marks five years since most of the world adopted the Sendai Framework for Disaster Risk Reduction (2015-2030) as the guiding document in their decision-making on disaster reduction.

"The Sendai Framework succeeded in establishing an important conceptual change: it introduces the international community to identification of risk reduction as the central concern, shifting the focus  away from disaster reaction," explains Raúl Salazar, head of the United Nations Office for Disaster Risk Reduction, Regional Office - The Americas and the Caribbean (UNDRR).

Salazar adds that “this change in approach helps to establish the perception of disaster risk as a development-related issue so that the decisions made do not generate new risks.”

“The Hyogo Framework for Action was born in 2005 during the decade of prevention. At that time, countries noted the increasing impact of disasters, which led to a return to poverty. Hyogo was not a commitment but rather allowed for a reflection on the comprehensive theme of scientific knowledge to contemplate disaster-causing phenomena and integrate it into the social sciences. It goes beyond studying why an earthquake or a hurricane occurs to understanding them not as isolated events but rather as mediating the human context,” Salazar explains.

The comprehensiveness with which the Sendai Framework presented risk management in turn opened a new portal for understanding possibilities of risk. That is, it exposed risk not only as a consequence of an event (natural or human) but also invited consideration of all the effects produced by an extraordinary situation in a chain of events. Simply stated: systemic risk.

Understanding this 'complex' risk, says analyst Allan Lavell, has been one of the main challenges of the Sendai Framework in the region. “Successfully differentiating the components of exposure and threat vulnerability has taken years. And it has yet to be explored as thoroughly as it should. The concept of systemic risk escapes many officials and planners,” he says.

Notwithstanding, there are cases that, in contrast, have developed an induction method towards understanding risk from the root of knowledge itself. “The Safe Schools initiative - which integrates various sectors: education, infrastructure, economy, finance, civil protection - improves the preparation of students to understand disasters from an early age. Conceptually, the Sendai Framework has contributed greatly to this reflection on the integration of risk reduction,” Salazar says.

The adoption of the Sendai Framework, in addition, has made it possible to understand risk management as a comprehensive front, combining public, private and civil society. “Civil society, understood as a group of diverse actors including scientists, communities, women and people with disabilities, really contributes towards the implementation of the Sendai Framework, because they are ultimately those who have a direct link with the community,” Salazar says.

On the other hand, private initiative has also been very important in the adoption of the Sendai Framework. ARISE, the Private Sector Alliance for Disaster Resilient Societies, has significantly contributed to understanding and reducing risk, Salazar says.

The importance of these three sectors working together, Salazar continues, is the key to reducing devastating consequences: $520 billion in annual losses and more than 26 million people cycling into poverty each year, according to the study “Economic losses, poverty & disasters”, published in 2017 by UNDRR and the Centre for Research on Epidemiological Disasters (CRED).

On its fifth anniversary, one of the Sendai Framework’s most important targets comes to an end - Target E: Significantly increase the number of countries with national and local disaster risk reduction strategies by 2020.

“The efforts in these five years appear to have been disparate in the region. Countries have tried to interpret the meaning of disaster risk reduction in the development context from their perspective to find paths towards implementation. Those efforts have crystallized into norms, institutional changes, various efforts towards understanding risk and capacity building. From the institutional perspective, some have moved towards comprehensive systems that have also changed their names and have made progress. But in most cases it has not been possible to get out of the emergency sphere,” says Lavell.

Jennifer Guralnick, in charge of monitoring compliance with the Sendai Framework at the UNDRR Regional Office for the Americas and the Caribbean, affirms that: “countries are complying with the spirit of the Sendai Framework as a country roadmap for their communities and individuals, as a whole and not from the exclusive perspective of a specific sector.”

Guralnick adds that: “intergovernmental organizations, the different United Nations agencies and the international community in general also act as an engine for this substantive and encouraging change, working together to promote its implementation.”

The implementation of the Sendai Framework goes hand in hand with the adoption of two other major initiatives: the Sustainable Development Goals and the Paris Agreements. They are shared goals with common objectives and joint committees for the development and building of strategies. That is, efforts are based on the optimization of knowledge. “It is also a call for coherence, knowledge and integration to extend these realities, as required, in the investment decisions of the countries,” says Salazar.

On its fifth anniversary, the Sendai Framework has been crucial to the considerable and palpable reduction in the consequences of disasters in the region. Several countries in the Americas and the Caribbean have undertaken the development of new strategies and initiatives to reduce their vulnerabilities; this, despite the increased risk from climate change that has increased the possibilities of the occurrence of extraordinary natural phenomenon.

"The Sendai Framework has helped us to understand how to tackle a problem that is complex, to give countries clarity about the risks we face today, which are not the risks of 30 or 40 years ago, but rather more complex risks that need to be handled with a more sophisticated and integrated approach,” says Salazar, who also acknowledges that there are many area for improvement. “We still have to move towards a broader understanding of risk. I believe, however, that we have already moved away from viewing the disaster as the centre of attention, that is, exclusively focusing on the consequences, to considering risk as a broader conceptual framework. It is a point of weakness, but at the same time, we have a great opportunity for future reflection and to better organize ourselves in our approach to risk as a country, as local governments and as a region, handling cases with a higher level of sophistication and integration. For example, Covid-19 is a clear example of a risk that originates from an epidemic and possibly has a systemic impact in many sectors.”

Guralnick adds that “one of the main challenges for monitoring progress in the implementation of the Sendai Framework is the lack of inter-institutional and multisectoral mechanisms for the collection of systematized information.”

Salazar is optimistic about the remaining 10 years of the Sendai Framework. “Capacities are being developed to reduce the economic loss, which is very significant to a region. There have been very important advances towards reducing mortality, for example, with evacuation, protection and new construction systems. And I think we are going to see a region that is moving towards that goal. It is a region that must be supported, but it is on the right track, with very clear leadership that is born of itself. I feel quite positive about the goals that remain to be met in the Sendai Framework.”

This is why those seated at the main table in Sendai, five years ago, were happy and satisfied with the document. They also smiled because of the significance of reaching the agreement in the Japanese city surrounded by Zelkova trees, which for centuries provided wood for the construction of hundreds - if not thousands - of houses and structures. The zelkova, like the Sendai Framework, provide the strong foundation for future strategies.