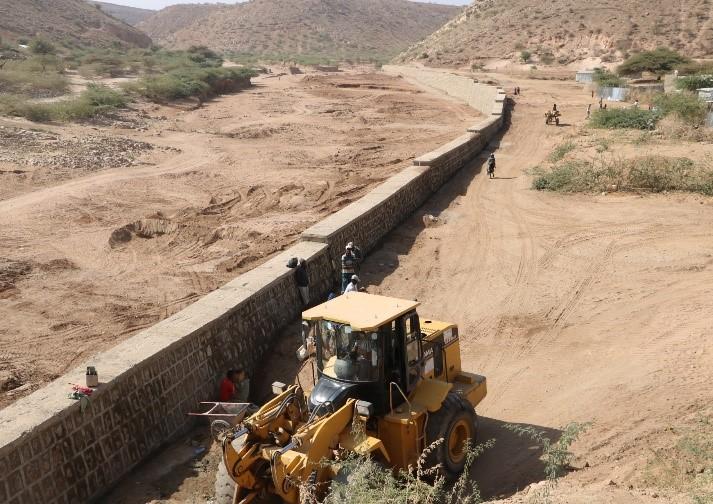 Wendwosen Beri Belete has vivid memories of the night of August 6, 2006 when devastating flash floods swept through his home in the city of Dire Dawa in Eastern Ethiopia. The floods were the worst the city had experienced in 50 years, resulting in the deaths of 256 people.

‘It rained solidly for two hours and the floods took everyone by surprise. In some places the water was as high as four metres. Because it was night time, many people didn’t have a chance to escape to safety’.

Almost 20,000 people were displaced from their homes and flood damages to the city amounted to USD four million.

With a population of 298,000, Dire Dawa is the second largest city in Ethiopia. Located about 500 kilometres east of the nation's capital, Addis Ababa, the city sits 1500 metres above sea-level on the East Ethiopian Plateau, acting as a watershed for the surrounding mountain escarpments. The climate here is semi-arid. Rainfall in the region is extremely erratic and temperatures soar to 38 degrees centigrade.

As the Early Warning & Response Team Leader with the Municipal Disaster Risk Management Coordination office, Wendwosen has had extensive experience in responding to hazards that strike the city, particularly floods and droughts.

‘Most of the municipality is rural. Droughts are worsening due to the increasing variability of rains. Climate change is affecting agricultural productivity and aggravating poverty in these areas,’ he explains.

‘The combination of rising temperatures and a growing population is also contributing to increasing water scarcity. All these factors are fuelling increasing levels of migration to urban areas of the city.’

The impacts of changing weather patterns are being felt in the city’s green zones. Vegetation is dying off due to extreme temperatures and water scarcity.

Wendwosen is the city’s focal point for the ‘Making Cities Sustainable and Resilient’ initiative, a project led by the United Nations Office for Disaster Risk Reduction (UNDRR) and funded by the European Commission. As one of 20 cities around the world to have participated in the project, Dire Dawa now has its own disaster risk reduction (DRR) action plan.

‘Before we developed the action plan our disaster management priorities were largely focused on providing food aid to save lives when disasters struck. Responsibility for disaster management used to be held by the rural development bureau. Now, it sits directly under the Mayor and we are taking more proactive measures to reduce risks and safeguard livelihoods as well’, explains Wendwosen.

One of the top priorities in the action plan is to improve watershed management. Work has begun on the construction of 17 kilometres of retention walls either side of the Dechatu river. The river passes through the city and the retention walls will reduce the threat of flooding by preventing the river from bursting its banks during the rainy season. Work is also underway on terracing and tree-planting on the hillsides surrounding the city in order to prevent soil erosion. Other infrastructure projects include the construction of small dams that capture and conserve valuable rainwater and recharge underground reserves.

Engaging communities in such projects is important to ensure local knowledge and best practise is fully incorporated into disaster mitigation measures. The aim is for one community to transfer their experience by helping people in neighbouring communities who might have similar infrastructure needs.

Wendwosen has put considerable effort into engaging with other sectors in the municipality to ensure that DRR is well understood and embedded in their plans and activities.

‘Before, each department planned in isolation without really assessing disaster risks. One of our priorities has been awareness raising around DRR with different teams across the municipality and with the public. You can really see the changes now.’

The municipality’s agricultural department has recently adopted disaster risk management guidelines and is integrating scientific information and knowledge relating to current and past weather conditions into its outreach activities with rural communities. This includes distributing drought-resistant seed varieties to farmers.

‘Now people don’t attribute a disaster or drought to an act of God, they recognise that these are signs of climate change’, says Wendowsen.

Abdou Mohammed Abamagale, works with the local environment, forestry and climate change authority. He believes that the success of projects focusing on climate change mitigation and adaptation depend upon local politicians and leaders being fully aware of the risk factors.

‘Climate change creates a future full of risk and uncertainty’, he says. ‘There is important indigenous knowledge to capture and when you combine this with scientific knowledge, you can really understand what is happening on the ground. For example, we can learn from the behaviour patterns of nomadic pastoralists to help us predict the intensity of approaching rains. By observing the movement of their herds, we know from which direction there might be flooding.’

Approximately 72,000 people in Dire Dawa are considered to be food insecure and the city’s productive safety net programme is an important component of the DRR action plan. In exchange for cash or food, the municipality gives low-income families employment opportunities by engaging them on public works projects including road construction, drain clearance and land conservation works.

‘We identify the poorest of the poor. In urban areas people are paid in cash but in rural areas food grain is more useful’, explains Wendwosen. ‘Part of the strategy behind this programme is not just to improve food security but prevent the migration of rural populations to the city. Without this support some may resort to selling important assets that they depend on, such as livestock’, explains Wendowsen.

According to Wendowsen, the Making Cities Sustainable and Resilient initiative has helped the authorities in Dire Dawa to embed disaster resilience at the community, societal and institutional levels.

‘Every year the increased investment we are making in disaster risk reduction is not only helping to reduce the loss of life, property and livelihoods - it is bringing greater sustainability to our development activities.’