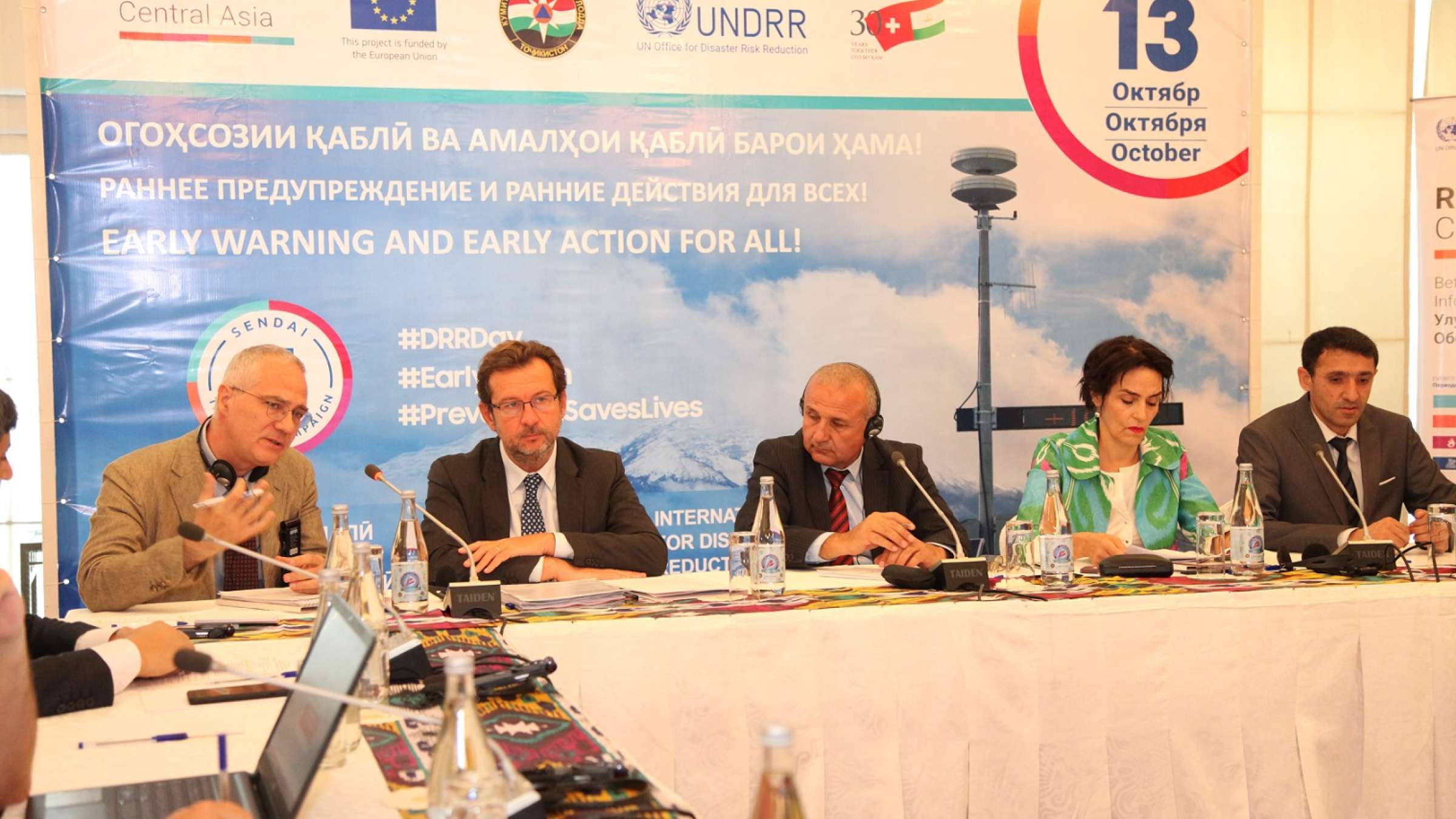 DUSHANBE, 4 October 2022 – A workshop for young scientists was held today on the topic of “Early warning and early action for all” as part of activities to mark the upcoming International Day for Disaster Risk Reduction (IDDRR), which is celebrated globally on 13 October.

As part of the European Union-funded “Strengthening disaster resilience and accelerating implementation of Sendai Framework for Disaster Risk Reduction in Central Asia” initiative, the workshop was co-organized by the Committee for Emergency Situations and Civil Defense of the Government of Tajikistan (CoESCD), the United Nations Office for Disaster Risk Reduction (UNDRR), and the Government of Switzerland.

In 2016, the UN Secretary-General launched “The Sendai Seven Campaign” to promote each of the seven targets of the Sendai Framework for Disaster Risk Reduction over seven years. In 2022, the International Day focuses on Target G of the Sendai Framework: “Substantially increase the availability of and access to multi-hazard early warning systems and disaster risk information and assessments to people by 2030.”

The National Strategy for Disaster Risk Reduction of Tajikistan, which was developed with the technical support from the UNDRR, stresses the importance of building an appropriate scientific base for disaster risk reduction, involving the capacities of research institutions and international organizations.

The workshop aimed to raise awareness of academia and the scientific community about disaster risk reduction, climate change adaptation and the importance of early warning systems in facilitating early actions for saving lives. A total number of 35 participants representing CoESCD, the Ministry of Education, the Expert Group of the National Platform for Disaster Risk Reduction, the Academy of Science, other research institutes, international partners, and the media took part in the workshop.

H.E. Mr. Hotamsho Latifzoda, the First Deputy Chairman of CoES, mentioned: "We believe that the young scientists gathered here today will support our initiatives aimed at reducing disaster risks and continue to contribute to our National strategy on disaster risk reduction."

Mr. Giuseppe Aristei, Programme Manager, EU Delegation to Tajikistan, stressed: "This meeting with the young scientists present that they can mobilise such aspects as innovation, science, communication skills and interdisciplinary approach in their work. They will be the ones who will build better early warning systems and improve prediction models and create saver communities. The European Union have always supported the endeavors of young people and we look forward to see how the young scientists of Tajikistan contribute to the global agendas."

Ms. Salome Steib, Director, the Swiss Cooperation Office highlighted: “Switzerland will undoubtedly continue to promote and contribute to sustainable development in the field of Disaster Risk Reduction in the country. Tajikistan’s future will heavily depend on young scientists, therefore Switzerland empowers Young Scientists, particularly women, and will make sure the respect for their rights, without leaving no one behind.”

Mr. Octavian Bivol, Chief, UNDRR Regional Office for Europe and Central Asia, said: “The development of effective risk communication and early warning systems must entail engagement between scientists, policymakers and at-risk communities.” He further stressed: “Events like this workshop are critical for empowering the next generation of Scientists and strengthening the science-policy nexus.”

The United Nations General Assembly has designated 13 October as the IDDRR to promote a global culture of disaster risk reduction. It is an opportunity to acknowledge the progress being made toward reducing disaster risk and losses in lives, livelihoods and health in line with the Sendai Framework for Disaster Risk Reduction 2015-2030 adopted at the Third UN World Conference on Disaster Risk Reduction in Japan in March 2015.

The Sendai Framework has seven global targets and 38 indicators for measuring progress on reducing disaster risk and losses. These indicators align the implementation of the Sendai Framework with the Paris Agreement on climate change towards the achievement of the Sustainable Development Goals.

In 2016, the UN Secretary-General launched “The Sendai Seven Campaign” to promote each of the seven targets over seven years. In 2022, the International Day will focus on Target G of the Sendai Framework: “Substantially increase the availability of and access to multi-hazard early warning systems and disaster risk information and assessments to people by 2030.”

To raise awareness and mobilize action around these calls, the United Nations Office for Disaster Risk Reduction (UNDRR) is using the 2022 IDDRR, to call for greater investment in expanding early warning and early action for all.

People-centered early warning and preparedness systems can enable early action to minimise damage to people, property and livelihoods. Early warning systems should ensure that populations and sectors at risk can receive a warning, understand it and, most importantly, take action. Hence, early warning should initiate early action that is well prepared and tested.

This year the Swiss Cooperation Office in Tajikistan marks 30th year of the establishment of diplomatic relations between Switzerland and Tajikistan. Over the last 30 years, around 500 million USD have been allocated in the form of grants to the Government of Tajikistan and the Tajik population.  Within its Cooperation program for Central Asia (2022-2025), Switzerland will focus on supporting economic, social and democratic development, promoting an integrated and regional approach in the complex field of transboundary water management, strengthening economic ties and promoting good governance.  For more info: www.eda.admin.ch/tajikistan