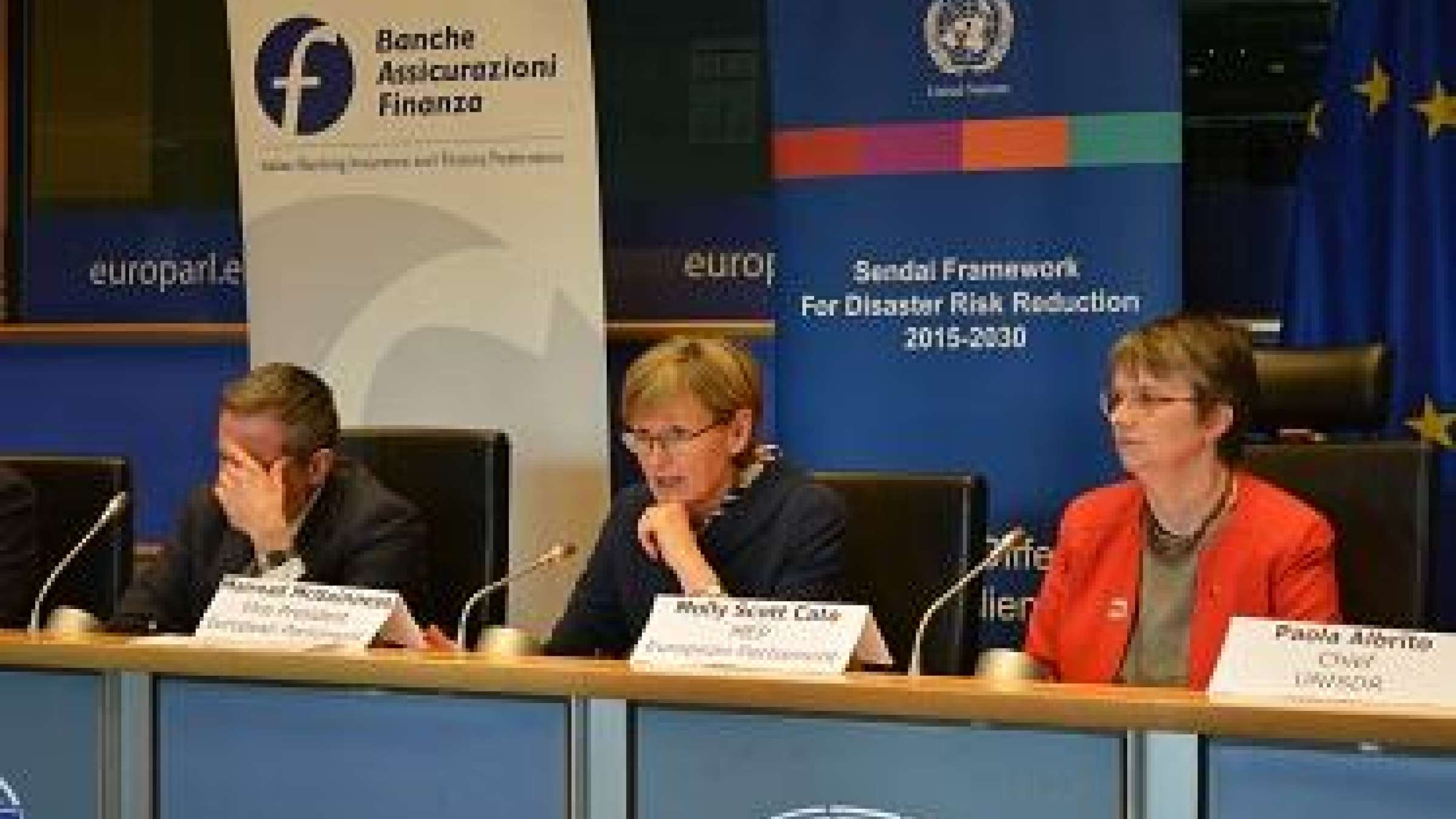 Mairead McGuinness, Vice-President of the European Parliament, speaking on resilience to disasters and sustainable finance

Brussels, 6 March 2018 – Disaster risk reduction is on the agenda as the EU moves towards greater integration of capital markets and a more risk-informed approach to capital investments in a world where disasters are now estimated to cost the global economy US$520 billion annually.

Speaking in a discussion last week, Mairead McGuinness, Vice President of the European Parliament, underlined that “this is really about prevention: being prepared in the future to avoid the worst impacts”.

The event organized by the UN Office of the United Nations for Disaster Risk Reduction (UNISDR) and the Italian Banking Insurance and Finance Federation, (FeBAF) was entitled “Resilience to Disasters, Capital Markets Union, and Sustainable Finance: Leveraging Partnership and Protecting Citizens, European Growth and Jobs.”

Much of the discussion focused on how Europe is vulnerable to disaster risks and concrete solutions to overcome these challenges in the context of the European Commission’s priority initiative on Capital Markets Union and how to include disaster risk in  developments taking place on sustainable finance.

Paola Albrito, Chief of the Regional Office for Europe at UNISDR explained how disaster risk reduction is important for achieving economic growth and sustainable development. She highlighted both the direct and indirect costs of disasters and pointed out that in Europe losses from weather-related events have almost doubled from an average of €7.5 billion in 1980-1989 to an average of €13.3 billion in 2010-2016.

However, there is a positive momentum for change.  “As Europe has increased its awareness of these societal costs, opportunities are being created for enabling a change of gear and a more effective approach to the issues,” stated Paolo Garonna, FeBAF’s Secretary General at the conference.

“This is the case for strengthening Capital Markets Union and financial integration in a changing environment, calling for disaster risk-proofed investments and more sustainable growth,” he added.

Johannes Luchner, Director, Emergency Management, of the Directorate-General for European Civil Protection and Humanitarian Aid Operations (DG-ECHO) added: “We can do better on investing in prevention because it pays off. It can drive innovation, and drive growth and jobs in a long term perspective.”

Constance Kann, Director, International Relations and Public Affairs, European Investment Bank (EIB), detailed how DRR is an important financing area for the EIB and that it is inspired by the global plan for reducing disaster losses, the Sendai Framework for Disaster Risk Reduction 2015-2030 and the Sustainable Development Goals

The importance of public private partnerships was re-iterated across the event, as well as the need to take a multi-stakeholder approach.

The event, hosted by the British Green Party, Member of the European Parliament, Molly Scott Cato, concluded that disaster risk reduction and especially avoiding the creation of future risk is essential to the sustainability of EU finance policy. The European Commission will present a work plan on sustainable finance in the Capital Markets Union on 7 March 2018.