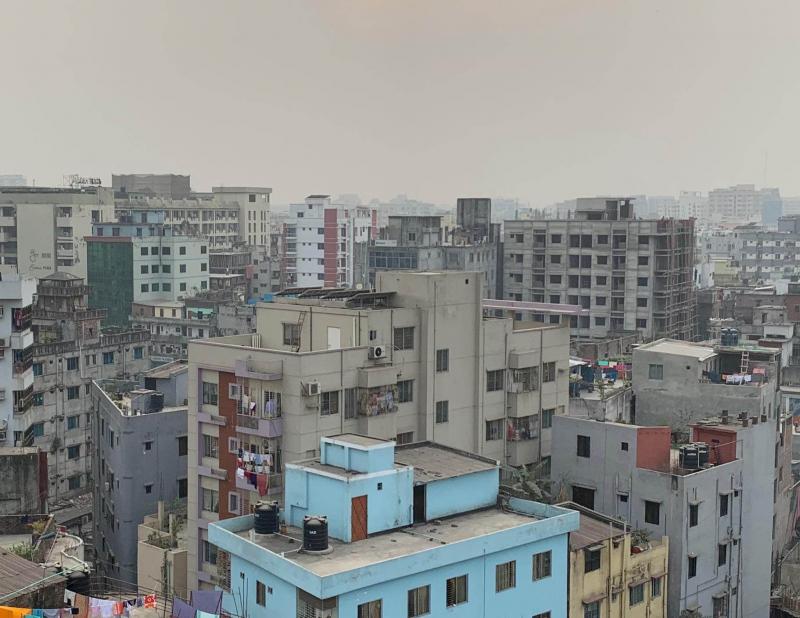 Bangladesh ranks as one of the top ten countries most vulnerable to climate change, as well as being one of the most disaster prone. Almost 80% of the countries’ population is regularly exposed to tropical storms, floods, drought and landslides.

Bangladesh is also vulnerable to earthquakes. The capital Dhaka sits on the Madhupur Fault and an earthquake of magnitude 7.5 could damage over 160,000 buildings and cost the city more than 6,000 million USD in economic losses.

One man leading local efforts in disaster risk reduction (DRR) is Dr. Tariq Bin Yousef who works with the Dhaka North City Corporation (DNCC) heading up its Urban Resilience Programme which is designed to strengthen the cities emergency management, preparedness and response capacities.

‘The threats we face are both natural and man-made’, explains Dr. Yousef. ‘Urban flooding is the most common threat but house fires in the slum areas are also a major hazard. Then there are the impacts of global warming. Winters are getting shorter and temperatures are escalating in the summer’.

Dr. Tariq is the focal point for the ‘Making Cities Sustainable and Resilient’ project, a European Commission funded initiative, jointly led by the UN Office for Disaster Risk Reduction (UNDRR). Under the project, UNDRR is working with 20 cities around the world, helping them to develop local DRR action plans in line with the goals of the Sendai Framework for Disaster Risk Reduction 2015-2030.

Together with participants drawn from different departments within the DNCC, Dr. Tariq recently led a process devised by UNDRR, to measure the cities levels of disaster resilience and develop a DRR action plan for Dhaka North municipality.

‘The process was a useful reality check that helped us to see things more clearly and improve inter-departmental working relationships’, explains Dr. Tariq. ‘Some problems cannot be solved by one agency because they are transboundary, they cut across geographical borders and areas of responsibility. The pollution in our rivers for example, can’t be addressed by the Municipal Corporation alone, we need a multi-stakeholder approach that involves other municipalities, the water and waste management authorities and private industries upstream who discharge effluent into the river system’.

Issues around effective governance also arose. ‘We recognised how the different mandates of government agencies can sometimes prove to be a challenge’, says Dr. Tariq. ‘Coordination at the working level between the National Disaster Management Council and different agencies may be good, but there can be duplication or a lack of clarity in responsibilities amongst agencies. This often relates to governance at the top of an organisation’.

‘We also learned that when you are developing a city-wide DRR plan, it’s important to understand what is workable and realistic. Small-scale initiatives led by the community or NGO’s may work well in a localized setting, but scaling them up city-wide isn’t straightforward. There are budgetary challenges and problems linked to the differing capacities and mandates of different government agencies’, explains Dr. Tariq.

The planning process highlighted the importance of social connectivity and the value of investing in community based DRR initiatives.

‘One of our main priorities is to prepare the population for disasters by building their knowledge, understanding and capacity at the community level’, explains Md. Mesbahul Islam, CEO of the DNCC. ‘This process has helped to align government initiatives in disaster management with those of NGOs, international organisations, community-based organisations and volunteers.’

Under Dhaka North’s DRR action plan a number of new initiatives involving local communities will help safeguard the cities critical ecosystems. By June 2020, the DNCC aims to have community awareness programmes and waste management schemes in place to reduce pollution in the cities’ rivers. Plans are also underway to develop and restore green spaces such as parks and playgrounds that regenerate communities, improve air-quality and help to reduce the impacts of seasonal flooding.

Dhaka is the most densely populated city in the world with 44,000 people per square kilometre. The city is largely unplanned and urban migration has meant that over two million people now live in almost 14,000 slums around the city. The risk of fires in the slums is high. Since 2010 over 4,500 houses have been destroyed by fires which cause over 2.5 million in damages every year.

Fatima Meherunnessa is a project manager on the urban slum fire readiness project run by the NGO World Vision, who are stakeholders in Dhaka North’s DRR plan.

‘Because of Dhaka’s traffic congestion fire-fighters often cannot respond on time. Our project uses an innovative system of radio-networked heat-sensing fire detectors to provide fire warnings. We are training community fire response teams and are carrying out the first feasibility study on micro-insurance to mitigate the financial risks associated with slum fires’.

‘We realised that we need to do more to strengthen the financial capacity of communities as part of our community-based disaster resilience activities. Developing our knowledge of micro-insurance and initiating dialogue with insurance companies around fire insurance is now built into our DRR plan’, explains Dr. Tariq.

While the DRR planning process brought a new level of understanding and commitment towards working together on common priorities. Dr. Tariq admits that collaboration in some sectors remains lacking.

‘Untapped potential exists within the private sector. We need to develop a business model that helps the private sector move beyond Corporate Social responsibility (CSR) and recognise the value of investing in DRR’.

Plans are underway to approach the Federation of Bangladesh Chambers of Commerce and Industries (FBCCI) to look at what incentives could be offered to the private sector to engage them in the cities DRR plan.

‘In a big disaster we will need to mobilize resources, equipment and personnel from the private sector. We are aiming to establish MoU’s and partnership agreements to build these relationships,’ says Dr. Tariq.

‘If there is a big earthquake tomorrow, we would be very vulnerable as there would be hundreds of leaks in the gas supply network’, explains Dr. Tariq. ‘We will be developing an investment proposal to replace our existing piped gas system with a seismic resistant system that has an auto-shutdown capability’.

Plans are also in place to retrofit critical buildings such as government and private hospitals and an interoperable communication system will be developed for emergency response that links 13 different government agencies.

Participating in the ‘Making Cities Sustainable and Resilient Project’ has inspired Dr. Tariq to share the learnings from the project with other cities in Bangladesh. In March, he is planning a DRR workshop with a number of municipal authorities from other cities to share the experiences of DNCC and also offer them technical support with their own DRR planning processes.