Disasters are "greatest threats to our national security" 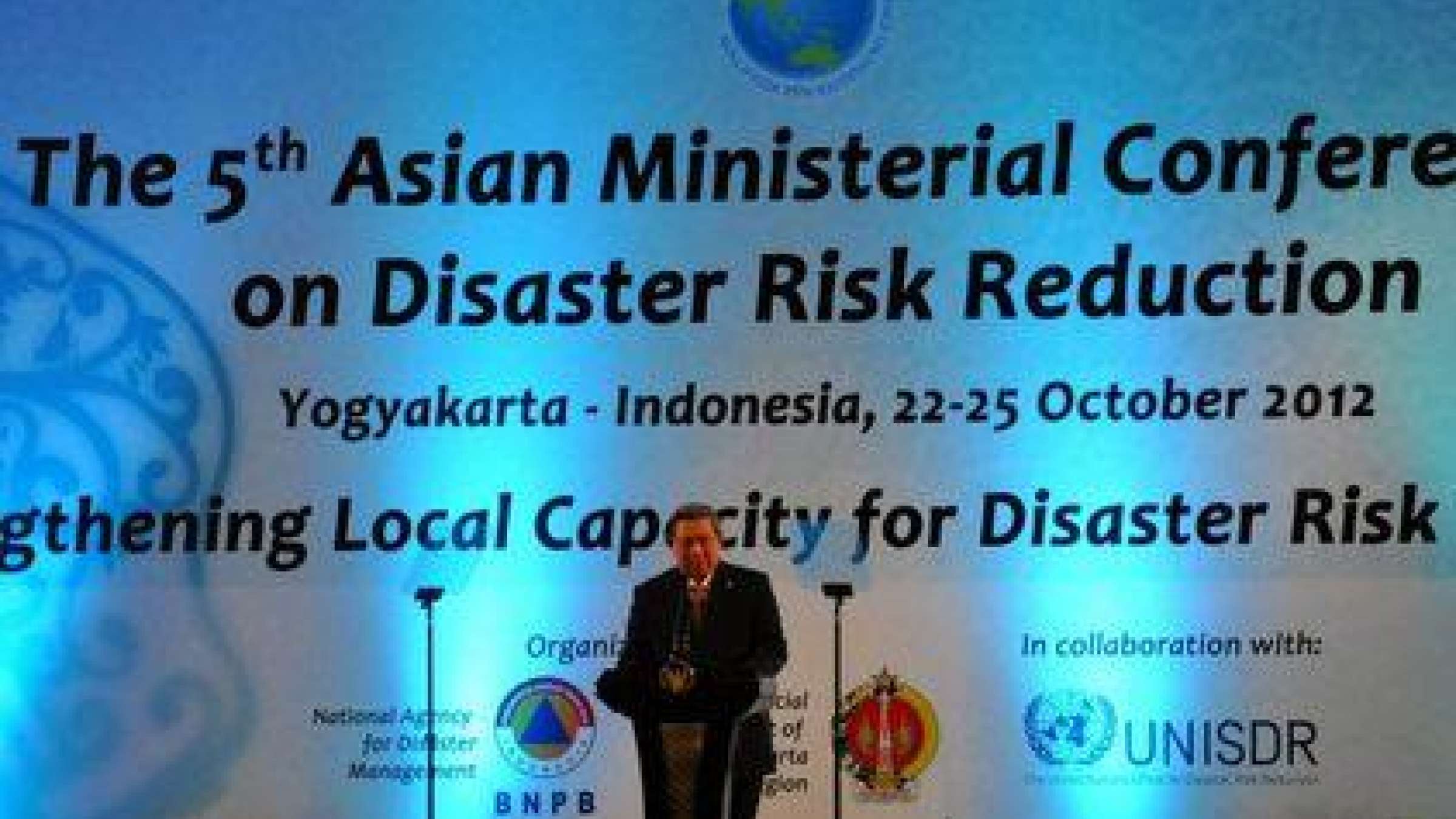 GENEVA, 29 October 2012 - The President of the Republic of Indonesia, Dr. Susilo Bambang Yudhoyono, made a keynote address to last week's 5th Asian Ministerial Conference on Disaster Risk Reduction, in which he explained why his administration has made "disaster reduction our top national priority." He said: "natural disasters in all its forms -- tsunamis, earthquakes, forest fires, floods, landslides, volcanic eruptions -- have been the greatest threats to our national security and public well-being. They have caused more damages to property and to citizens' lives than any other factors." His full speech is below and also available online.

I am delighted to welcome all of you to Yogyakarta--a city that is rich in culture and history.

Indonesia is proud to host this year''s Asian Ministerial Conference for Disaster Risk Reduction. It is rather unfortunate that we in Indonesia live in an environment quite prone to natural disasters. In my administration, especially since the tsunami tragedy of 2004, I have made disaster reduction our top national priority. And we were not wrong to do so : we have found that natural disasters in all its forms -- tsunamis, earthquakes, forest fires, floods, landslides, volcanic eruptions -- have been the greatest threats to our national security and public well-being. They have caused more damages to property and to citizens' lives than any other factors.

Disaster reduction, of course, is necessarily a national as well as local undertaking. In almost all disasters, local governments always need help. Their state of readiness determines the extent to which potential casualties can be minimized. The theme for this conference: "Strengthening Local Capacity for Disaster Risk Reductions" is thus entirely relevant.

Yogyakarta, for example, is under constant threat of volcanic eruption. This great city was hit by an earthquake in May 2006--claiming more than 5,000 lives, and damaging more than 150,000 houses. Now that Yogyakarta is fully rehabilitated from that earthquake, is a testament to its remarkable resilience.

Like the countries and organizations represented here today, we have benefited much from the Hyogo Framework for Action 2005 -- 2015. This Framework has served as a main point of reference in devising our National Plan of Action on Disaster Risk Reduction (DRR), including its programs.

In the course of implementing the Framework and the Plan of Action, we have taken a number of measures to promote DRR.

We have made DRR a priority in our disaster management strategy. In this strategy, we include schemes to enhance resilience and partnerships at the national, regional and global levels.

We have also revitalized our institutional capacity by establishing the National Agency for Disaster Management (BNPB) in 2008. At the provincial and district levels, we established the Local Disaster Management Agency (BPBD). In addition, we also initiated DRR forums and platforms at the national and local levels.

To avoid complications on the ground, successful DRR efforts will also need solid legal foundation. In the case of Indonesia, the Government, in collaboration with the Parliament, has produced Law No. 24 on Disaster Management in 2007. Coherence and coordination in the implementation of this Law is critically important. Hence, I am glad that relevant ministries and local governments have issued a number of implementing regulations.

In many instances, no country can do its DRR efforts alone. Therefore, Indonesia has actively promoted bilateral, regional and international partnerships to build up its DRR capacity.

Bilaterally, Indonesia has developed partnerships with a number of countries. These include Australia-Indonesia Facility for Disaster Reduction (AIFDR).

At the international level, Indonesia works closely with the United Nations Office for Disaster Risk Reduction, in particular in realizing the Hyogo Framework for Action.

Indeed, DRR is essential to sustainable development. It helps save and preserve the achievements of our development efforts. It helps mitigate the destructive effects of natural disasters on physical materials as well as social and economic infrastructures. This is the reason behind my Government's decision to integrate DRR into our Mid-term National Development Plan 2010 -- 2014.

DRR is also critical to our efforts in realizing the vision: "Towards Indonesia''s Resilience to Disaster". The threat of natural disasters in Indonesia is real and frequent. This is because, as you all are aware, Indonesia sits between the world''s most active seismic and tectonic regions -- the Pacific ''Ring of Fire'' and the Alpide Belt. Thus, we are situated in one of the most volatile regions in the world.

Indeed, today, according to the World Disaster Report 2012, more than one hundred local areas throughout Asia are exposed to natural disasters.

Therefore, it is important that we strengthen their capacity for DRR.

And this is the reason why my Government placed local capacity building a top priority. Through our national agency, we have developed an Indonesia Disaster Risk Index (IDRI). We developed an inventory of hazards, vulnerabilities, and capacities of all local governments. Out of 494 districts, we identified areas that fall into high, medium, and low risk zones. It is disheartening that 396 districts are situated in high risk zones and they are highly vulnerable to various types of disasters.

There are a number of ways through which we can strengthen local capacity for DRR. Let me highlight a few.

FIRST, we can strengthen local resilience through the development of disaster resilient villages.

In the archipelagic context like Indonesia, natural disasters affect both coastal and inland villages. We therefore adjust our DRR initiatives to the geographic characteristic of our villages: we call these villages "Kampung Siaga" (Prepared Villages) for inland areas and "Desa Pesisir Tangguh" (Resilient Coastal Villages) for coastal areas.

These disaster resilient villages serve the objective of creating community-based DRR at the local level. These villages serve as part of wider networks for the implementation of DRR plans and strategies.

In my opinion, these villages can also serve as a basis for the development of risk management governance at the local level. And in order to be viable, this governance must underline flexibility in the decision-making and the empowerment of communities. It must also include local actors and take into account local values.

This leads me to my SECOND point : the participation of multi-stakeholders is critical to the local capacity for DRR.

DRR is a collective responsibility of governments and the people, both at national and local levels. Therefore, Indonesia has encouraged the participation of all stakeholders to support the strengthening of local capacity. These stake-holders include civil society groups, academia, professionals, parliamentarians, religious leaders, and even business community.

I am glad that representatives from those stakeholders are here among us today. I invite you all to contribute more to the efforts in strengthening the local capacity for DRR.

I also attach particular importance to partnership among stakeholders. That is why, during the World Economic Forum on East Asia Summit in 2011, I launched the Disaster Resource Partnership (DRP) National Network for Indonesia. And on January 27, 2012, my Government, in cooperation with engineering and construction companies, formed a Disaster Management Partnership Network. I am confident that this spirit of collaboration will continue to expand and deepen.

THIRD, human capacity and technical capacity at the local level need to be developed.

Human capacity includes knowledge, expertise, and wisdom. It is important that local communities are aware of the potential dangers posed by natural disasters to their areas. It is important that when the time comes, they will have the necessary courage and skills to respond in the most effective way possible. We need to beef up indigenous knowledge that proves effective in the past, to anticipate natural disasters and mitigate their impacts.

Local communities generally have multiple methods to manage disasters. But their methods can be made even more effective if we incorporate up-to-date ways and best practices in disaster management. We can combine local methods and more developed technical skills to make the local communities more resilient.

The Indonesian government therefore pays great attention to empower our community, and to enhance their technical and organizational capacity. We pursue this objective through dissemination of knowledge, and skill enhancement.

FOURTH, financing is a critical factor in achieving local capacity for DRR.
Local community must have sufficient financing to support its disaster resilience capacity. One of the ways to obtain financing support is through public-private partnership in promoting investment in social and physical local infrastructure. Local governments also can establish contingent budget as sustainable reserve.

Another potential sources for funding are philanthropic organizations. The world is never finite with people who have abundant interests in lessening the burden of victims of natural disasters. Accordingly, we should embrace them in order to support DRR financing.

This coherence is important because, in my view, resilience at the national level and that at the local level are mutually reinforcing.

If I may use an insight from one reference document of this conference, I would say: like a tree and its roots, the national level is the roots. The community level is the leaves. And the branches represent the administrative levels that connect it all together.

To support the implementation of DRR and CCA programs at the local level, funding mechanisms can be established at the national level. In my view, well-funded local programs are critical to target the most vulnerable.

Ladies and Gentlemen,
The six points that I have highlighted earlier have been developed based on our experiences to advance capacities, particularly post-tsunami Aceh in 2004. Whether we are ready or not; and whether we are successful or not; our capacities in responding to disasters will be determined by those six factors.

Indeed, and to be frank, those six factors are not as easily achieved as we would hope for. Much more must be done. And it is a continued process of improvement. Within the past eight years, my government has tried our best to develop our readiness, capacity, infrastructure, and management in DRR.

There is a wide range of capacity improvement in various parts of Indonesia relevant with those six factors. Some areas are more ready and they have achieved sufficient capacity, should disasters strike. But some others still need extra efforts.

In the meantime, we must bear in mind the high level of vulnerability to disasters in many parts of Indonesia. We must also bear in mind the width of coastal and inland areas of the country, and the many islands that we have. Hence, today Indonesia is left with no other options but to continue upgrading our capacity. Our ultimate goal is to ensure that Indonesia is better equipped and more ready in the wake of any natural disasters.

Ladies and Gentlemen,
Before I conclude, let me touch on the issue of DRR from the perspective of the post-2015 development agenda.

As you might all be aware, I have been tasked by UN Secretary-General Ban Ki-moon, together with President Ellen Johnson-Sirleaf of Liberia and Prime Minister David Cameron of the United Kingdom, to Co-Chair the UN High-Level Panel of Eminent Persons on the Post-2015 Development Agenda.

The Panel has met in New York in September 2012, and we will meet again in London next month.

Indonesia has made a strong commitment to ensure that the post-2015 development agenda takes into account the natural disaster dimension.

I also recognize that the Hyogo Framework for Action will end in 2015. I am glad that consultative process towards post-2015 Hyogo is on the way. In this regard, I hope this Conference could also contribute to this process, and to the post-2015 DRR agenda.

I am glad to learn that the Conference will produce the Yogyakarta Declaration. I hope this document will guide us in our efforts to further enhance local capacity for DRR in the future.

As a final note, I am fully aware that discussing disasters are surely stressful and highly demanding. I, therefore, urge you to relieve your tension by exploring the ancient city of Yogyakarta. And of course, after the Conference.

And now, by saying, Bismillahirrahmanirrahim, I declare the 5th Asian Ministerial Conference for Disaster Risk Reduction officially open. May the outcomes of this Conference bring benefits to all of us.