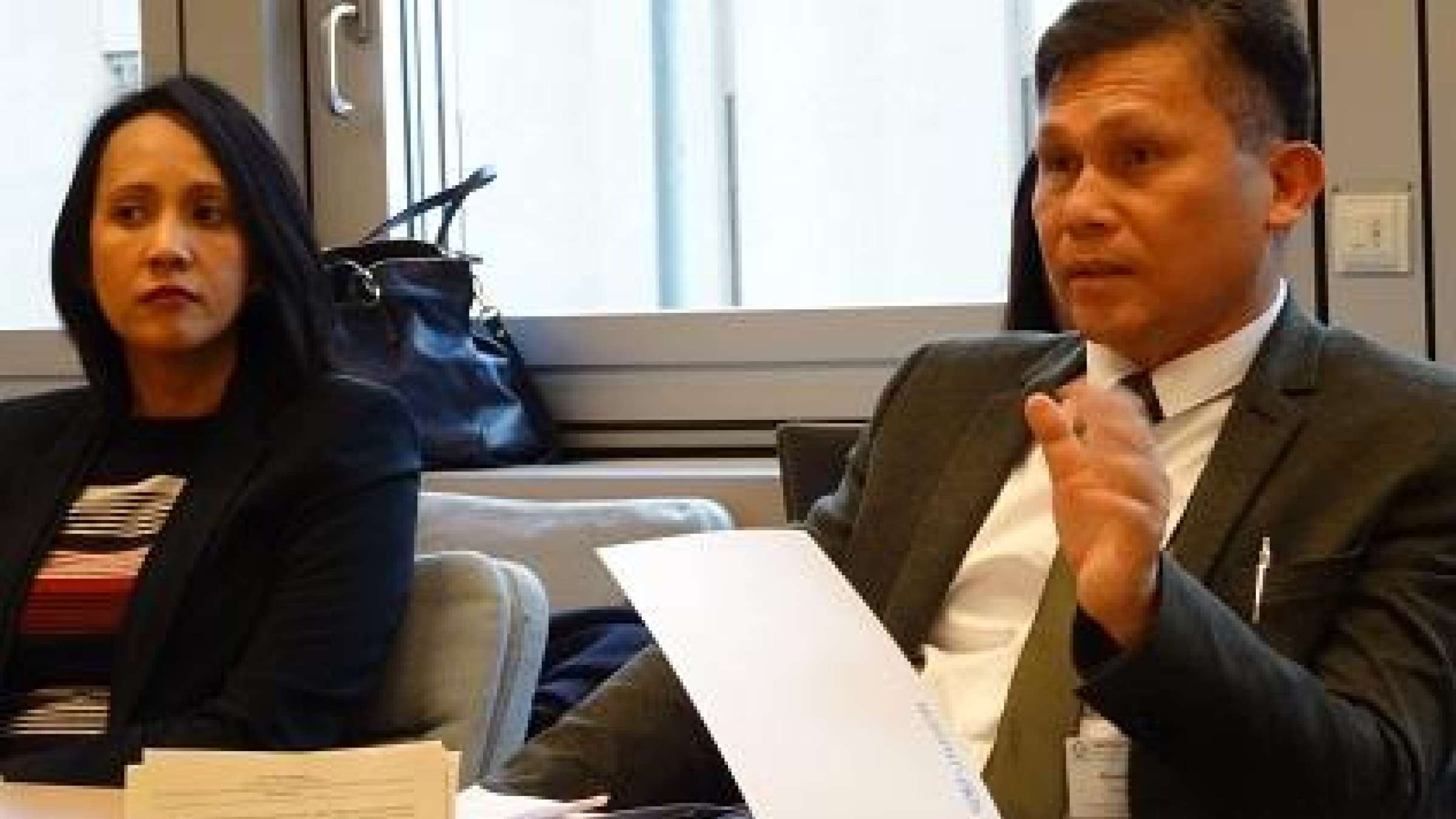 Prevention and mitigation mean there is less need to respond to disasters, says Mr. Ricardo B. Jalad, Executive Director of the National Disaster Risk Reduction and Management Council, pictured here with Ms. Maria Teresa T. Almojuela, Deputy Permanent Representative of the Philippines at the United Nations in Geneva, during their visit to UNISDR (Photo: UNISDR)

GENEVA, 8 February 2017 – The Philippines, one of the most disaster risk-prone nations in the world, is stepping up efforts to ensure that its communities can withstand natural and human-induced hazards.

“If we’re able to reduce risk then there may be no need for response. So the more we focus on prevention and mitigation, the less we might need to respond,” said Mr. Ricardo B. Jalad, Administrator of the Office of Civil Defense and Executive Director of the National Disaster Risk Reduction and Management Council (NDRRMC).

“We’re trying to focus on local government units and communities. That’s our priority,” he said, during a visit to the Geneva headquarters of the UN Office for Disaster Risk Reduction (UNISDR).

“The Philippines is such a key country when it comes to disaster risk reduction. Partly because it is so exposed to hazards, but also because of the way that its learning from those hazards has helped it reduce disaster risk, and because of the lessons it offers for other countries,” said Mr. Glasser.

Last week, the NDRRMC called on local governments in the country’s Eastern Visayas area – also known as Region 8 – to sign up to UNISDR’s Making Cities Resilient campaign at a ceremony planned for 6-7 April.

Home to 4.1 million people, and nicknamed the “geographical backbone” of the Philippines, Eastern Visayas was the location of the worst disaster to affect the country in recent decades.

The November 2013 Typhoon Haiyan – known in the Philippines as Yolanda – killed more than 7,000 people, affected 25 million, and caused US$10 billion in estimated economic losses. In the city of Tacloban alone, one of the areas hardest hit, 90% of all structures were either destroyed or damaged

A major issue exposed by the disaster was the need for early warning terminology to make sense to the general public. Forecasters used the technical term “storm surge”, which describes how the sea is driven inland by a typhoon in a tsunami-like wave, but that label did not grab the population’s attention sufficiently.

In Haiyan’s wake, the Philippines shook up its methods for keeping the public risk-informed, and ensuring early dissemination of warnings and efficient evacuations to promote a “zero casualty” approach. That proved successful in the face of major storms such as Typhoon Hagupit in December 2014 and Typhoon Koppu in October 2015.

“The biggest problem we have now is in the rehabilitation and recovery phase,” he added.

Making Cities Resilient was launched in 2010 to help reduce disaster risk at the local level by sharing good practices from around the globe. It has grown into a global network of more than 3,400 members, ranging from towns to entire provinces, and the numbers are continuing to expand.

Currently, more than 100 provinces, cities and other municipalities in the Philippines

Self-assessment according to a series of benchmarks known as the “Ten Essentials” lies at the heart of the campaign, along with sharing best practice among participating cities. Areas under scrutiny include a city’s budget, how critical infrastructure is handled, policies to ensure all members of the community are included in risk planning, the safety of schools and health facilities, risk-compliant building regulations and land use, protection of ecosystems, and early warning systems.

The country has volunteered to pilot monitoring of implementation of both the Sendai Framework and the Sustainable Development Goals.

“It’s going to be really interesting for the Philippines to demonstrate to other countries how to integrate these two critically important and related priorities,” said Mr. Glasser, noting that the issue would be in the spotlight at the 2017 Global Platform for Disaster Risk Reduction, which takes place in May in Mexico.