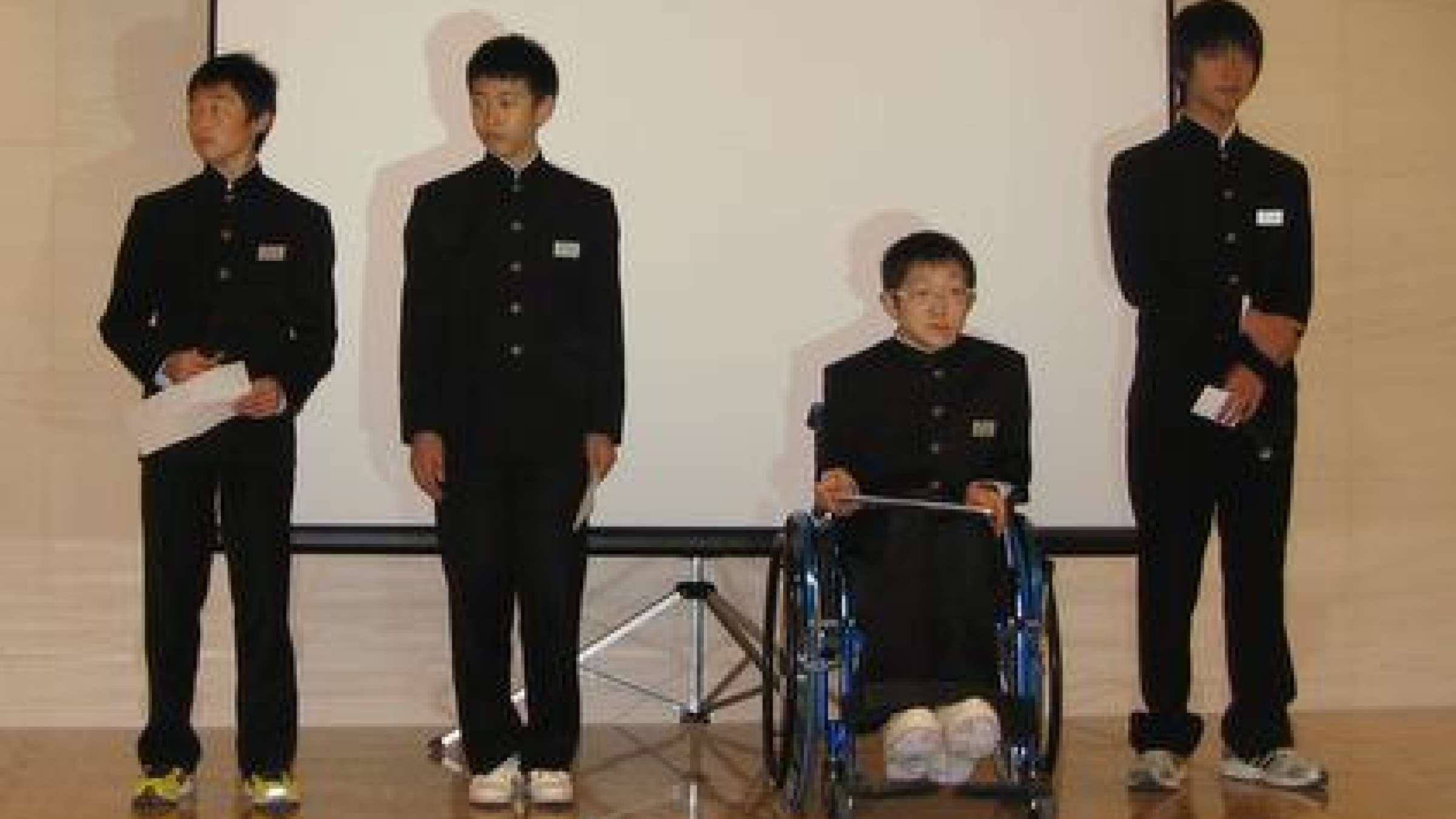 Junior high school student Takuro Suzuki with his three class mates share their experiences and a vision for an inclusive community.

KOBE, 12 November 2013 – Filled with the desire to share his story, a young wheelchair user, together with his three classmates, shared his experience and vision for a more inclusive and safer community for everyone.

“Supporting each other is very important, as I always experienced in my school. I wish that such support will emanate not just in a school, but also throughout a community,” said Mr. Takuro Suzuki who is a third year in a junior high school.

“This would contribute to building an inclusive community where everyone, including persons with disability and elderly, feels comfortable to live safely.”

The boy was speaking at an event on 29 October to mark International Day for Disaster Reduction, which this year focused on the theme ‘Living with Disabilities and Disasters’, in Rikuzentakata city, Iwate Prefecture, Japan.

The event last month was held during the visit of the Chief of the UN Office for Disaster Risk Reduction (UNISDR) Ms. Margareta Wahlström, and was hosted by the UNISDR Office in Kobe in collaboration with the Japan Disability Forum and the Nippon Foundation, as well as Rikuzentakata city.

Two hundred participants attended, including a number of persons with disabilities. After the opening by Mayor of Rikuzentakata City Mr. Futoshi Toba and Mr. Yohei Sasakawa, Chairman of the Nippon Foundation, they watched a documentary “Messages from Life – Doubled Fatality Rate on 3.11 for Persons with Disabilities”, as well as a dialogue for disability-inclusive disaster risk reduction, learning from the experiences of the earthquake and tsunami.

At the end of the event, a report ‘Proposals from people in disaster-affected areas: Toward inclusive communities for all’ was presented.

The document emphasized the importance of inclusion and participation of persons with disabilities in all policies, programmes and activities related to DRR and that all such initiatives should be based upon the principles of the Convention on the Rights of Persons with Disabilities.

“It is crucial to include persons living with disabilities and provide opportunities for them as important members in the community to participate in planning and discussions to advance an inclusive DRR approach,” Ms. Wahlström said.

Results from the ‘Living with Disability and Disaster’ survey from Japanese respondents were highlighted in her speech. The findings revealed several challenges, in particular the invisibility of some disabilities. Measures identified to address these issues include pre-planned and established support systems, with an emphasis on community connections, as well as practical consideration for the needs of persons with disabilities in disasters.

Among Japanese participants the level of personal preparedness (46.2%) and the wish to participate in the DRR process (70.9%) were high, markedly higher than the global response (29% and 50% respectively).

However, a large gap was highlighted between the number of people who wished to participate in preparedness planning and those who actually had the opportunity to do so (20.2%). The global response regarding participation was even lower (14%). This was attributed to a lack of information available. The membership rate of disability-related organizations was high among Japanese participants (73.3%). This represents a possible pathway for facilitating disability-inclusive DRR.

Knowledge and information was a key theme highlighted as priorities for the post-2015 international framework for DRR.

An additional area of concern highlighted was evacuation. More than 23% reported not having someone to assist them, notably higher than globally (13%). The time given for evacuation, the availability and method of a secure evacuation route, as well as accessibility of evacuation centers, were also of concern.

After a chorus with sign language by a group of people living with disabilities, Chairperson of the Management Committee, Japan Disability Forum, who is blind, Mr. Katsunori Fujii, chaired a discussion, in which panelists shared their individual experiences and expressed their support for disability-inclusive disaster risk reduction.

Ms. Yoko Tanaka, Director, Kesen Branch, Iwate Association for the Deaf, who herself is deaf, said: “It is difficult for deaf people to receive important information when a disaster occurs. Establishing welfare evacuation centres is important for people with disabilities.”