A consolidated plan for the community - Ulaanbaatar, Mongolia 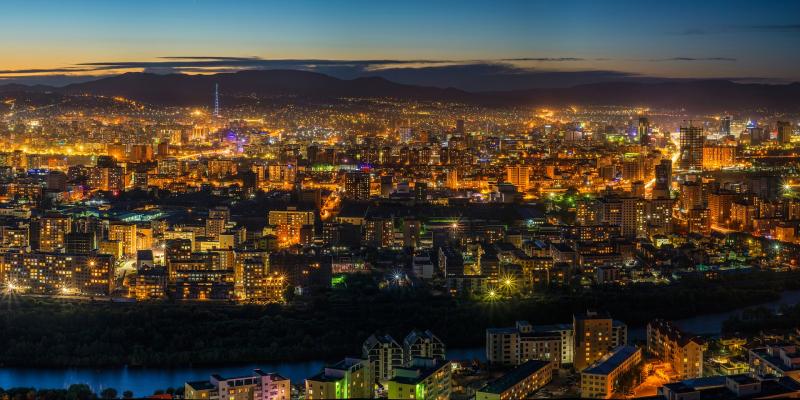 As a senior officer in the Disaster Risk Management Dept of Mongolia’s National Emergency Management Agency (NEMA), one of Lt. Col Bazarragchaa Duudgai’s main priorities is to make disaster risk reduction (DRR) a priority for the 1.4 million people living in the Nation’s capital, Ulaanbaatar.

‘Urban areas are prone to hazardous events, mainly building fires, floods and earthquakes. People might be aware that Ulaanbaatar is vulnerable to earthquakes but for most, allocating money for a risk insurance policy isn’t a high priority’.

NEMA’s Disaster Risk Management Department was only established in 2017, a positive sign that DRR is high on the country’s disaster protection policy agenda. Educating the public is one of NEMA’s main functions and a dedicated facility, funded by the city, now offers city-wide training in DRR.

Ulaanbaatar is among 20 cities around the world participating in the ‘Making Cities Sustainable and Resilient’ initiative, a project funded by the European Commission, with technical support provided by the UN Office for Disaster Risk Reduction (UNDRR). Under the project, UNDRR has helped each city to assess their levels of disaster resilience and develop a DRR action plan - aligning with the goals of the Sendai Framework for Disaster Risk Reduction 2015-2030.

Ulaanbaatar is spread along a valley at the foot of the Bogd Khan Uul mountain. Every year the municipality allocates funds towards the construction of protective infrastructure that safeguards the city from floods caused by seasonal rains or snow melt from the mountain. Construction of a 135-kilometre network of surface drainage is underway together with a 196-kilometre flood protection dam.

The primary threat to the city is from earthquakes. Since 2017 there have been almost 12,000 tremors registered in Mongolia, 320 of which have occurred in the Ulaanbaatar area. Experts predict that if an earthquake of magnitude 6.6 - 7.6 were to strike the city, approximately 22-50% of buildings in the city would be damaged or destroyed and 30-60,000 lives might be lost.

Ulaanbaatar’s DRR plan includes increased levels of investment on reconstructing, retrofitting, certifying and assessing the safety of buildings in the city.

‘The disaster resilience scorecard introduced by UNDRR was very useful for understanding and evaluating the risks and vulnerabilities in the city’, explains Deputy Colonel Batmunkh Chinbat who is responsible for training and prevention in Ulaanbaatar’s Local Emergency Management Agency (LEMA).

‘Involving our planning officers from the districts in the process gave us much deeper insights into the risks faced by local people. Now, we know which districts have a high earthquake risk and we can target our training at communities living in unsafe apartment buildings, making sure they know the exits from their building and where they should evacuate to’.

The municipality has carried out seismic evaluations on apartment blocks, civic buildings and vital infrastructure across the city, including hospitals and schools. Some 234 apartment blocks built in the 50’s and 60’s have been deemed unsafe are now scheduled for demolition. Undertaking a task of this scale has led the municipality to forge public-private partnerships with developers who are demolishing the old apartment blocks and building new ones in their place. Residents are being re-housed in the new blocks and the developers make their profit from the sale of the remaining units. In 2018, 823 households were re-housed in eight new apartment blocks. By the end of 2019 the target is to have 18 blocks completed.

For Ulaanbaatar’s Deputy Mayor, Bayarkhuu Purevee, improving levels of disaster preparedness in the city is vital. Risk-informed urban planning is a major component of the Mayor’s strategy. On January 1, 2018, changes in the city’s construction code came into effect which now stipulate that buildings should be resistant to earthquakes of magnitude 8-9.

‘Seismic tremors are increasing and we are seeing fault lines appearing in the ground. This is a new phenomenon for Ulaanbaatar’, explains Mayor Bayarkhuu. ‘Half the population is probably totally unaware about the disaster risks we face in the city. We need to train our citizens and increase public awareness on disaster management issues. Citizens must be able to protect themselves’.

On April 26, the entire city will be placed on high alert when a mass earthquake simulation exercise takes place. Over three days the municipality will work with the police, military and personnel from NEMA to organise a series of exercises involving the public. These include a mass evacuation drill, search and rescue operations and the opening of a field hospital where emergency first aid will be administered to 3,500 people.

‘We have been working with a number of high-risk districts in Ulaanbaatar to prepare them for the simulation exercise’, explains Mayor Bayarkhuu. ‘We need to be sure that people at management level in the municipality know what their responsibilities are in any emergency and we need to plan around different scenarios involving different response options. In an earthquake, key personnel may need to look after their immediate families so support might have to be enlisted from a neighbouring district’.

Under Ulaanbaatar’s DRR plan, over 100 assembly points in squares, gardens and parks across the city are being identified together with 40 temporary evacuation shelters and evacuation locations outside Ulaanbaatar where camps can be erected if needed. The city is also aiming to install 40 early warning towers which feature integrated communications systems to alert and inform the population.

The city’s earthquake disaster prevention council has started work on a plan to establish an emergency food reserve that ensures the city has sufficient available food stocks to meet the minimum nutritional needs of 100,000 people over a 100-day period. Contracts are in place with a number of private companies who would release supplies of commodities such as milk, rice, water and meat from their warehouses as needed.

Ulaanbaatar is home to half of Mongolia’s population. Each year, thousands migrate to the city from the provinces to seek employment opportunities. Some are traditional nomads who come to the city to settle or to sell their livestock. The high volume of animals, such as sheep, cows and pigs, living within the city limits poses a risk to both animal and human health. Diseases such as foot and mouth, anthrax, plague and rabies are prevalent amongst livestock herds and the city authorities are taking extra precautions to contain them. In 2018, 800 livestock died following 4 outbreaks of foot and mouth disease.

‘Under our disaster risk reduction plan we have secured funding to establish livestock monitoring points in the east and west of the city to check animals entering the city. We are also moving the zones where it is permissible to keep livestock, further from the city to reduce the risks of disease transmission. We began relocating herder families in 2018 and have plans to move around 9,000 animals’.

According to Deputy Mayor Bayarkhuu, the city’s new DRR plan has brought much greater coherence to prevention efforts.

‘Now we are fully aware of the risks in the city and we can properly engage the public on prevention activities. Before, everyone had their own action plan but now we have a consolidated plan and we are able to pay much more attention to delivering awareness activities at the community level’.