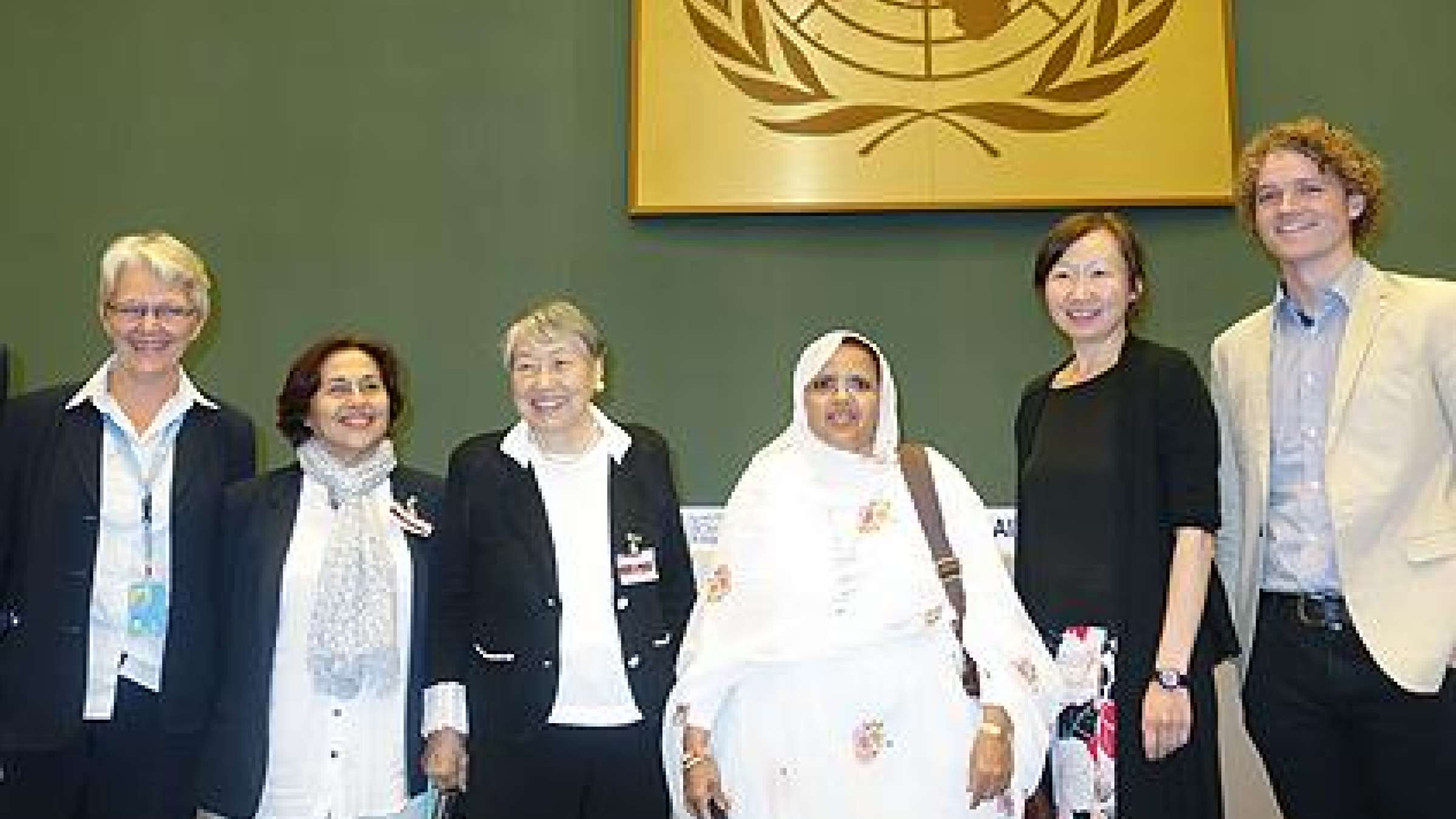 GENEVA, 15 July 2014 - The lack of privacy for women in emergency shelters – managed by men - following the Great East Japan Earthquake and Tsunami was cited today as an example of how gender issues can be overlooked in disaster risk management as civil society took centre stage at preparatory talks in Geneva on the Third UN World Conference on Disaster Risk Reduction scheduled for Sendai, Japan, in March 2015.

“Even worse, women told us they feared being sexually molested which did happen in several cases. This is what happens when women’s needs are not recognized,” said Akiko Domoto, speaking on behalf of the Women’s Major Group on the second day of the Intergovernmental Preparatory Committee meeting.

Japan’s Gender Equality Centers recognized the challenges in the shelters; they coordinated laundry services and supplies that met women’s specific health needs during menses, pregnancy, and breastfeeding. DRR guidelines should already incorporate basic issues related to gender-differentiated needs to avoid the unmet needs from the outset.

Ms. Domoto said: “It is essential that strategies and actions for disaster risk reduction recognize and address gender inequality and also incorporate women’s skills, perspectives and ideas, as well as the wide experience of women’s organizations and associations, to guide robust action.”

The Women’s Group statement emphasized building on the vision of the Hyogo Framework for Action to integrate a gender perspective; it is essential that women are involved in decision-making and planning processes about disaster risk reduction at all levels.

“It is also important that women have access to the resources needed to face disasters since they are among the most vulnerable, in particular due to gender roles and expectations,” she said.

The Post-2015 framework for disaster risk reduction to be adopted at the World Conference
must address the following issues: Women have less access than men to productive resources and opportunities, especially in rural areas. They have less access to information, are more likely to be illiterate, and are put at an increased risk of domestic and sexual violence after disasters.

“These factors are currently under-addressed, and must be corrected to ensure gender equality. This requires that women are involved equally in planning, decision-making, and implementation and review processes at all levels, and that sex-disaggregated data is collected and made available,” she concluded.

The statement on behalf of the Major Group representing children and youth expressed concern at the lack of our inclusion in the Suggested Elements for the Post-2015 Framework for Disaster Risk Reduction. As young people, we are capable of being systematically engaged to advocate, design, lead, promote, identify and demonstrate ways to better reduce disaster risk. We not only commit to action, we are already acting; but need support to continue.

Priority should be given to Involvement of young people as equal partners in all levels of disaster risk reduction because of their unique abilities to network, self-organize and make change using limited resources.

At the end of the implementation of the Post-2015 Framework, the number of children and youth (C&Y) that do not have access to quality services related to health, education, water supply and sanitation, protection and security, will have been reduced by 75%.

Dr. Rudiger Klein, speaking on behalf of the Science and Technology Major Group, said: “Scientific research and practitioner experience have revealed that disasters, sustainable development and poverty are intimately linked.”

The Major Group is calling for an international science advisory mechanism for disaster risk reduction which would focus on issues such as the special needs of least developed countries and small island developing states, evidence-based approaches and education.

Maria Veronica Bastias Gonzalez spoke on behalf of the NGOs Major Group which welcomed calls for a forward-looking, action-orientated post-2015 framework to reduce disaster risk built on the successes, gaps and challenges identified in implementing the Hyogo Framework for Action.

She said the NGO Major Group said “an action-orientated framework must be conflict-sensitive and relevant within areas affected by fragility and insecurity where an estimated one in four people on the planet live, many of whom are the most vulnerable to disasters.”

In closing, Ms. Gonzalez said: “We call on the Preparatory Committee, government and intergovernmental bodies to continue to engage civil society in the drafting process leading up to the WCDRR 2015 to ensure the post-2015 DRR framework fully reflects the richness of perspectives, critical elements and priority actions highlighted in the multi-stakeholder consultation process.”

Galina Angarova, speaking on behalf of the Indigenous Peoples Major Group representing over 370 million people who occupy 20% of global land, said: “We are the guardians of the Mother Earth but we are like no other group are vulnerable to the changing climate conditions and prone to the impacts of disasters… Poverty and marginalization multiplies impacts of disasters on indigenous peoples.”

Ms. Angarova said: “Industrial activity is significantly contributing to the intensity and scope of natural disasters and a major cause for the majority of human-induced disasters.” She added: “We are not against the private sector per se, we are asking for appropriate safeguard systems and participation in decision making and consultation in regards to DRR program financing and implementation.”

Asking for the inclusion of well-formulated targets, she said these targets “translate into provision of financial and material support in preparing for disasters such as hauling materials, stocks of food, camp beds, medicine, gas or an emergency power generators.”

Fatimetou Mint Abdel Malick, Mayor of Tevragh-Zeina, Nouakchott, Mauritania, spoke on behalf of the Local Authorities Major Group. She observed that “Although local governments are at the forefront of reducing risk and managing disasters, HFA progress at the local levels has been lagging behind. Major barriers include insufficient devolution of authorities and resources to local levels and insufficient capacity of local institutions.

She said that “we, local and regional government leaders, recommend that the new disaster risk reduction framework should continue and further strengthen the key role of local authorities by effective decentralization with the principle of active citizen engagement and participation to ensure local risk reduction and resilience.”

Mr David Boys, Utility Officer of Public Services International, in the statement on behalf of the Trade Unions Major Group said: " In disasters, the number of casualties, displaced people,separated families and splintered communities depends largely on the extent to which communities are supported by quality public, sustained and predictable support.

"Strong social protection systems can provide this support,whereas private insurance mechanisms are too fragmented and sparse, intended for individual rather than communities suffering systemic disasters."