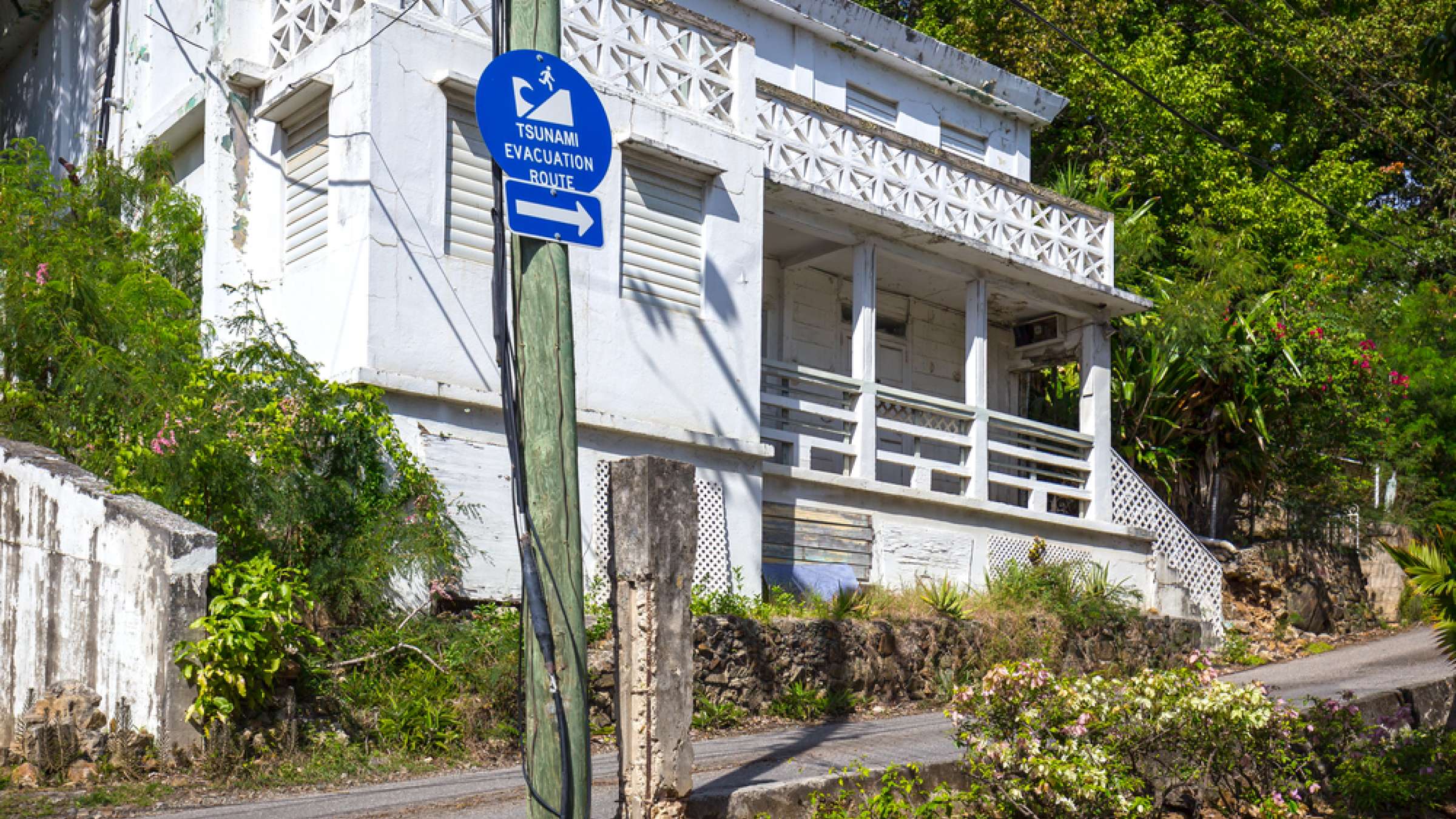 As hotels grab prime seafront land along Barbados’ west coast, the road through Mullins offers an increasingly rare “window to the sea” with unhindered views over the blond beach and shallow Caribbean waters beyond.

But for Kimberley Agard, who chairs the local district emergency organization, it’s this proximity to the sea that puts Mullins at risk of massive damage should a tsunami wave surge across the beach road to destroy homes and businesses.

Now, after the townhall meetings, training and evacuation planning she helped organize, Mullins and the 5 kms stretch north is the first area in Barbados to rank as “Tsunami Ready”, joining 62 communities across the Caribbean from Haiti to Grenada.

“Because Barbados is not an island that has had tsunamis before, it’s not really been in people’s mind as a big risk to us,” says Agard, who works for the Barbados Statistical Service.

“Some people don’t think about things until they are affected by them,”

While tsunamis are not common in the Caribbean – the last major one hit 75 years ago – people in Mullins were well aware of the impact of storm surges and quick to get on board with the “Tsunami Ready” program, she says.

A tall sign on the main highway now instructs motorists and pedestrians to head to higher ground if they feel an earthquake or if the sea level suddenly changes. Others point the way to evacuation routes and assembly points, says Agard.

Tsunami experts say April’s La Soufriere volcanic eruption in St. Vincent and the Grenadines has reinforced the need for Caribbean countries to prepare not just for hurricanes, but also for other less frequent, potentially deadly hazards.

Despite growing recognition of tsunami risks, the COVID-19 pandemic has shaved the amounts available to help countries in the cash-strapped region better protect vulnerable, low-lying coastal areas, they says.

“Funding overall has been deflected more or less to fight COVID and therefore there is a reduction in the terms of the funding available to support tsunami-related initiatives,” says Alison Brome, program officer for coastal hazards at UNESCO’s Intergovernmental Oceanographic Commission.

“Donors are recognizing that there are other hazards that can impact and I think the La Soufriere volcanic eruption has highlighted the multi-hazard needs of the region.”

Ensuring communities are “Tsunami Ready” and take part in the annual Caribe Wave - the world’s biggest tsunami evacuation drill – is core to better protecting the Caribbean which has built much of its critical infrastructure such as airports and schools in coastal areas.

For Raul Salazar, chief of the United Nations Office for Disaster Risk Reduction (UNDRR) – Regional Office for the Americas and the Caribbean, tsunami risk awareness needs to be higher due to the amount of urban and tourism development in vulnerable areas.

“Tsunamis deserve to be a critical part of disaster risk reduction policies and plans given their massive human impact and the toll they take on development,” says Salazar.

“Multi-hazard and integrated disaster risk governance, planning and national plans implementation is the only way to address tsunamis.”

Pressure is now on to ensure all vulnerable Caribbean communities are prepared for tsunamis by 2030, says Christa von Hillebrandt-Andrade, manager of the US National Weather Service’s Caribbean Tsunami Warning Program.

“There’s no country in the Caribbean that can say I’m safe from tsunamis, as that doesn’t exist. When the next tsunami hits, if countries aren’t ready, the devastation could even worse than they’ve seen in hurricanes and earthquakes.”

Alerts on WhatsApp, social media and the CAP.CAP emergency app can warn people of tsunamis as well as hurricanes or floods. If technology is knocked out, church and school bells, police sirens and hotel fire alarms can be used to warn people to run to higher ground, says Brome.

While COVID restrictions meant this year’s Caribe Wave was held virtually, over 400,000 people still took part in the event which gives communities from 48 countries a chance to run through their tsunami evacuation plans.

For Andria Grosvenor, deputy executive director of the Caribbean Disaster Emergency Association, taking a multi-hazard approach is essential to better protecting communities in the region.

In Mullins, Agard is confident people would react quickly if a tsunami hit and says the preparation process may have also better equipped the community to deal with crises such as storms.

“Knowledge is key in making people aware of the disasters or hazards we can experience,” she says.

“We’re praying that nothing happens, but if it does, we’re quite equipped and ready to handle it.”