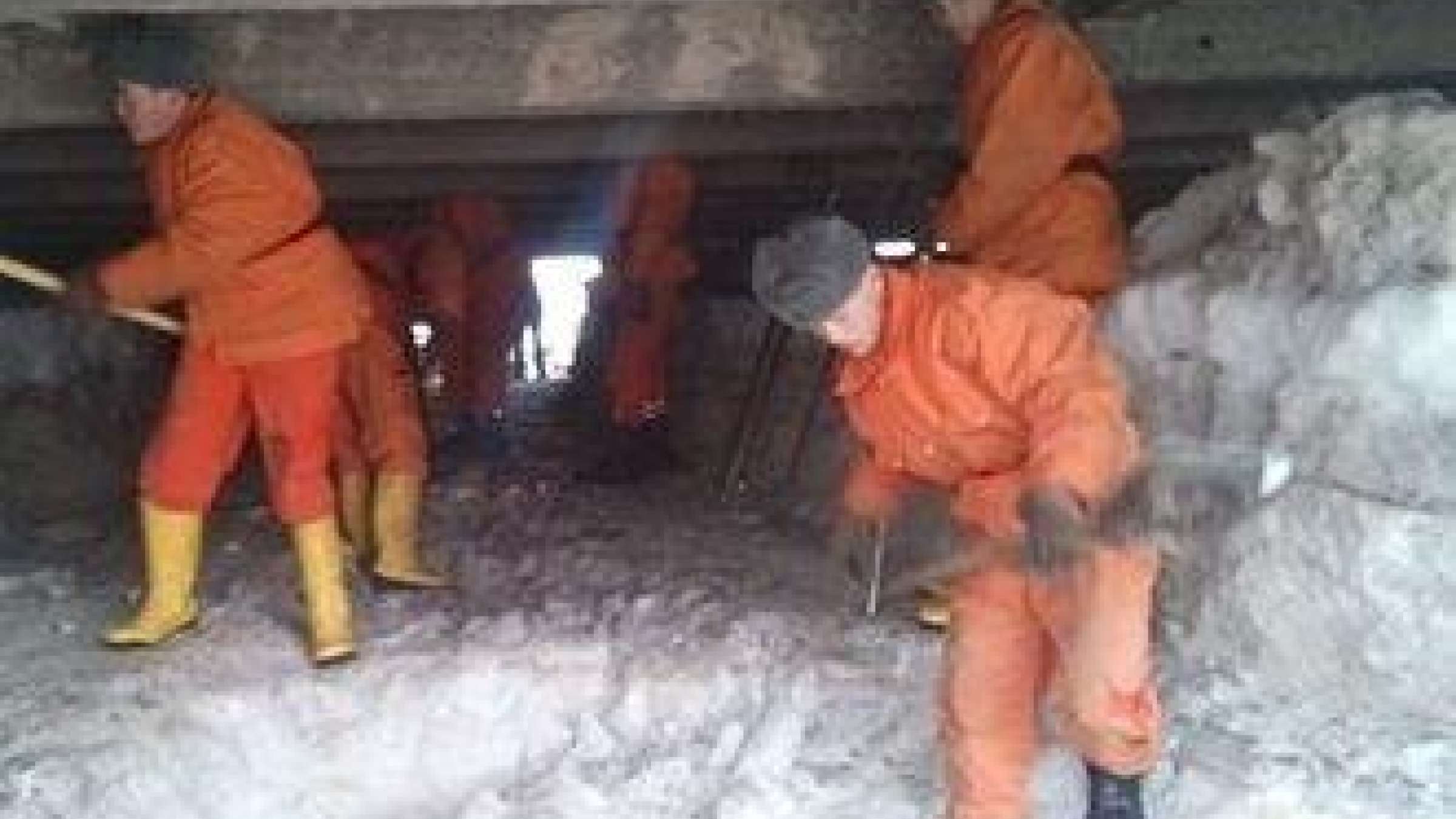 This winter, emergency workers moblilized to clear ice blocking a river bridge in Bishkek, reducing the risk of flooding (Photo: Ministry of Emergency Situations of Kyrgyzstan)

Mayor Kubanychbek Kulmatov has tasked his deputy with heading and coordinating disaster risk reduction work in Bishkek ahead of the possible establishment in 2016 of a Disaster Risk Reduction Council.

“The issue of disaster risk reduction in Bishkek should become a priority. Reduction of losses will only be possible when there is a plan of action covering a wide range of inter-related issues,” Vice-Mayor Dyushembiev said.

Mr. Dyushembiev has in turn assigned representatives of 16 city departments and services for training and guidance to strengthen risk assessment and action planning to build disaster resilience.

Bishkek is using the opportunity to develop a comprehensive disaster risk management strategy in areas ranging from legislative powers to resource mobilization, including for coordination.

The Sendai Framework, adopted at the World Conference on Disaster Risk Reduction in March, identifies local leadership and local capacity as key elements for building resilience over the next 15 years. Mayor Kulmatov and his team are part of an emerging group of city leaders in Central Asia showing the way in disaster risk reduction efforts.

Bishkek has seen its annual bill for direct economic losses continue to grow. The city of over one million people faces numerous challenges to protect its population and economic assets from hazards such as floods, earthquake, raising ground water levels, landslides and freezing winter weather.

“The available resources are hardly enough to cope with a small part of the losses that the city suffers every year,” said Mr. Nurlan Baraktabaev, the Head of the District Department of Emergencies. “We should focus more on reducing the losses by taking preventive measures, and it should be done throughout the year.”

Bishkek is one of eight cities taking part in the “Resilient Cities in Central Asia and South Caucasus” initiative, facilitated by UNISDR with financial support from the European Commission Humanitarian Aid and Civil Protection Department (ECHO).

The project supports cities to assess urban risk and vulnerabilities via a comprehensive set of 41 parameters before building plans to strengthen their resilience to disasters.

A first draft plan of action – the result of three days of intensive discussions and references to real-life challenges and solutions – has been submitted to Vice-Mayor Dyushembiev.

In addition to Bishkek, the other cities taking part in the initiative are: Karakol (Kyrgyzstan); Berd and Noyemberyan (Armenia); Gori and Tbilisi (Georgia); and Ridder and Ust-Kamenogorsk (Kazakhstan). The initiative is based on the Ten Essentials of UNISDR’s Making Cities Resilient Campaign, which now has 2,561 members globally.

The Head of UNISDR in Central Asia and the Southern Caucasus, Ms. Madhavi Malalgoda Ariyabandu, said the eight cities’ leaders offer an example for the region and the rest of the world in implementing the Sendai Framework at the municipal level.