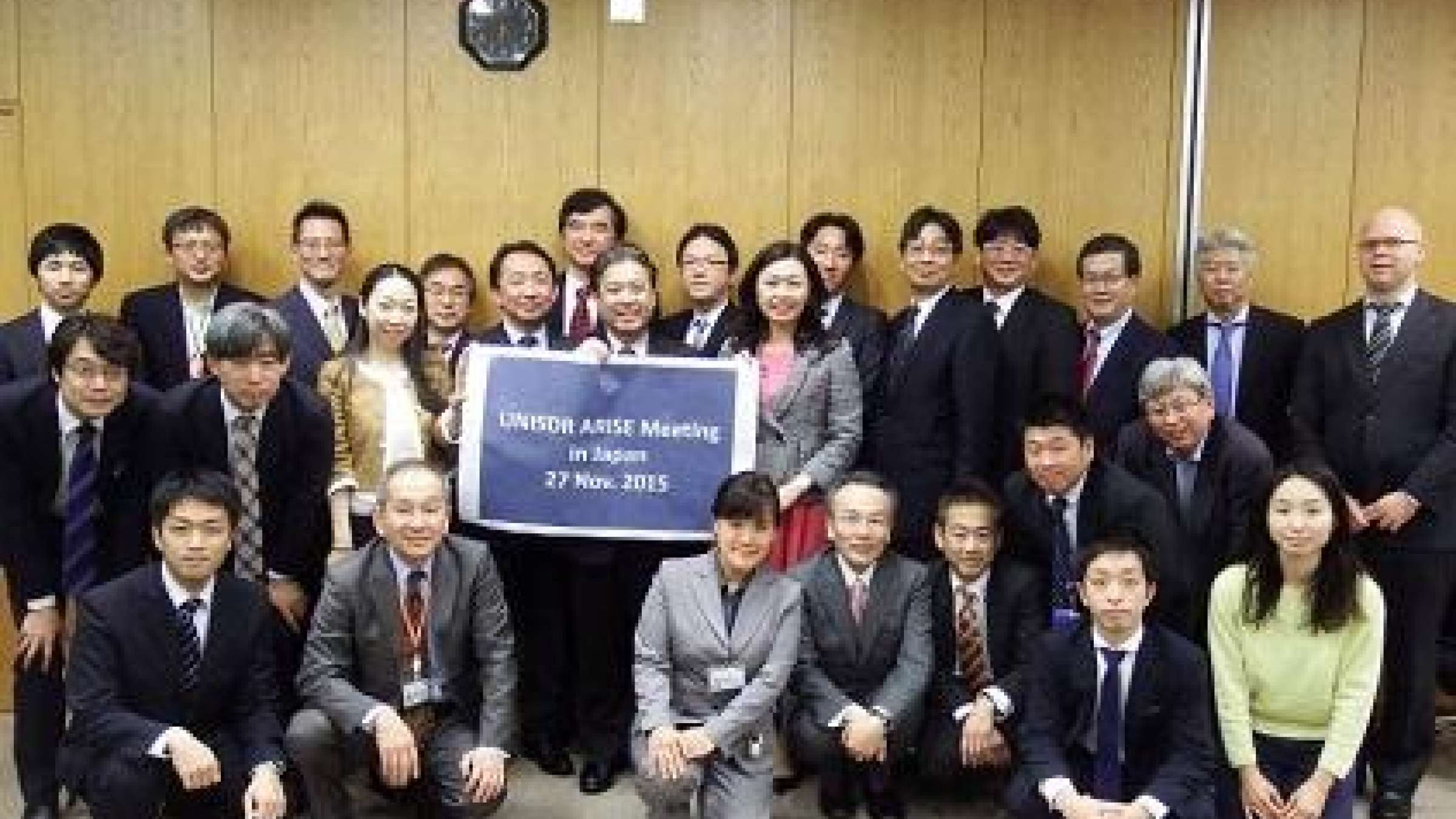 Members of the new ARISE network in Japan (Photo: UNISDR)

TOKYO, December 21, 2015 – Japanese members of the UNISDR Private Sector Alliance for Disaster Resilient Societies, known for short as ARISE, are moving ahead with implementation of the Sendai Framework for Disaster Risk Reduction, the global blueprint for reducing disaster losses adopted at a UN conference in Japan earlier this year.

Representatives of 20 members of ARISE have come together as a network in Japan, to collectively pursue their commitment to raise awareness, influence, share knowledge, and implement the Sendai Framework, and to share their knowledge and expertise in the Asia-Pacific region and beyond.

At a recent meeting of Japanese members of ARISE in Tokyo, Mr. Naohiro Nishiguchi, President of Japan Bosai Platform (JBP), an ARISE member organization, introduced JBP’s activities as part of UNISDR’s Resilient Cities Connect initiative and said: “As a branch of a global, UNISDR-led initiative, an ARISE network in Japan can offer a neutral ground in which the DRR and resilience-focused Japanese groups, of which there are many, can come together.”

JBP, which represents over 100 companies, as well as the KEIDANREN, a business federation reaching over 1,300 companies and over 150 national and regional associations, are already members of ARISE.

Mr. Hideaki Yahiro, Executive Manager of GCNJ and attending as an observer, welcomed the establishment of an ARISE network in Japan. “It is in our interest to fulfil the UN Global Compact’s mandate from the Sendai Framework, for DRR and resilience in the private sector to be promoted long-term by a dedicated organization linked to UNISDR,” he said.

Mr. Satoru Nishikawa, a member of UNISDR’s advisory group on the Sendai Framework, also attending as an observer, said: “Japanese businesses have experience and substance to contribute, but currently their voice remains relatively unheard in multi-stakeholder discussions and potential government and community partners may find their services difficult to engage. ARISE can be the conduit that connects Japanese businesses to the world, and vice versa.”

Ms. Sandra Wu of Kokusai Kogyo, ARISE board member and focal point for Japan and Asia-Pacific, pledged to work to strengthen the network of DRR and resilience-promoting organizations in Japan, in order to contribute concretely towards the implementation of the Sendai Framework in the Asia-Pacific region and beyond.

ARISE was launched to support implementation of the Sendai Framework, which was adopted in March 2015, at the 3rd UN World Conference on Disaster Risk Reduction in Sendai, Japan.

The Sendai Framework seeks a substantial reduction in disaster losses over the next 15 years and promotes the full involvement of the private sector. The head of UNISDR, Ms. Margareta Wahlström, said: “This launch of the network in Japan closely follows the launch of ARISE network in the Philippines. UNISDR welcomes these concrete first steps towards private sector implementation of the Sendai Framework”.