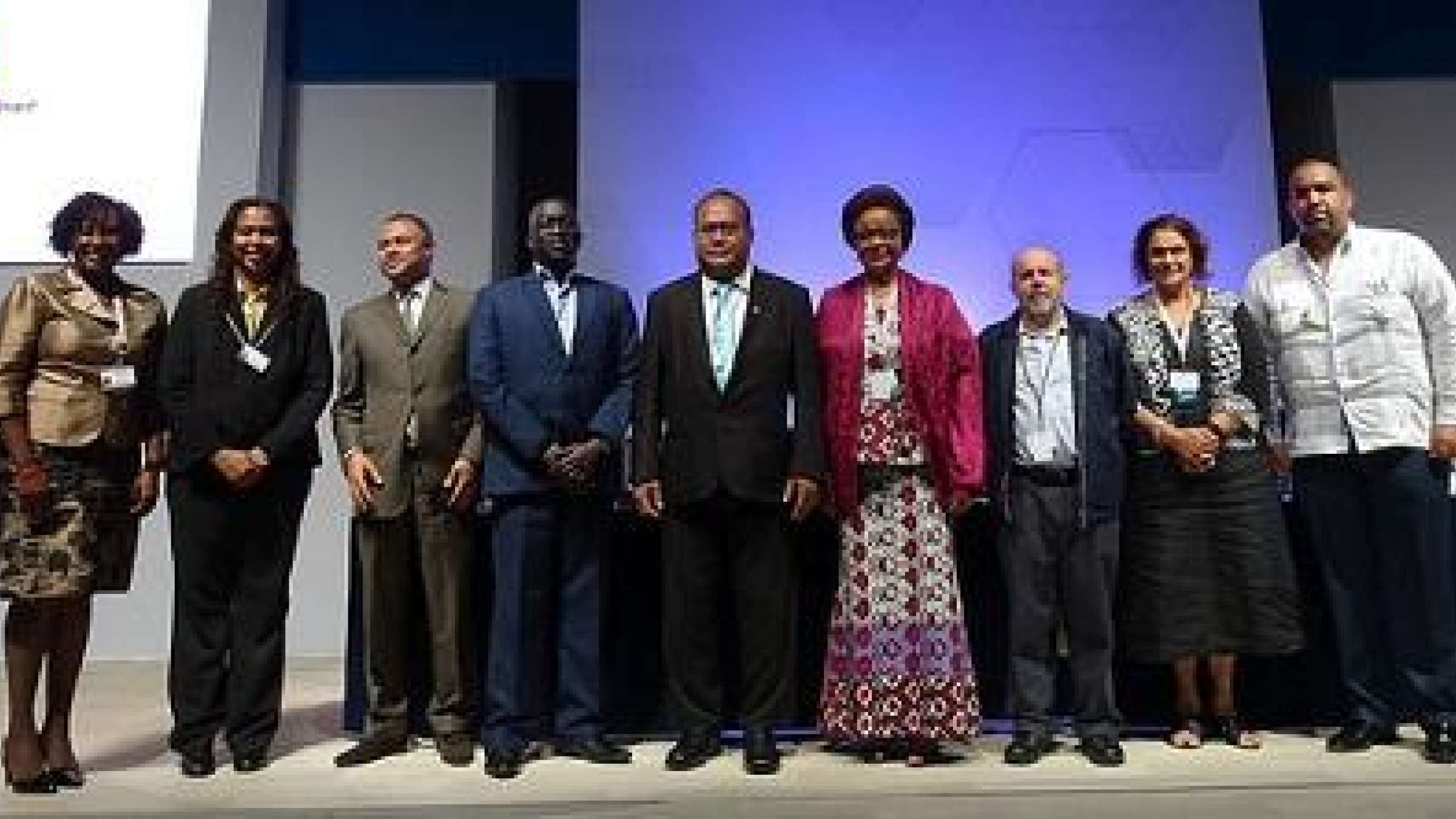 Participants at the Intra-ACP Forum, which took place during the Global Platform for Disaster Risk Reduction in Cancun, Mexico in May 2017 (photo: UNISDR)

21 June 2017, Geneva, Switzerland - The Africa, Caribbean and Pacific (ACP) Group of States, whose 79 members include some of the most disaster-prone and climate-vulnerable nations in the world, have prioritised the power of international cooperation to reduce the impact of natural hazards.

At its meeting during the 2017 Global Platform for Disaster Risk Reduction, which concluded on 26 May in Cancun, Mexico, the Intra-ACP Forum, jointly organized by the UNISDR and the ACP Secretariat, brought together Ministers from Haiti, Solomon Islands and South Sudan, along with representatives of UNISDR, the ACP Group of States, the European Parliament and European Commission, the African Union Commission, the Secretariat of the Pacific Community and CARICOM Secretariat. They shared lessons and best practices from Disaster Risk Reduction Programmes funded in ACP countries through the European Development Fund.

“This timely discussion is of pertinence to us all as we strive to build enhanced resilience and consolidate adaptation, particularly in environmentally vulnerable countries, through the effective implementation of comprehensive Natural Disaster Risk Reduction and Risk Management Programmes,” said Ambassador Leonard Ognimba, Deputy Secretary-General of the ACP Secretariat.

“Natural disasters are a recurring phenomenon in our regions. One only has to look at these examples of natural disasters over the last three years in our states, to get an appreciation of the unwelcome consequences of the loss of lives, the displaced people and livelihoods, the significant damage to the public and private infrastructure in our countries.”

He pointed to the impact of volcanic activity in Cabo Verde, earthquake in Tanzania and hurricanes and tropical cyclones in Africa (Chedza and Enawao in Madagascar), and in island states in the Caribbean and Pacific (Pam, Erika, Matthew and Donna).

Ambassador Ognimba underscored the political commitment made by ACP Heads of State and Government last year to strengthen coordination and dialogue among the 79 countries in all international fora. The aim, he recalled, is to enable the ACP Member States to work in favour of reforms to multilateral architecture that serves their interests and enhances their role in all areas of global governance, and thereby contribute to their development.

“We remain optimistic when we recall that our expectations can indeed be met, through strengthened and intensified coordination and policy dialogue,” he added.

The ACP comprises 48 countries in Sub-Saharan Africa, 16 in the Caribbean and 15 in the Pacific. Apart from Cuba, all of its members are signatories to the Cotonou Agreement, a partnership with the European Union.

Ambassador Ognimba underlined the opportunities provided by the Cotonou Agreement and emphasized its foundation for collaboration with the EU, ACP regional institutions and the UN organisations, regarding issues related to the understanding of natural disaster risks; the adoption of strategies to enhance the process of risk assessment and identification; the promotion of capacity building and mainstreaming of disaster risk reduction; the development of policies to promote initiatives of risk transfer, and post disaster recovery and long-term reconstruction in Member States.

In the wake of the meeting, Mr. Robert Glasser, Special Representative of the UN Secretary-General for Disaster Risk Reduction and head of UNISDR, underlined the critically important role of international partnerships, and UNISDR’s commitment to further consolidate this process.

“The Sendai Framework for Disaster Risk Reduction, adopted by the international community in 2015, makes this crystal clear,” he said. “By working together, we can achieve enhanced resilience to hazards affecting populations around the world, and help prevent them from spiralling into disasters.”

In their concluding remarks, H.E. Mr. Enrique Guerrero Salom, Member of European Parliament and Mr. Johannes Luchner, Director of Emergency Management at the European Commission’s Directorate-General for European Civil Protection and Humanitarian Aid Operations (ECHO) both noted the need to work to mainstream disaster risk reduction into all policies, including public and private investments.

The session underscored the need for shared responsibility to reduce risk, based on varying capabilities, and the representatives of the ACP, UNISDR, European Commission, Pacific Community, CARICOM and ECCAS committed to continue working together with other international and ACP regional institutions, to achieve the targets of the Sendai Framework, by 2030.

The event was convened as part of the "Building Disaster Resilience to Natural Hazards in Sub-Saharan African Regions, Countries and Communities" programme (funded by the European Union (EU) with EUR 80 million, for a five-year implementation period in Africa until 2020, as part of a dedicated cooperation for disaster risk reduction between the EU and ACP. This cooperation also includes three other disaster risk reduction programmes supporting the ACP Group of States with additional funding from the 10th European Development Fund (EDF) of EUR 100 million.