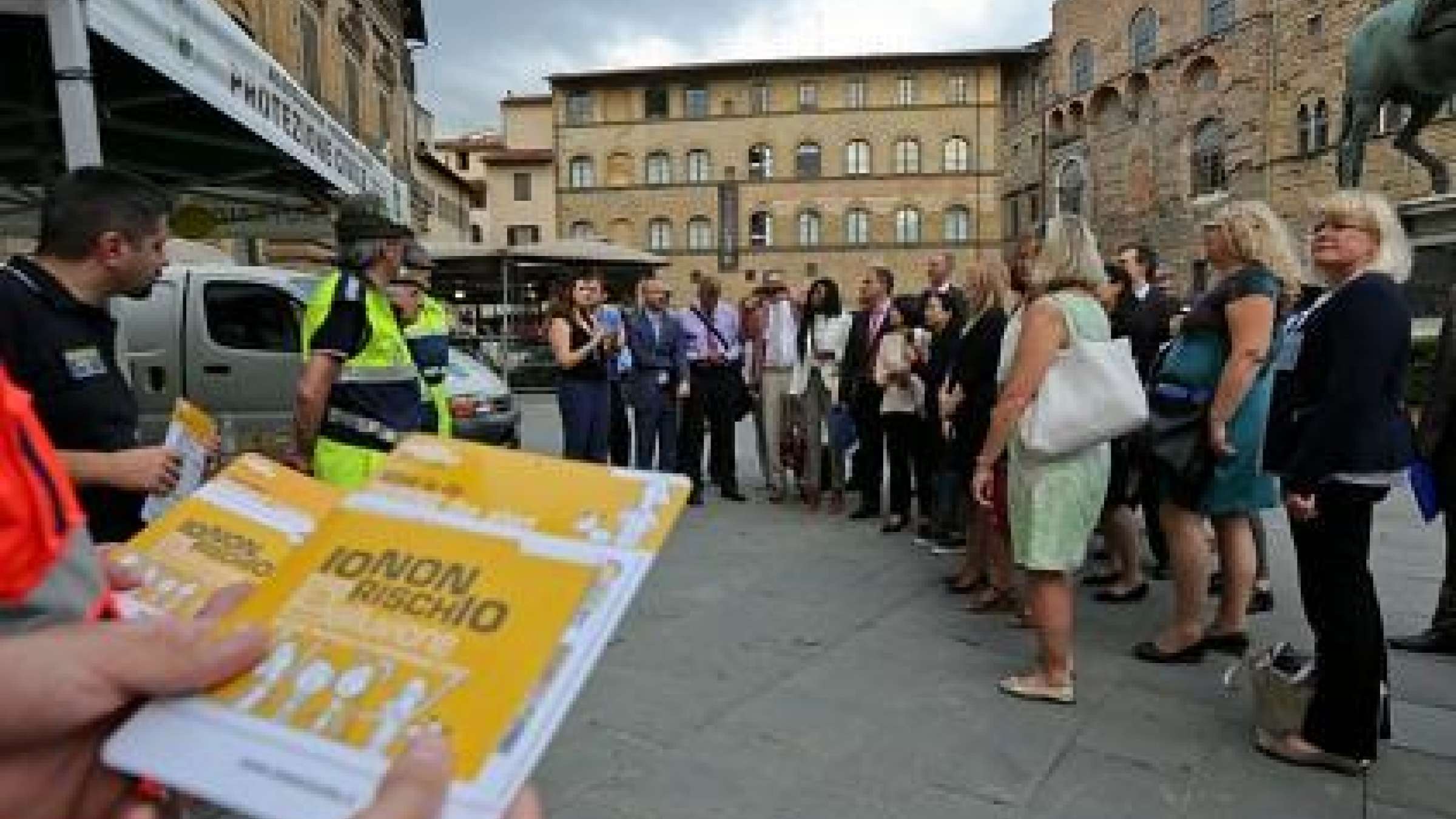 Participants at the Florence High-Level Forum meet with the Italian Civil Protection agency.

FLORENCE, 17 June, 2016 - Ministers, national government officials, mayors and representatives of the United Nations agreed today in Florence on a raft of actions that will make cities more resilient against disasters.

Participants were attending a two day High Level Forum on “Implementing the Sendai Framework For Disaster Risk Reduction at the Local Level“ in Florence, Italy.

Welcoming the outcome, the President of the European Committee of the Regions, Mr. Markku Markkula, said: "As our climate changes, we must learn to live with and adapt to more regular and severe disasters linked to natural hazards.

“Local and regional governments are at the frontline and many have a wealth of knowledge which needs to be shared. This is what our cooperation with the UNISDR is all about: we need to think big and act local. We need to cooperate locally, nationally and globally to protect our communities and build resilience against disasters".

This was the first time that mayors and representatives of municipalities had the chance to discuss how to implement the Sendai Framework, a 15-year global plan to reduce existing disaster risk and prevent new ones at local level.

In the outcome document, “The Florence Way Forward,” participants recognized the importance of coherence at local level to complement overall implementation of the 2030 Agenda for Sustainable Development and the Paris Agreement on climate change.

“Mayors and local partners are not only at the frontlines of disasters they are also the ones who implement budgets that can considerably reduce or increase disaster risks,” he said.

Among the commitments contained in “The Florence Way Forward” declaration, mayors and officials agreed to share good practices among cities and countries on flood prevention and mitigation, to improve their drainage and early warning systems and to fully use mobile technology to better communicate on disaster risk.

They recommended to allocate adequate financial resources for prevention at local and regional level , to increase the availability of risk information to improve planning and to better engage the private sector to understand local risks. Specific references were also made to the resilience of heritage buildings not only as an asset to protect, but also as part of the resilience of cities.

“Italy wants to play a global leading role to facilitate the process of the implementation of the Sendai Framework at local level and ‘The Florence Way Forward’ declaration adopted here today is the beginning of this commitment,” said Mr. Fabrizzio Cuccio, Head of Italian Civil Protection who left the Florence meeting early to assist in the management of the wildfires raging in Sicily near Palermo.

The Florence Way Forward document will be taken to the UN Conference on Housing and Sustainable Urban Development (Habitat III) to be held in Ecuador, in October and the next Global Platform on Disaster Risk Reduction in Mexico in May 2017.

Also at the forum, the UN Trust Fund for Human Security announced its support for a new project which will focus on cities from Mauritania and Tunisia. Speaking at the Forum, Ms. Mehrnaz Mostafavi, Chief of Human Security Unit at United Nations said: “The Sendai Framework highlights many of the core principles of human security. It highlights the need to strengthen cooperation to build local and national resilience and to facilitate the transfer of technology and financial assistance.

“The UN Trust Fund is proud to acknowledge the approval of its latest programme to be led by UNISDR, and I hope that the programme will develop the capacities of local institutions"